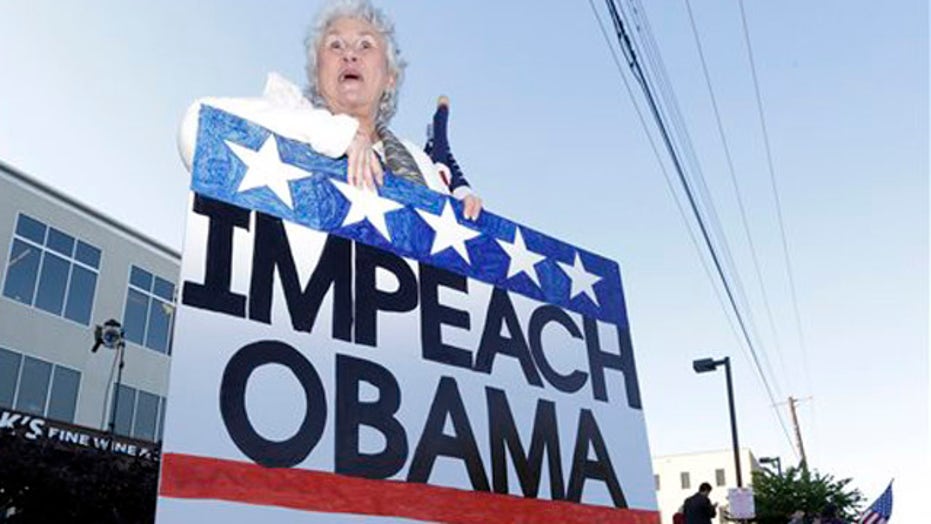 Is President Obama toxic for the Democratic Party?

Ann Coulter on the latest elections

This is a rush transcript from "Hannity," November 6, 2013. This copy may not be in its final form and may be updated.

SEAN HANNITY, HOST: And welcome back to "Hannity." So if there's any question about how toxic the president is and his health care overhaul be (ph) coming (ph) to the left, look no further than last night's Virginia gubernatorial election results, where the GOP candidate nearly pulled off a monumental upset.

Now, although the Democrat had the support from the president, Joe Biden and Clintons, and despite the fact that the GOP in this case was outspent by a whopping $14 million dollars, Terry McAuliffe just barely defeated Attorney General Ken Cuccinelli, who was down double digits before making the ObamaCare train wreck the big issue of the campaign.

KEN CUCCINELLI, R-VA ATTORNEY GENERAL, CANDIDATE FOR GOV.: We said this race was a referendum on "Obama care." And although I lost, tonight you sent a message to the president of the United States that you believe...

CUCCINELLI: ... that Virginia understands that ObamaCare is a failure and that you want to be in charge of your health care, and not the government!

Despite being outspent by an unprecedented $15 million, this race came down to the wire because of ObamaCare. That message will go out across America tonight.

HANNITY: I think it will, as well. And based on the impact that the law had last night, I think the effect on the upcoming elections is going to be very catastrophic for the left.

Here with reaction, author of "Never Trust a Liberal Over Three," the always outspoken Ann Coulter. Here's my quick -- how are you, Coulter? Good to see you. My quick analysis...

HANNITY: All right, so we learned the day of the election that the libertarian candidate in the race is funded by an Obama bundler. That's issue number one.

Number two, we see all the money that was poured in by Planned Parenthood, by labor unions, environmentalists. He had all the support of all the Democrats. The establishment seemed to abandon Cuccinelli. They gave $9 million to the current governor when he ran in 2009. Then you got a governor that's scandal-plagued, and the GOP raised taxes. Everybody's getting this wrong. What's your take?

COULTER: Yes. Actually, I think all of the elections yesterday illustrate the point of the first part of my new book, particularly in Virginia. You got them all. And that is -- look, I'm a conservative Republican, but any Republican is better than any Democrat. And Republicans really have to concentrate on winning.

Cuccinelli was hurt by, number one, the third party candidate, a libertarian, as you say, we find out at the last minute being heavily funded by Democrats. Oh, that's a surprise. I think the same thing of the alleged Tea Party candidate running against Mitch McConnell in Kentucky, I might add.

You also have, for lack of a better term, Tea Party activists who hurt Cuccinelli by nominating a wonderful black Christian minister for the lieutenant candidate (sic) spot. I love him, but that's not a strong candidate in a state when you're running for election. You need soccer moms, who are not our fellow Christian conservatives.

The lieutenant governor, wonderful man, not a good candidate, lost by something like 54 to 44 percent. It was whopping. If we had had a stronger lieutenant governor, that would have helped Cuccinelli. As you say, the RNC, the establishment, let Cuccinelli down. So he got, you know, everybody being hurt by this.

If we could just move up north to New Jersey, Chris Christie -- everybody knew he was going to win. He's charismatic. He's popular. Congratulations to him.

But he ran the table. If he had held -- not held a special election for the Senate seat to replace Frank Lautenberg, and last night, the vote had been between Steve Lonegan and Cory Booker, Lonegan, the Republican, would have won. But his ego got in the way, and there goes another Senate seat!

HANNITY: Listen, I'm as aggravated -- there's a coronation today going on for Chris Christie. It's almost -- the exit poll shows that he wouldn't beat Hillary Clinton on the biggest night of his political life. Here's a guy -- how -- how does he win with some of the appointments he's made? The economy in New Jersey is nothing to brag about. He's wrong in terms of the conservative base on immigration, on guns, on the economy, on green technology being the future.

How does he win in a red state? Everyone's making this prediction today, and I -- they're so wrong, I can't even believe it!

COULTER: Well, as you know, I would defend him on pretty much everything except when he came out for amnesty. And I just think that is a mistake for our party. The Republican Party is the party of the middle class. We are not the party of Wall Street. When Republicans who come out for amnesty are doing the bidding for the plutocrats and the Wall Street crowd and the Hollywood crowd who want cheap maids and nannies and not for the working class Americans, blacks and Hispanics. That's our party. We're the populist party. I think that's a big mistake. I think it's wrong for the country. I think it's wrong for the Republican Party.

HANNITY: Wait a minute, Ann! Hang on a second.

COULTER: But I'd say about Christie -- you know, George Pataki won three times in a state bluer than New Jersey. I know the media want to anoint Christie our nominee, but we do still have to have the primaries. So he'll be a strong candidate...

COULTER: ... I don't know if he's our strongest candidate.

HANNITY: ... Washington that it's got to be more like Trenton, New Jersey. And anybody who knows about Trenton, you don't want Washington to be like Trenton. But what bothers me more about -- about Governor Christie -- and I'm with you. If I was in New Jersey, I would have voted for Christie, OK?

HANNITY: But the point is, he's trashing Rand. He's trashing Cruz. But I didn't hear him call President Obama a liar on health care. And that bothers me. I mean, he's giving him a big bear hug a week before the election with Romney last year. So I'm a little -- I just think Christie...

COULTER: No, and in addition...

COULTER: In addition to wanting to run up some huge victory for himself, so he has a special election to replace Frank Lautenberg, you know, a month before his election -- so as I say, Lonegan was closing in on Cory Booker. A lot was coming out about Cory Booker that we didn't know. Lonegan, a very strong Tea Party candidate, by the way -- he did incredibly well in a state like New Jersey. If it had been held at the same time that Chris Christie is winning this massive victory, I think Lonegan would have won.

In addition to that, how about Chris Christie spreading some the wealth and going down and spending one day campaigning for Ken Cuccinelli?

But as we saw with Chris Christie's convention speech, it's all about Chris Christie. I mean, that was the most disappointing keynote convention speech of my life. And I flew into Tampa just to see Chris Christie because he's so charismatic. He is bright. We expected him to be the street fighter. And look, maybe he'll be the nominee. He has a lot of good things going for him. The only thing I can't forgive him for is amnesty.

HANNITY: I tell you -- he's got problems. Wait until they dig down deep into the appointments. Wait'll they did down -- he can go campaign for Lindsey Graham all he wants, but he seems to be at war, like the establishment, against conservative Tea Party members. Do you not see that?

Republicans, let's concentrate on winning back the Senate and taking out -- as you keep pointing out, thank you, Sean Hannity -- Mary Landrieu in Arkansas -- or rather, in Louisiana, Mark Pryor in Arkansas, replacing the Democrat seat in West Virginia, Mark Begich in Alaska, Al Franken in Minnesota, Baucus in Montana.

There are a lot of Democratic seats we should be able to flip to the Republicans next year, but not if Republicans are going to run very strong Christian ministers who have said some spicy (ph) things about homosexuality -- we do have to get the soccer mom votes -- and not if the RNC is not going to support a magnificent Republican like Ken Cuccinelli, and not if strong Republican like Christie are in it all for themselves and hold a special election, allowing a Senate seat to be sacrificed for no reason but so that Christie can run up his numbers.

HANNITY: All right, Ann Coulter, good to see you. Thanks for being with us.