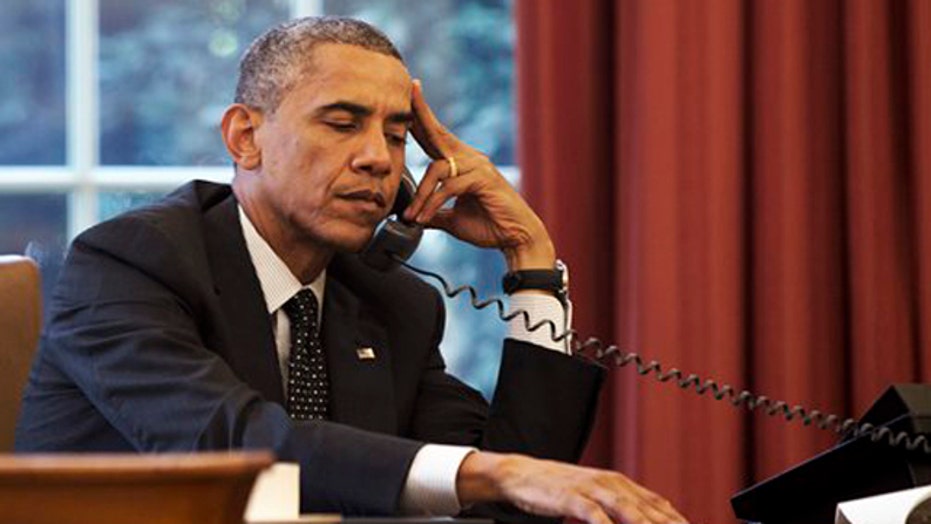 Is Obama really engaged in the global crises?

This is a rush transcript from "The Kelly File," August 8, 2014. This copy may not be in its final form and may be updated.

SHANNON BREAM, GUEST HOST: We are also learning tonight that the president has now officially notified the House of Representatives, sending an official breakdown of the actions he authorized in Iraq that he says are, quote, "In the national security and foreign policy interests of the United States."

Charles Krauthammer is a Fox News contributor, syndicated columnist and author of "Things that Matter." A book now enjoying its 10 months on the New York Times bestseller list, a great summer read.

Charles, thanks for joining us tonight.

BREAM: What do you make of how the president is navigating this thus far?

KRAUTHAMMER: Look, I'll give him credit for one half of the policy, which is to try to put great pressure on Baghdad to replace Maliki. That's what all the talk about unity government means, getting rid of him so that you can have some kind of government in Baghdad that is a reliable partner that will bring in Sunnis and Kurds.

But that's completely different from what's happening in the north. And for the presidential spokeswoman to say, well, we're not going to do anything major, it all has to be done by Baghdad, all we're here is to help them to repel ISIS, that's ridiculous.

There is nothing coming out of Baghdad. That army fell apart entirely at Mosul. The Kurds are really tough fighters. Peshmerga have held off a successive enemies for years. But they have no ammunition. They have very obsolete weapons. They're trying to hold a 600-mile front against ISIS on the move. And they could do it if they had the bullets. And Obama, this administration has refused to send them anything, saying it all has to go through Baghdad. And of course, anything we send to Baghdad never makes it to Kurdistan. The real issue here is, will we supply the Kurds with the weapons they need to fight ISIS and hold the line?

And I also agree with the general -- just one more point. These are pinprick strikes. This is a 600 mile front. ISIS is an army on the move, very strong and armed now with all the weapons. Advanced American weapons it captured in Mosul. This cannot be done if you're going to have an air campaign, you're not going to hit an artillery piece there and a truck over there. That's preposterous. Either do it seriously or you don't do it at all.

BREAM: And Charles, I have a good source who says that the Kurdish government and leaders there tried to put in an order with a U.S. manufacturer that could provide them ammunition and guns. But that company would need an export agreement from the State Department, they couldn't get it. Because the State Department apparently my understanding, if the indication is, it had to come through the Iraqi government. And, again, this deference to trying to keep the country together, to try to defer to a centralized Iraqi government. But the Kurds ordered that stuff months ago and couldn't get it. So where do we, you know, streamline the policy within this administration so that they can get the help without having to take that detour?

KRAUTHAMMER: Here's a president, secretary of state, talking about potential genocide, which we can see happening in front of our eyes. Here's a friendly ally, the Kurds, whom in the '90s, a democratic president protected with airpower for a decade. Here are people who want to fight ISIS. And these ridiculous legalisms that this administration puts in the way of supplying them is simply incomprehensible. If a president gave the order tonight, we could have the weapons that the Kurds need, any tank weapons, and all kinds of low caliber stuff that they need, which is all they need, RPGs.

If we could -- if the president gave the order, it could arrive from Germany where we have our supplies, within one day, and the idea that there are legalism. And here's what the president says and his spokesmen say. As you say, everything has to go through Baghdad. We know that the Baghdad government led by this Shiite chieftain, Maliki, has refused to give the Kurds anything since December 2013.

The idea that all the aid has to go through Baghdad is really preposterous. It's a way of saying, we are not going to supply the Kurds. And they are there -- all they want is American help, not in the form of American troops, just the weaponry.

BREAM: Charles, to be fair, this president did campaign on getting out of Iraq, getting out of Afghanistan. And he's been under a lot of pressure to do that. It seems that he personally, politics aside, his conviction was we didn't need to be there. We needed the transition out. But he also has the political pressure in addition to that.

Now we're at the stage where we are with ISIS. What does he do? How does he -- is it possible for him to justify this to both sides of the aisle in a way that will allow him to do enough that could actually clean up this tragic disaster?

KRAUTHAMMER: This is a president in the sixth year of his presidency. He will never have to run for reelection again. If he allows himself to make the great decisions of our time -- and this is a large decision -- if ISIS succeeds in Kurdistan, it can and will probably succeed everywhere else. And then we are going to have a radical Islamist State that Al Qaeda has ex-communicated because of its savagery, in charge. If he has to make those decisions on the grounds of politics, this country is in deep trouble.

BREAM: Charles, always good to see you. Thank you, sir.