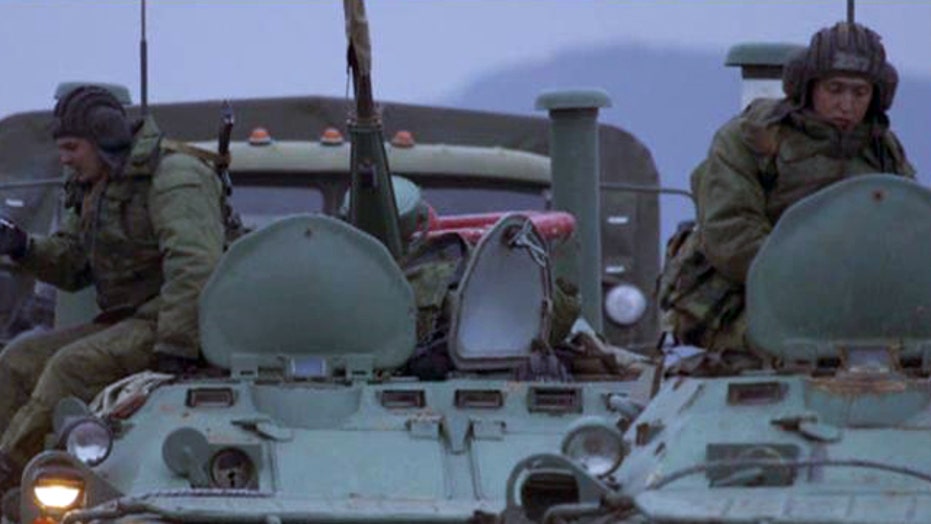 Is it too late to warn Russia to stay out of Ukraine?

This is a rush transcript from "The Kelly File," February 28, 2014. This copy may not be in its final form and may be updated.

Welcome to "The Kelly File," I'm Shannon Bream in for Megyn Kelly.

Thursday, it was news of fighter jets on the border, and a massive military exercise. But we're now seeing the video that has send to show at least a dozen Russian combat helicopters crossing the border as well as masked gunmen believed to be working for the rest of the military who have already taken control of two airports in various other facilities. The Ukrainian ambassador saying there are some 2,000 Russian troops now on the ground. And while President Obama sent the Kremlin a direct message in a news conference, many exports are concerned that this latest warning is too little, too late.

PRESIDENT BARACK OBAMA: We are now deeply concerned by reports of military movements taken by the Russian federation inside of Ukraine.

Any violation of Ukraine's sovereignty and territorial integrity would be deeply destabilizing.

The United States will stand with international community in affirming that there will be costs for any military intervention in Ukraine.

BREAM: Simon Marks is president and chief correspondent for Feature Story News. All right, Simon, you heard the president's statement tonight. He says there will be costs. What did that mean?

SIMON MARKS, FEATURE STORY, PRESIDENT AND CHIEF CORRESPONDENT: Well, I think like so many other people watching that statement, Shannon, my reaction when it ended was, is that it? I mean, he says there will be costs, he did not delineate those costs in that appearance of the White House. Although afterwards, his advisers were briefing reporters and saying it might mean that we'll terminate some trade discussions with Russia. It might mean that President Obama will not attend the G8 Summit due to be held in Russia in a few weeks' time. But does anyone seriously think that that is a proportional response to what we've witnessed over the last 24 hours? In essence, the beginning of the military annexation of the Crimean Peninsula by Russian forces. I don't know there are many foreign policy analysts that think that is a proportionate response.

BREAM: Well, there are number of numbers of Congress from both sides of the aisle who have put out statements tonight. And they come out and said, we support the President, we stand ready to bipartisan way to come together on sanctions or any other way that we can to try to intervene in the situation and back Russia off. Would a move from Capitol Hill be anymore proportional in your estimation?

MARKS: Look, I think that there are certainly things that can and perhaps should be done in terms of putting together a packet of meaty sanctions in terms of considering some kind of military maneuvers, aimed at sending a very clear message to Moscow that actually when the United States says, as Ambassador Samantha Power at the United Nations said a few hours ago, that it's going to stand with the people of Ukraine. That actually means something and gets translated into tangible action.

Many international observers are looking at this and probably Vladimir Putin himself say, at the end of the day, the Americans are not really going to do anything.

BREAM: Well, it is very complicated on so many levels. Simon, thank you for giving us your expertise tonight. Good to see you.

Joining us now for more on this, Peter Brookes, a senior fellow of national security affairs with the Heritage Foundation and former deputy assistant Defense secretary.

All right, Peter, this is a delicate situation in many, many ways. We have a complicated relationship with Russia, we need them right now on things like Iran, on Syria. They are voting member of the U.N. Security Council. I mean, how far publicly can the president go when we need to be aligned with them on other issues?

PETER BROOKES, NATIONAL SECURITY AFFAIRS SENIOR FELLOW: Yes, Shannon, I mean, where is the reset button when you need it? You know, this administration's policy towards Russia has been a failure. I think what the president could have done is come out earlier as you mentioned in your lead-in, you know, too little, too late. There is some value in strategic ambiguity, because you're trying to deter the Russians from going any further. You're trying to involve yourself in preventive diplomacy, but this should have been done a long time ago. And unfortunately this administration, like so many other issues, is behind the power curve.

BREAM: All right, we want to play a little bit about what Charles Krauthammer had to say tonight, reacting after he, along with millions of others, watch the President's statement he made live from the White House. Here's Charles.

CHARLES KRAUTHAMMER, FOX NEWS CONTRIBUTOR: The Ukrainians -- and I think everybody is shocked by the weakness of Obama's statement. I find it rather staggering. And the fact that we've done nothing of any importance.

BREAM: What else can we do at this point, knowing all the other issues on the table as Charles points out. He and many others would view this as weakness. But the White House apparently must have felt, it needed to say something, is it better to say something to be viewed as weak or say nothing at all and wait?

BROOKES: Well, unfortunately, yes, there are challenges in each one of those approaches. And unfortunately, the administration probably has not done the right thing up to this point. There is -- you know there's going to be private talks going on behind the scenes. And then the President felt like those private talks probably would not being very effective. He doesn't have an ambassador right now in Russia and felt like he needed to come out and say something now to the American domestic audience but to the Russians.

But in truth, a lot of these things are out of our hands. If there's some sort of violence within Ukraine against ethnic Russians, Russian citizens, the Russian military basis. I think that it's going to get a lot worse in places beyond Crimea. You have 150,000 troops exercising in Western Russia right across the border. We've seen some troops coming into Crimea -- not a lot, only 2,000 -- but there are rumors, and you know, this is breaking news, Shannon that they're taking positions around the city, around things like the television station, radio station. Are they there to protect Russian assets at the -- Baltic Sea Flea headquarters and protect the dependents and the sailors? Or are they planning on doing something else beyond that and may we see more Russian troops.

So, this thing could easily spiral out of control if there is some sort of crises or some sort of violence within Ukraine, especially against Russians. Putin has shown in the past that he will act on these things.

BREAM: Well, and it sounds like, it was the Russian ambassador to the U.N. I believe today who made statements saying, basically this is the EU and the U.S.'s fault that this exploded that way that it has. That the agreements that were set up in Ukraine are not being followed. But who is not following them?

BROOKES: Right. Well, of course, you know, there is a lot of finger- pointing going on. This is a very dangerous situation. You know, the Ukraine is critical to Russia. We need to be sober and understand that they consider us to be historically tied to Russia. It is this strategic soft under-belly of Russia. The Nazis came across Ukraine into Russia in World War II. Some of Napoleon's army passed through there. This is a non-negotiable issue. They have a level of paranoia about the United States and NATO that exists. I mean, in 2005, Putin said that the greatest geo-political tragedy of the 20th century was the fall of the Soviet Union. I mean, that didn't make my list but it gives you an idea of the mindset of the Kremlin. This is a very important issue, we need to be sober about that. We need to get out in front of it and prevent this from the escalating and becoming a more significant crisis that might involve armed conflict.

BREAM: Well, at this point it seems the one thing the U.S. and European allies and others in NATO seemed to be united on is making sure that the Ukrainian people's wishes are carried out. We'll see how that plays out with Putin doing a lot of posturing. Peter, good to see you. Thank you.