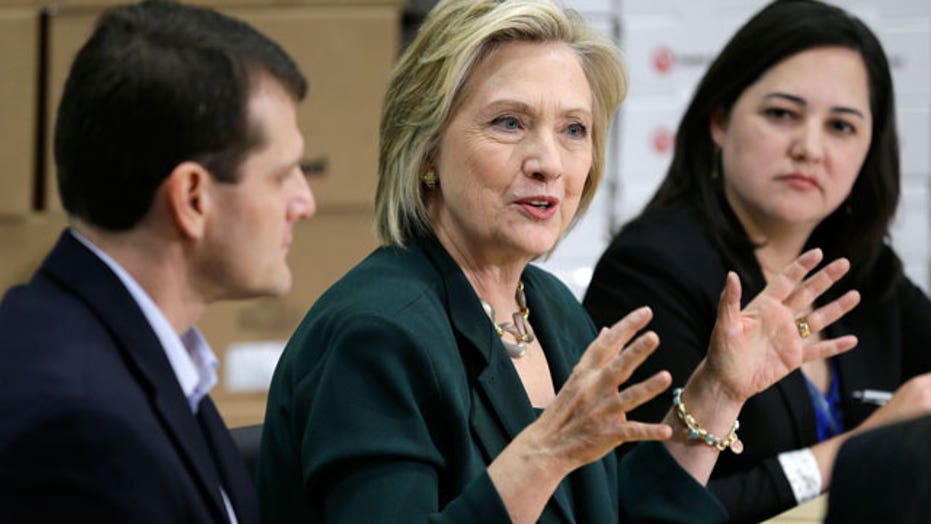 A closer look at the rocky rollout on 'The Kelly File'

This is a rush transcript from "The Kelly File," April 16, 2015. This copy may not be in its final form and may be updated.

MEGYN KELLY, HOST: Joining me now with more, Marc Thiessen who is a Fox News contributor, a fellow at the American Enterprise Institute and a former chief speech writer for President George W. Bush.

Marc, good to see you.

KELLY: So the real people, like the whole listening tour so she can understand real ordinary people. Apparently she's really going to only understand people who work for Planned Parenthood and drove around Vice President Joe Biden and were Democratic campaign operatives.

THIESSEN: No, exactly. This was supposed to be -- they specifically decided to launch this campaign with a listening tour to listen to ordinary Americans. So she pulls in with the Scooby van into a Chipotle where there are actual real Americans there. And she puts on the big sunglasses to try to avoid being recognized.

But then when she goes to a coffee shop where she is supposed to meet ordinary Americans, they're planted Democrat operatives. They're fake real Americans. I mean, she actually staged a coffee shop visit.

KELLY: I think they're real Americans.

THIESSEN: They're real Americans, but they're fake --

THIESSEN: -- ordinary Americans who she stumbled across. Who does that?  Who fakes a visit to a coffee shop? Are they going to vet everybody?

KELLY: So, apparently we've been looking into this. Ed Henry says a lot of campaigns do this. But what they typically do is they pick real people. And then they vet them so that the candidate doesn't to have sit down with, as it turns out, with convicted felon, you know, something like to make sure this is an appropriate person for, you know, someone like Hillary Clinton to be sitting with, and then they go forward. But this business of pulling out these specific campaign operatives. You know, I mean, Democratic operatives, and then pawning them off as just regular folks seems a little bit less common.

THIESSEN: Well, I guess she doesn't want to be asked about her server by an ordinary American or something like that. But look, this just shows that her own campaign is worried about her interaction with ordinary Americans. They don't even trust her to meet an ordinary American. You can't vet everybody you meet across the campaign trail in a president election. They'll going to be exhausted if they try to vet every single person they meet over the next 16 to 18 months.

KELLY: Well, and that gets to the heart of it. Because, you know, here we are, day five of her campaign. And where is the -- you know, Lanny Davis told me that that little, you know, the commercial she came out with on Sunday whatever it was, which was sort of an introduction, that she was going to be making a big speech like with all the policies. Have we heard that? Like, what was -- she made some remarks? Was that it? I mean, should we be confused about this?

THIESSEN: Also, in that video was also an example of fake real Americans. So they had Democrat operatives, on abortion lobbyists who was the director of Wendy Davis' campaign in Texas was there posing as a grandma doing potatoes. Another guy was an operative for Iowa Governor Tom Vilsack. So, they're even putting political operatives into her campaign video as ordinary Americans.

So, this is just constant fakery.

KELLY: She's getting hit for that. And then you heard Trace mention this business about, she made some comment about how she was speaking about immigration, illegal immigration, illegal immigrants coming to America, and they work and they pay into this system, some of them. And they don't really have any hope of ever getting that money back. And in that context she said that all of her grandparents came over, which isn't true. She only had one grand parent who was an immigrant to this country.

And then you saw this statement that Trace put up. Right? Her spokesman said -- admitting wasn't true after the fact -- quote, "Her grandparents always spoke about the immigrant experience and as a result, she has always thought of them as immigrants." OK? Now I can't help it. But that reminded me of the only other person who they say could really challenge her for this nomination, and that happens to be Elizabeth Warren who got into trouble for claiming she is part native-American when she isn't. Remember this explanation?

SEN. ELIZABETH WARREN, D-MASS.: My Aunt Bee has walked by that picture at least a thousand times, remarked that her father, my papaw, had high cheekbones like all the Indians do.

KELLY: Remember that? The mamaw and the papaw, they told her she was native-American so she believed she was, just like Hillary Clinton's grandparents spoke about their immigrant experience and she always thought of them as immigrants.

THIESSEN: Well, you know, you are what you believe you are in the Clinton world.

But look, I mean, this just shows, these, in her first week she is stumbling around like this. The big problem they face is she is no Bill Clinton. What Democrats are being promised is the old Clinton magic.  The Clintons are this great institution in the Democratic Party. And Bill Clinton doesn't need to have fake people operatives to interact with. He can interact with anyone. He is charming, he is affable. She has none of his charm and none of his political talent.

KELLY: Not according to Lanny Davis. I mean, Lanny Davis said she would charm the pants off you if she sits down with you and gives you the timing. Can I tell you, it's not just Lanny, because -- I don't have his permission to reveal this -- but I know a very powerful person, this is a Republican, who is familiar with Hillary Clinton and said they meet for drinks sometimes and she charms him too.

THIESSEN: Well, maybe she'll meet an ordinary American one of these days and we'll find out.

THIESSEN: You're absolutely right. You can't vet everybody in a presidential campaign. You're going to meet an ordinary American. She is going to meet Republicans. I mean, imagine that, I mean, the idea of a campaign is like you're trying to convince people in the center, on the other side to come along. I mean, all the Republicans out there want the old Reagan Democrats back. So, she ought to meet a Republican at some point and he might ask her a tough question like about her server or about Benghazi or about the Clinton Foundation. And she is going to have to deal with that.

I think this is big problem the Democrats have right now, is that they've betting everything on one horse. If that horse stumbles, they're in big trouble and so far they don't seem to be comfortable with her to let Hillary be Hillary. And they've got nobody else to fall back off.

KELLY: They got Elizabeth Warren, the mamaw and the papaw.

THIESSEN: Well, yes, absolutely. We could have the first Cherokee president.

KELLY: OK. Got to leave it at that, Marc. Great to see you.