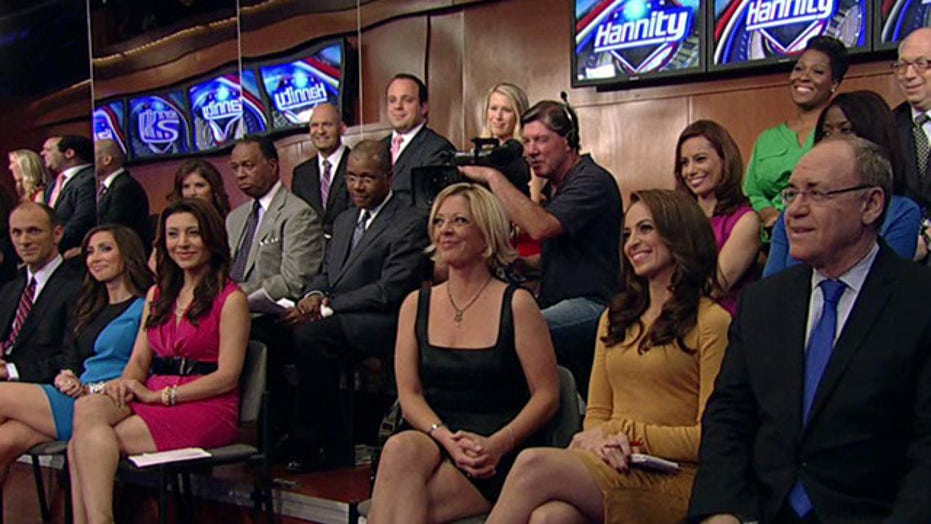 Is America heading for default?

Studio audience on how the drama will unfold in D.C.

This is a rush transcript from "Hannity," October 15, 2013. This copy may not be in its final form and may be updated.

SEAN HANNITY, HOST: Now with reaction to all you just heard, we welcome our wonderful, bright, studio audience, with Austan Goolsbee is here in the house tonight. All right, we're going to get to you, Austan, I promise.

Austan, the Republicans reduced this now to Congress, the president's staff, the president and the vice president, would be held to the same bill that the American people have. They'd have no subsidies. Is that unfair?

HANNITY: Is that unreasonable?

GOOLSBEE: That's not exactly what it is. The case that's happening here is there's no -- because they forced them into the exchange, unlike employers, where your employer pays a significant chunk of your health care costs, Congress doesn't have that. And that's why they put in these subsidies...

GOOLSBEE: ... so that it would match what everyone else...

GOOLSBEE: They would put 100 percent of the health care costs on employees, which is unlike every other large employer.

HANNITY: Jedediah Bila, 72 percent subsidy. The average American watching tonight, they're not getting a 72 percent...

I love how Republicans are called unreasonable in this whole process. They have essentially caved on everything! You're getting a debt ceiling hike without having any spending cuts. You're getting pretty much everything you want. And Barack Obama and Harry Reid to the end are saying, No, we're going to stand firm, we're not going to budge. How, in what sense are the Republicans being unreasonable at this point?

GOOLSBEE: In the same sense that if I go into McDonald's and the guy says, give me an extra five bucks and I won't spit on your onion rings, and I say, Well, wait a minute, you shouldn't be spitting on my onion rings, he says, OK, OK, let's make it 25 cents. Come on! This is -- make a consession.

HANNITY: The president of the United States wouldn't...

GOOLSBEE: It's unreasonable! You should not be playing games --

HANNITY: Wait a minute! He would negotiate with the mullahs...

GOOLSBEE: -- with default! It's crazy!

HANNITY: Mullahs -- he'll talk to the mullahs of Iran, the new president of Iran, but he -- you want to jump in? Go ahead.

HANNITY: No, not really. Yes?

AMBER BARNO, CONCERNED VETERANS FOR AMERICA: This is the clearest example of leadership failure. In the military, leaders are expected to lead by example. They're expected to not expect their subordinates to do something that they would not do themselves as leaders, and to make decisions based upon -- that will benefit the greater good.

What have we seen from Obama? He refuses to negotiate with Republicans. He thinks that he and the White House and his staff and Congress are above ObamaCare. And he continues to use military members and their families and veterans as political pawns for his own political gain.

HANNITY: All right, let me get the medical side of this. By the way, we do have some breaking news. The Senate has now adjourned until tomorrow at noon. There was some thought that Harry Reid might get the cloture process started tonight. He, in fact, did not. Probably past his bedtime.

Dr. Siegel, premiums are still on the rise. Jobs have been lost. Part-time jobs are increasing. The train wreck in terms of the inability of people to actually get on the website, nothing short of a disaster, $624 million -- billion disaster -- million, with an M. Sorry. And most Americans are against ObamaCare. But yet this is what we're getting rammed down our throat anyway. Reaction.

DR. MARC SIEGEL, FOX MEDICAL CONTRIBUTOR: ObamaCare is a cancer on the health care system and on our economy. We've been talking a lot about the state exchanges. They're clearly dysfunctional. You can't get online to one. If you managed to, you would say, I want to save money on premiums. Let me choose a bronze plan. Guess what the bronze plan doesn't have? It doesn't have a cap on out-of-pocket spending, meaning you can go bankrupt if you get sick.

This is the health care system that's been in place since the Eisenhower era that we rely on! On the political side, where's the master of the Senate here? I can't believe I'm hearing that President Obama is not meeting with Republicans today. Do you think Lyndon Johnson would have handled it this way? He would have been mixing it up and saying, let me offer you this, you offer me that.

BILA: He doesn't think he has to, that's why.

HANNITY: Let me give you one example of The Weekly Standard. Who's - - who -- what liberal -- not you, Austan -- wants to respond? Julie. All right. Here's a woman in Pennsylvania -- by the way, this is very typical. This is not an isolated incident. I have a whole page of examples. This is one woman who now -- and doesn't make a lot of money. And her premium - - she is going to pay $765 more a month than she's paying now.

What happened to the $2,500 savings? Why shouldn't that be part of this debate? The president won't talk about it.

JULIE ROGINSKY, DEMOCRATIC STRATEGY: Because of exactly what Austan just said. We've had this debate, by the way. We passed ObamaCare. You guys may not be happy with it, but it's the law of the land. The Supreme Court validated it. The president of the United States...

HANNITY: Now we're seeing the reality of it.

HANNITY: Wait a minute. Every promise was predicated on something that's not true!

ROGINSKY: Here's -- I'm going to say something to you right now that I said to you two weeks ago on this panel. I'm going to keep repeating it to you. What you're doing right now is you're giving false hope to your base, to the conservative Tea Party base out there, that this is doable. It's not. Stop holding the economy hostage...

DOUG SCHOEN, FOX CONTRIBUTOR: Isn't there larger play (ph) here that both sides have to come to the table? We have to get rid of subsidies for Congress. We have to fix ObamaCare, we have to deal with entitlement. And we have to do it as Americans coming together to solve problems, not as partisans.

HANNITY: Tell it to your president that won't negotiate!

SCHOEN: The president's wrong. The Republicans are wrong! The American people...

HANNITY: Why are the Republicans wrong?

SCHOEN: Why? Because they put forward a silly plan with Ted Cruz to defund a law that, as Julie said, has been passed. Bottom line...

SCHOEN: Right, but you got to be rational, right?

SAYEGH: The Democrats -- there are parts of what Doug said that are correct, and it does take two to tango in this mess. And I'm glad you can see that the president is as much to blame as the Republicans in Congress.

SCHOEN: Everyone's to blame. Everyone.

SAYEGH: ... as did Leon Panetta, by the way. His former defense secretary said today, we're governing by crisis, not by leadership and that calls on the president.

However, at this point, you had the Democrats reject a bipartisan plan between Susan Collins, the most liberal member of the Republican caucus in the Senate, and Joe Manchin, the most conservative Democrat -- came up with a plan. The Republicans were going along with it this weekend. The Democrats are the ones who rejected those exact reforms you talked about, Doug, that were actually common sense.

SCHOEN: I would have liked to have seen that passed. We should have had it done.

LAUREN SIMONETTI, FOX BUSINESS: What all of this is doing is essentially holding the American people hostage at this point. Look at the calendar, right? We're coming to the end of October. We have the Christmas and the holiday season upon us. This is a happy time. It's a time when businesses out there do 40 percent of their yearly sales...

SIMONETTI: When you hear this program, when you hear everything going on in Washington, if you're a business or a regular person, are you going to spend money? No. This is going to hurt everybody!

GOOLSBEE: I have one question.

HANNITY: And I have a question for you about the debt ceiling. We're going to get all of you guys in, I promise. We got a lot of people to talk tonight and a lot of time.