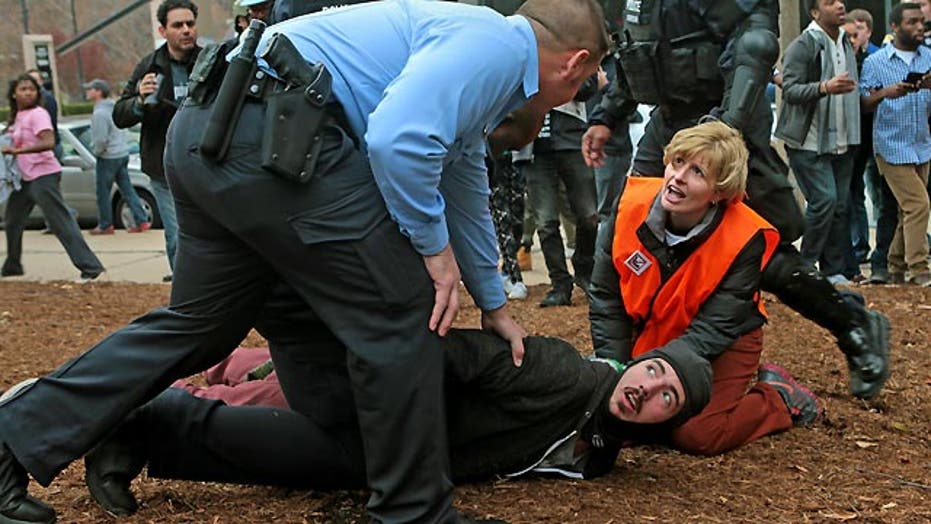 Is America an unjust nation?

O'REILLY: Back of the Book segment tonight, as mentioned in the Talking Points Memo, millions of Americans are buying into the theory that America is an unjust nation. That is the primary theme of the protest marches over the deaths of Michael Brown and Eric Garner. It's also the theme of Senator Feinstein's torture report issued by the democrats on the intelligence committee. Throw in a little income inequality here, a little Wall Street has rigged the game there, and you have an oppressive country, do you not?

Joining us now from Washington Charles Krauthammer, author of the mega bestseller "Things that Matter." Excellent Christmas and Hanukkah gift. So, this unjust country theory seems to be taking root, Charles. Why?

CHARLES KRAUTHAMMER, FOX NEWS CONTRIBUTOR: Well, let me just start by saying that I thought I heard you say earlier that you don't speak for the baby Jesus. Which is a remarkable act of humility on your part. So I commend you. And I attribute it to the Christmas spirit. Now, in that spirit on the question of justice, if our standard is divine justice, we are indeed unjust. If our standard is human justice, we are probably one of the most just countries on earth. And one of the reasons, for example, for this wave of revulsion and these demonstrations, and people saying all these nasty things about America, our a couple of instances where because of our judicial system, which tries to protect people, to protect defendants, to protect the accused, we he end up with a system of grand juries which you don't have in much of the world. And, of course, being human, will sometimes we'll come to the wrong conclusion. I think it came to the right conclusion in Ferguson. The wrong conclusion obviously wrong conclusion in Staten Island. And that's what sparked the demonstrations. But the irony is it's because we try to go the extra mile to prevent arbitrary arrests and railroading suspects.

O'REILLY: Okay. But it's a deeper situation for many Americans as I talked about in the Talking Points Memo with Senator Warren being the new face of liberalism. It's income inequality. It's racism, it's white privilege. It's one grievance after another. And millions of Americans are buying into this. I don't know whether you saw us last night. But we used a clip of Samuel L. Jackson, multimillionaire actor, who has made his fortune in America, talented man. Going out and basically saying that this is corrupt, the police are racist, the whole country's unfair. How do they get there?

KRAUTHAMMER: There is nothing new here, Bill. I mean, the phrase that's actually so old it's not obsolete is limousine liberal. So, this goes back decades, generations. America has always had a left. We never had a socialist party because socialism is so obviously absurd as a system of government and Americans have too much common sense, but we've always had a left and it's always had a grievance, and it will create a grievance here, another one has become obsolete.

O'REILLY: We did have a socialist party under Eugene Debs --

KRAUTHAMMER: Look, half of Hollywood thinks that. The theme of every other Hollywood movie is the evil of businessmen. When I grew up, there was "The Fugitive." Remember the television series.

KRAUTHAMMER: And the guy who did it was a one-armed man. So, 10 years ago, 15 years ago, they make a movie out of it. And it turns out the one-armed man was actually an agent of an evil drug company covering up a drug that's killing people. And I thought this is the perfect emblem of how Hollywood always has to find the villain, the villain always is business and now Elizabeth Warren, the villain is business Wall Street. This isn't new. We've always had this sort of anti-capitalist. And the irony is of course, it is those who do so well under capitalism who for whatever reason, lack of intelligence, guilt, why did I succeed and not others, do I really deserve this. Or, you know, simply political derangement of some sort who want to locate the root of that in what is otherwise known as the free enterprise system that people leave their countries for sometimes on rafts so --

O'REILLY: They want to be a part of it, right, absolutely.

KRAUTHAMMER: So they come onshore in Florida and become part of a free country.

O'REILLY: Right. I only have a minute left but I do want to throw this in because this is interesting in the light of the torture memo and Feinstein democrats saying, look, we're a bad country because we torture people. The Taliban massacre 130 people in Pakistan. Most of them children. It's Pakistan's fault. If Pakistan had joined with the U.S. to fight the Taliban it would have been defeated a long time ago. But Pakistan tried to buy a deal with the devil and now Pakistan's paying the price. Isn't it ironic in the week that in the week when we're discussing 26 individuals who may have been abused by the CIA in the wake of 9/11, we now flash over to 130 people, most of them children, Muslim children gunned down by these savages, isn't that ironic?

KRAUTHAMMER: And what it does is it reminds us of the face of evil that we saw on 9/11 and we now have sort of put aside. Let me pose a hypothetical.

KRAUTHAMMER: Imagine we captured one of these guys an hour before the attack, but the other guys on their way?

KRAUTHAMMER: And you knew that he was going to attack this school, would you hold back any method of interrogation in order to find out and to stop it? I don't think anybody would say no.

O'REILLY: Right. But it's Pakistan's own fault. Charles, as always, thank you.