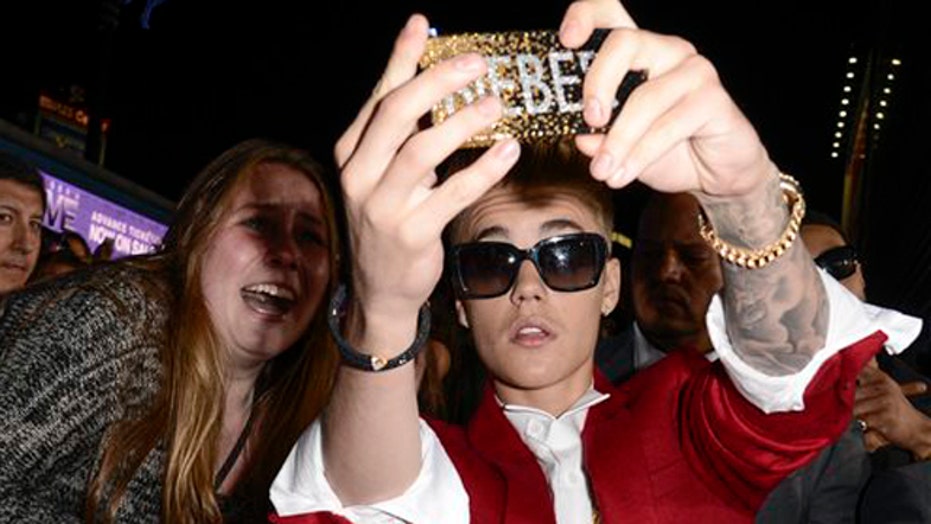 Is a culture of teens gone wild to be expected?

This is a rush transcript from "Hannity," January 24, 2014. This copy may not be in its final form and may be updated.

SEAN HANNITY, HOST: We begin tonight as more details about Justin Bieber's arrest in Florida are now starting to trickle out. According to People magazine, the pop star, quote, "cried his little eyes out" after a judge set his bond at $2,500 yesterday.

But it appeared it didn't have much of an effect on him. The Daily Mail online is reporting that Justin was pictured partying with his father in Miami following his release, even though his manager and his team had a private jet standing by for him all day. They reportedly wanted to get him out of Florida so they could have a heart to heart with him.

And tonight, we want to hear from you, as always. Log onto our Facebook page. Share your thoughts with us. And don't forget, it's time to Trend at 10. Sound off on Twitter, hashtag #hannity, my address @seanhannity.

And we welcome our Friday studio audience. How's everybody?

All right, culture, teens gone wild -- to be expected? Deneen?

HANNITY: Don't we see this with all those celebrities? Think about this. Remember...

ALISON HOWARD, CONCERNED WOMEN FOR AMERICA: The most important thing I think to know is Justin Bieber's mom chose life. You know, she was pregnant at 17, raised him as a single mom, and now Justin is turning around and saying that his mom gave him these prescription drugs, when he was pulled over for his DUI. And it's, like, I hope Justin chooses life. This is the path to death, and he's so young. And he's such a role model. He was caught in Brazil at a brothel. It's, like, is this what we're setting up as the epitome of success?

AMY HOLMES, THEBLAZE: There is, but you're looking at this young man, so much, too much, too soon, I think we could say. But also, let's remember this is the young man who wrote in the Anne Frank Museum guest log, "She would have been a Belieber." This is not someone who is a deeply thoughtful individual.

HANNITY: All right, let's go to the tape here. We've got some of Bieber's craziest moments we'll add to the discussion. Let's roll tape.

JUSTIN BIEBER, SINGER: We swagger, man. You know, this is just a little walk to piss. That's the coolest spot to piss. You know, you'll forever remember that. You're not going to remember him pissing in the restroom. Like, everybody does that.

HANNITY: Dr. Loudon, I'm looking at this -- all these -- I don't think fame is healthy. Now, I say that as somebody that's on TV and radio, OK?

GINA LOUDON, RADIO HOST: No, but you make a great point. There's takeaway here that's really important. Takeaway for teenagers is, hey, if these are the values you espouse, you aspire to the fame and the fortune, it's not a lot happier there than maybe where you are. And so maybe it will cause teens to pause and evaluate what's really important.

But also, Sean, for people who are in the limelight, like everyone here, it's time to look at this and say this guy surrounded himself with yes men...

HANNITY: I think the person that handles fame the best in the crowd is Tamara. I think...

TAMARA HOLDER, FOX CONTRIBUTOR: Yes, because I have so many people and paparazzi just coming up to me and wanting my autograph.

HANNITY: I saw that before I came in!

HOLDER: Fox News viewers, they just -- they really like me.

But Sean, I find this really weird because there's a problem with authority here. Where's the discussion about the kid smuggling a monkey into another country, renting a Lamborghini, driving through the streets? Forget the drug conversation. But he seems to just totally dismisses authority and the laws and the rules of the land.

UNIDENTIFIED FEMALE: Well, his father's drinking with him!

UNIDENTIFIED FEMALE: His father's allowing him to drink alcohol, and then if he drives and kills someone while he's drunk, is he going to say, he suffers from affluenza and get 10 years probation?

HANNITY: All right, but wait.

But, now, we put these guys on pedestals. You can go back to Elvis Presley and Janis Joplin and Anna Nicole Smith and Whitney Houston, all these celebrities -- Michael Jackson -- anybody more messed up than Michael Jackson? Right?

Let's look at some of these other celebrities just absolutely losing it. Is it because of fame? Watch this.

DENNIS RODMAN, FORMER NBA PLAYER: I don't give a rat's (EXPLETIVE DELETED) the hell you think. I'm saying to you look at these guys there. Look at them!

LINDSAY LOHAN, ACTRESS: It wasn't a vacation. It wasn't some sort of a joke. And I respect (INAUDIBLE) taking it seriously.

ALEC BALDWIN, ACTOR, 2007: You better be ready, Friday, the 20th, to meet with me because I'm going to let you know just how I feel about what a rude little pig you really are!

CHARLIE SHEEN, ACTOR: You judged me, condemned me, discarded me. Not anymore. Winning!

KAYNE WEST, RAPPER: Yo, Taylor, I'm really happy for you, I'm going to let you finish. But Beyonce had one of the best videos of all time!

DAVID HASSELHOFF, ACTOR: This and this.

DAVID AVELLA, GOPAC PRESIDENT: Sean, what we don't know and we need the answer to is, was Justin Bieber one of those few young people who signed up for his ObamaCare so he can get the health care help he needs in this time? And will he get to see the doctor he wants to choose?

HANNITY: That's true. Todd Starnes, I see you -- you like to write about cultural issues, the decline of American culture, right?

TODD STARNES, FOX NEWS RADIO: Yes, American culture. And I'm wondering exactly if this is a great time for us to have a debate on immigration policies. I mean, what does a guy have to do to get deported from this country?

But also, the family issue here, Sean. We've got an absentee dad who now is a part of the picture. He was allegedly there. And then we have the mom, who was apparently or allegedly giving the kid these drugs. This is like a Jerry Springer family waiting to happen.

AMBER BARNO, CONCERNED VETERANS FOR AMERICA: What this comes down to is when these young kids have that much fame, they get detached from reality, is what it is. So when they have the spotlight, the money, and then you start mixing in the drugs and the alcohol and parents who are...

HANNITY: You can go back to "The Partridge Family." Remember Danny Bonaduce, right? OK? Go ahead.

ELLISON BARBER, WASHINGTON FREE BEACON: I have to comment on the riveting (ph) fact that he's Canadian because if you looked at his arrest report, the person who's -- the people who are having the last laugh at this are actually the Canadians because while we've been focusing on Rob Ford, they have successfully shoved Bieber across the border, because he's an American citizen. His nationality is United States. So he's -- we're stuck with him.

HANNITY: With Bieber or Ford?

BARBER: His nationality is United States. He's in here.

HANNITY: Now, you're a teacher. Do you see a lot of this in school?

ZAINO: Well, my students are not at all interested in Justin Bieber. And having never heard a song, and I couldn't tell you...

HANNITY: I'm sure none of your students drink, none of them have done drugs.

ZAINO: Oh, of course not. No. But let me just say, there is a petition to get him deported, which would be very hard for one DUI. But he is here on a special visa for people who excel and give something exceptional to the United States. Who made the decision that he gives something exceptional to the United States? It's (INAUDIBLE) the special visa --

HANNITY: Let me go to Noah. Noah works at Mediaite.com. They -- they like media fights. If I say something about MSNBC right now, probably lead your website, right?

NOAH ROTHMAN, MEDIAITE: You should say something about MSNBC right now!

HANNITY: They're an extension of the Obama White House press office!

ROTHMAN: Well, one of the things that...

UNIDENTIFIED MALE: They are.

ROTHMAN: One of the things that this conversation has generally centered on is how kind of reprehensible this is. Nobody's glamorizing this behavior. Nobody's saying that this is behavior to aspire to or this is somebody excelling. Every time something like this happens, we say, "Oh, gosh, you know, society's coming apart, falling apart." But it doesn't look that way because people don't see this as behavior to emulate.

HANNITY: Let me ask Kerry because she's in the media, too. The media buildeth up and they love tearing somebody down, big-time, right?

KERRY PICKET, BREIBART NEWS: Yes, absolutely, but you know what, Sean? Remember, I mean, you mentioned how -- well, this is what fame does to people. But you know, there's also has been good cases, too, of people who are -- like Ron Howard, for example...

HANNITY: That's one of the -- isn't that the exception?

PICKET: No, but you see, there have been other exceptions, as well, but I think, you know, there are people who are also not famous who have also had messed-up lives, as well.

So I mean, I think this has to do with what happens when people end up becoming extraordinarily successful and then how they end up handling themselves. They're people -- whether they're famous or not.

HANNITY: Stefano, take us out.

JENNIFER STEFANO, AMERICANS FOR PROSPERITY: You know, I have to stand in solidarity with my sister, Tamara, because I agree with her. Where the hell...

STEFANO: I mean, this is -- solidarity, sister. Number one, where the hell are the authorities that are allowing this kid to get away with it? And number two, this just proves the fact that Hillary Clinton's ridiculous "It Takes a Village" is total BS! You need parents! It's not fame that did this. It is you don't have a mother and a father kicking your A-double-scribble!

HANNITY: I would agree with that. A-double...