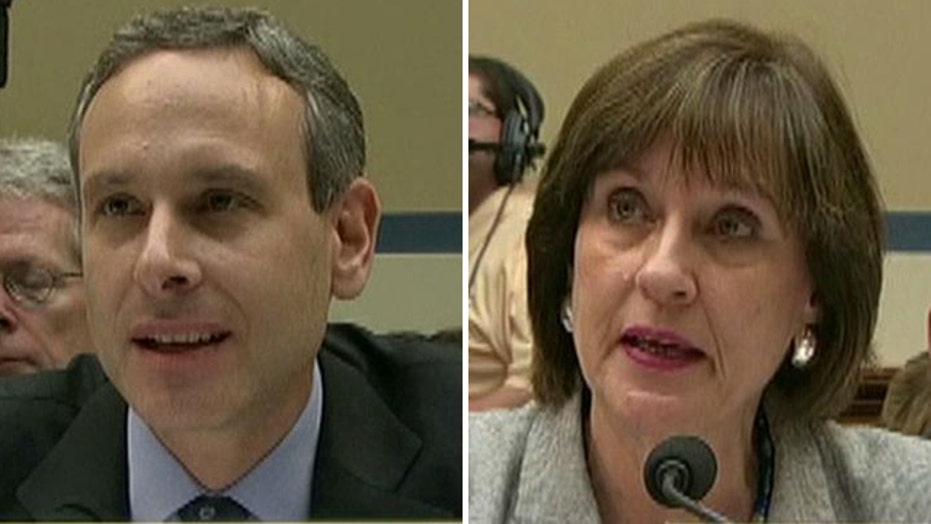 This is a rush transcript from "Journal Editorial Report," May 25, 2013. This copy may not be in its final form and may be updated.

Well, another week, but not many answers from the IRS or the Obamaadministration about the targeting of conservative groups during the 2012election campaign. You just heard former IRS commissioner, DouglasSchulman, tell Congress he wasn't responsible and doesn't know who is. Agency official, Lois Lerner, now on administrative leave, invoked her Fifth Amendment right to remain silent, but not before declaring her own innocence. And the administration's story about who knew it and when they knew it continued to evolve.

So, Collin, what did we learn this week, the most important things we learned this week that were new about this scandal?

COLLIN LEVY, THE WALL STREET JOURNAL: Right. We certainly saw alot of cute answers in those congressional hearings, right? I think those raised as many questions as they answered.

But I think the big things we had confirmed this week are we now know the commissioner, Doug Shulman, knew about this for sure in the spring time of 2012. That was about the same time he was telling Congress that there had been absolutely no targeting. We also know that Lois Lerner knew about this in June of 2011. I think that's pretty clear.

You know, the other thing that happened importantly was we learned a little bit about the process that was going on in Cincinnati and the firestorm that was happening there because, the way that their process works, it's now clear there had to be a little bit broader coordination than has previously been acknowledged.

GIGOT: Collin, do you mean coordination in the Cincinnati office or coordination with the Treasury Department in Washington?

LEVY: Well, we know for sure that it had to have gone up the chain within the Cincinnati office, but there are also reports, you know, individual reports, that some of this was getting bounced back to Washington, you know, for a secondary review.

GIGOT: Kim, what about the White House response to this? Their basic point is, look, we didn't want to interfere with an investigation so we took complete hands off, nobody told the president, the president didn't need to know. Does that pass the credibility test?

KIM STRASSEL, WASHINGTON COLUMNIST: No. You know, this week was all about the White House's shifting story, who knew what and when. But increasingly, the press and Congress is starting to say, what really matters is not what you knew over the last two months, it's what you knew and what you didn't do over the past two years.

And the reality is you've got a president and a campaign team that themselves, back in 2008, were often, as a campaign, were targeting conservatives. The idea that there was just no knowledge or understanding about what could be happening in the IRS, given all of these reports that were bubbling up and the fact that Congress was looking into it, seems harder and harder to believe. And it's also somewhat hard to understand the White House's very strange proposition that they could not get involved in this in any way because the Inspector General was looking at it. This certainly has not been the standard, you know, for other presidents and other issues in the past.

GIGOT: Well, you know, I sympathize with the White House here in a sense, Dan, on the simple point that you don't want to interfere with an investigation like this, but that doesn't mean you can't manage the department.

GIGOT: And that means you couldn't have done something back in 2011, 2012, to define what is a tax-exempt organization, to issue instructions to the IRS to say don't do this, and to bring it up the chain of command so

you don't have a few people in Cincinnati ultimately responsible for harassing what could be turned out to be hundreds of groups. That's thePresident's and the treasury secretary's responsibility.

HENNINGER: Well, as we know, Paul, none of the things you described happened.

HENNINGER: They didn't do any of that.

HENNINGER: Instead, the idea that because this investigation -- it was actually an audit.

HENNINGER: The Inspector General doesn't have subpoena power. None of these people are under legal pressure. They weren't hiring lawyers.

So they gradually find out it's going on during the campaign, but by doing nothing, they let it rip. They let the audit, the bureau, hold on to these applications from these groups, asked them for all of this information, basically put all these political activist groups who simply wanted to participate, put them on the shelf. Some of them quit. So that was the -- that was the practical political effect of saying, we don't want to get involved. Well, that doesn't mean nothing was happening. It means

the conservative groups were on the shelf.

GIGOT: How do we contain --

LEVY: Right. Yeah. If I could just elaborate on Dan's point, too.

LEVY: I think one thing that's really important for people to understand here, it wasn't just the groups that had their applications on the shelf that were affected by this. The fact that no one spoke up about this, there were hundreds of other conservative groups that we're hearing

from their lawyers that this was happening, conservative groups were getting targeted. This was all over the news. That had the affect of chilling the conduct of groups whose applications weren't even affected.

Kim, there are some calls now, including in Congress and the media, for a special prosecutor to get into --

-- to look into this. Do you agree with that, or think this could be handled the way it's currently being handled by the Justice Department on the criminal side, but more important on Congress on the public side?

STRASSEL: Yeah. It's a terrible idea to bring in a special prosecutor because what happens at this point is this whole thing gets moved off to the side where it's going to go away for two years or however many years as this special prosecutor looks into it.

The merit of a congressional investigation, which by the way would stop if there was a special prosecutor, is this can continue to unroll as they get more information.

The other thing that's important about this, Paul, is we saw a number of lawsuits by some of these groups get either filed this week or threatened to be filed. And the importance of that is that they are themselves starting a legal proceeding in which there will be depositions, where there will be documents that have to be turned over, and that's an investigation that can proceed as well. So there's plenty of opportunity to get to the bottom of this between the Department of Justice and Congress and the legal system.

GIGOT: Yeah. I agree with you, Kim. This is as much about public education and accountability as it is about prosecutions. Maybe the former is more important.