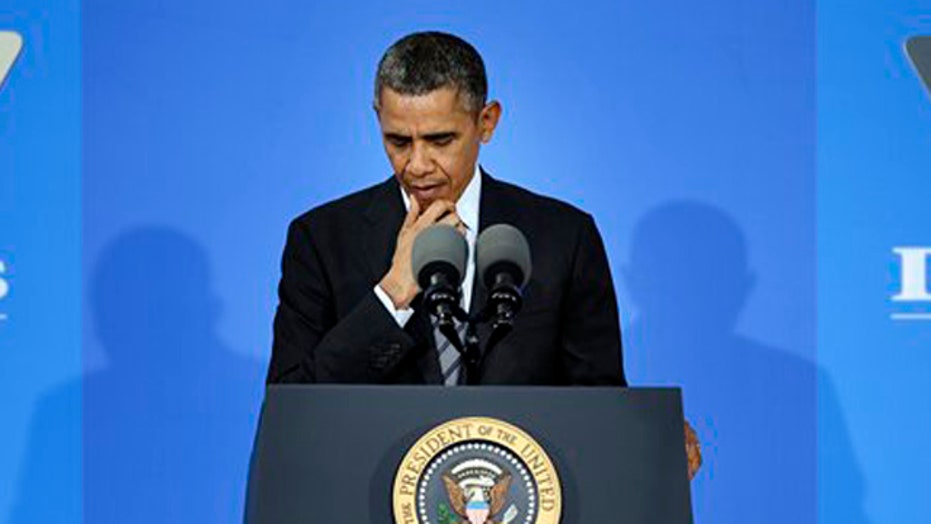 Brigitte Gabriel, Michael Ghouse debate the threat of the agreement

This is a rush transcript from "Hannity," November 26, 2013. This copy may not be in its final form and may be updated.

SEAN HANNITY, HOST: And welcome back to "Hannity." President Obama's willingness to sit down and negotiate with the terrorists in Tehran proves once again his weakness on the world stage and his failure to understand the threat that is posed to America by radical Islam. Now, sadly, we shouldn't be surprised because back in 2008, then candidate Obama -- remember? He said this.

SEN. BARACK OBAMA, D-ILL., PRESIDENTIAL CANDIDATE: But I reserve the right as president of the United States to meet with anybody at a time and place of my choosing if I think it's going to keep America safe.

HANNITY: And since taking office, his foreign policy blunders have been on full display, from the gifting of U.S. military F-16s and Abrams tanks to former president Mohammed Morsi in the radical Muslim Brotherhood in Egypt to his failure to act on his words in the so-called red line regarding Syria after its government used chemical weapons against its own people.

Now, it's clear the President does not have a clue and that he is more than comfortable from, quote, "leading from behind."

Here with reaction, Act for America president Brigitte Gabriel, and from the America Together Foundation, Mike Ghouse is with us. Welcome both of you. Mike...

HANNITY: Is Iran a state that has killed Americans in Iraq and Afghanistan? Are they fighting proxy wars? Are they fomenting terrorism around the world? Simple question. Is that regime doing all of that?

HANNITY: I didn't ask you about 1979. Right now, did they not kill Americans in Iraq and Afghanistan? Let's go through it one by one. Did they, yes or no?

GHOUSE: ... a prelude to that. I want to give you (INAUDIBLE)

HANNITY: Are they fighting a proxy war through Hezbollah and different radical groups in the Middle East? The answer is yes.

GHOUSE: They're not fighting with us.

HANNITY: No, I didn't ask you if they're fighting -- I said, are they fighting proxy wars, and are they a terrorist state? And the answer is yes. They are spreading terror.

GHOUSE: I wouldn't call it terrorism. What they're doing is terror, but I would not qualify them as a terrorist state, Sean.

HANNITY: Wait a minute! What they're doing is terror but it's not -- it's not a terrorist state? How can you say that?

GHOUSE: It is -- they're not committed to do terrorism. Once justice is done, whenever that is, the conflicts are, they're going to back out, like they're doing peace with Israel with the nuclear treaty now. This is the right thing to do. I'm glad Rouhani is helping their people put food on the table...

HANNITY: The day -- wait a minute! The week before this agreement, he was talking again about wiping Israel off the map and destroying the Zionist state, one week before the announcement was announced!

HANNITY: Yes, he did!

GHOUSE: Those words were mistranslated. No, sir, he said...

HANNITY: I have them right here.

HANNITY: All right, let me read to you what he said. He -- quote -- on the Wednesday before the Saturday announcement, Brigitte, he said that the Zionists are rabid dogs, they can't be called human beings and vowed that their state will soon disappear.

I don't know what Mike was saying about interpretation, but he said it many times.

GHOUSE: They are against Zionism, but not against Israel!

And look, Sean, just two weeks ago, they had the largest demonstration ever on the streets of Iran calling "Death to America, death to Israel." This is at the same time while we are negotiating with these people!

The only time in the Islamic world you come to the negotiating table is to negotiate the terms of your surrender! Right now, President Obama has delivered America to Iran as weak, as unable to fight, as unable to win the war, and that is now empowering our enemies to the point where Hezbollah hold their Facebooks and in the articles in Beirut today, coming out and already calling Iran the Islamic nuclear republic of Iran!

GHOUSE: I am with President Reagan's statement, trust but verify. Without verifying...

GHOUSE: Sean, right now, they agreed to freeze the development for the next six months. In the six months, we are going to develop a full-blown policy. This is a good step for Israel. Israel for the first time in history...

HANNITY: Mike, it does not open...

GHOUSE: ... have come to the doors of the security. If you can control on this, if you can have a hold on this, if Iran can develop only for peaceful...

HANNITY: All right, Brigitte, I'll let you handle this.

GABRIEL: Iran lied to the world for years! Iran has been lying to the world about their nuclear plans since 2003! This is nothing new! They have been deceiving the world! This is part of their tactics! And this is something we need to be aware of!

We have to remember that with Iran, we are dealing with a mullahcracy - an Islamic mullahcracy that based their -- everything they do on their religious philosophy!

And right now, they are basing this whole deception of the West on the treaty of al Habibi (ph), which is an Islamic principle of war! It's a strategic way to defeat your -- to defeat your enemy that was exercised by Prophet Mohammed in 628! And this is exactly what the Iranians are doing! They are basing their lies and deception to defeat the West, basically buying time in order to finish their nuclear development plan!

HANNITY: Mike, you have to wake up. Mike, you didn't get it about the Muslim Brotherhood. You don't get it here. These are radical Islamists. They want a worldwide Islamic caliphate and they're willing to

kill to get it. And I don't know what part of that you're not understanding because that's the reality of what this regime is about.

GHOUSE: Sean, I told you Brotherhood would not be in power. They are not. I was damn right about it.

HANNITY: No. You were wrong. They got in power.

HANNITY: You said they wouldn't be in power.

GHOUSE: They would get in power but the people --

HANNITY: You didn't say that.

GHOUSE: I did say that. Pull it back. The people who fought for this freedom are going to get right back --

HANNITY: All right. We have to go.

GHOUSE: And there is not going to be caliphate ever at all. I have told you that.

HANNITY: Mark my words, this is his Munich moment. This is it right here. And we will, as my mother used to say, rue the day. Guys, good to see you both.