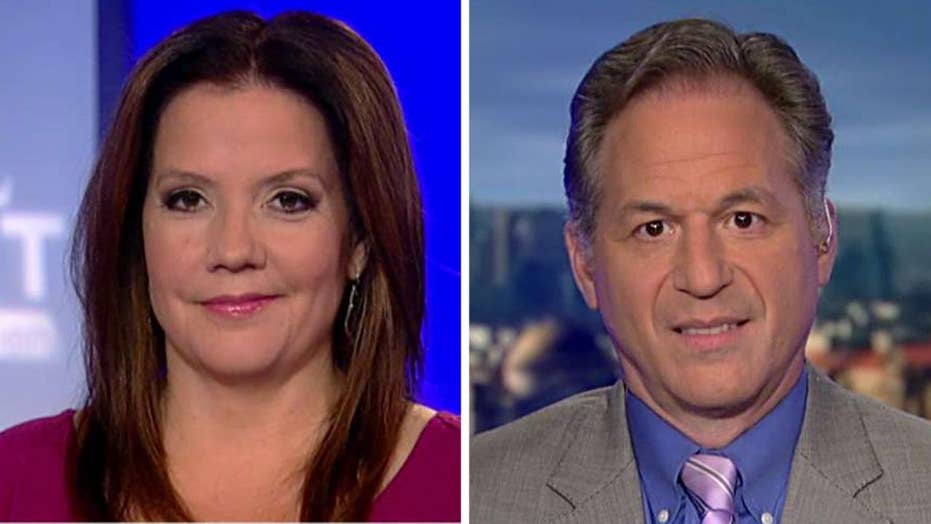 Inside the politics of President Trump's revised travel ban

This is a rush transcript from "Special Report with Bret Baier," September 25, 2017. This copy may not be in its final form and may be updated.

VICE PRESIDENT MIKE PENCE: We've implemented at the president's direction from the first of the year, the extreme vetting measures that had been designed to make sure that people coming into this country don't represent a threat to this country. We have to continue and we will continue to make sure that anyone coming into the United States of America does not represent a threat to our communities and our families.

PRESIDENT DONALD TRUMP: The travel ban -- the tougher, the better.

BRET BAIER, ANCHOR: Well, that travel ban now in effect for more countries as you look at the map -- Chad, Iran, Libya, North Korea, Venezuela, Somalia, Syria, Yemen. This expands the existing executive order as it continues to go through the court process. We're back with our panel. Michael?

MICHAEL CROWLEY, POLITICO: Well, you know, third bite at the apple. In some ways it looks like they are making progress. A lot of legal experts are saying that they are doing a better job of explaining it. The sheer passage of time allows the administration to say that it's been looking at these countries and their internal vetting procedures. They're putting it through more vigorous review.

At the same time the critics are not backing down an inch. The ACLU is calling this Muslim ban 3.0. And I think Trump will have this lingering problem campaign which is his rhetoric when he did call for a total shutdown of all Muslims entering the country I think he said. That's going to be used in court briefs against him at infinitum by people saying that this is just backdoor way to implement a ban like this. One quick final point --

BAIER: Sure, but Venezuela and North Korea present a problem for that argument.

CROWLEY: They do, but they feel like a fig leaf. Virtually no North Koreans come to this country and the Venezuela factor is just a few government officials. It's really a pretty minor part of this.

Last quick point. I remain surprised pleasantly that we have not had a major domestic terrorist attack since President Trump took office. I think people were concerned there were going to be a lot of those and they would immediately trigger drastic action on this front. So the whole debate around the ban fortunately does not come into context like that which could unfortunately come any day now.

BAIER: And they make clear, Mollie, that this is about these countries and if you get to the safe visa process in those countries, then you can get off this list.

MOLLIE HEMMINGWAY, THE FEDERALIST: Right. The very first travel ban was done in really poor fashion. It was arbitrary and capricious. It wasn't well thought out. This one actually seems very well thought out. They have standards that you can meet to get off the list. And not just that there are countries that are on this list that are not Muslim majority. There are a lot of Muslim majority countries that are not on the list. So I think the argument that this is just a Muslim ban doesn't hold up contra what he promised he would do during the debate.

There is still the question about whether this will actually do anything to accomplish what it intends to do which is keep the country safe. There has been such influx of immigrants into Europe over the last few decades, and those people can be radicalized in Europe and come over here very easily. So there is a question about how effective it will be in the long run anyway.

CHARLES LANE, THE WASHINGTON POST: I thought ever since the Supreme Court sort of halfway signed off on the plan and at least let it take effect partially that he was heading toward at least some kind of partial victory at the Supreme Court. And now with this version 3.0, I think his chances are improved. In fact the Supreme Court has now called off the hearing it was going to have October 10th.

LANE: Yes, and called for briefing to see whether this whole issue has now been mooted and so on and so forth.

I think the big picture here is that he has climbed a long way down from where he was in January. And the issue as such has fizzled and lost a lot of its heat as a political matter. It's now going to be tied up in trench warfare in the courts. And from that point of view I think his chances have improved.

CROWLEY: I agree. God forbid one more domestic attack this goes top of the list in terms of our national conversation once again. So knock on wood that we remain lucky.

BAIER: Or good, or both.