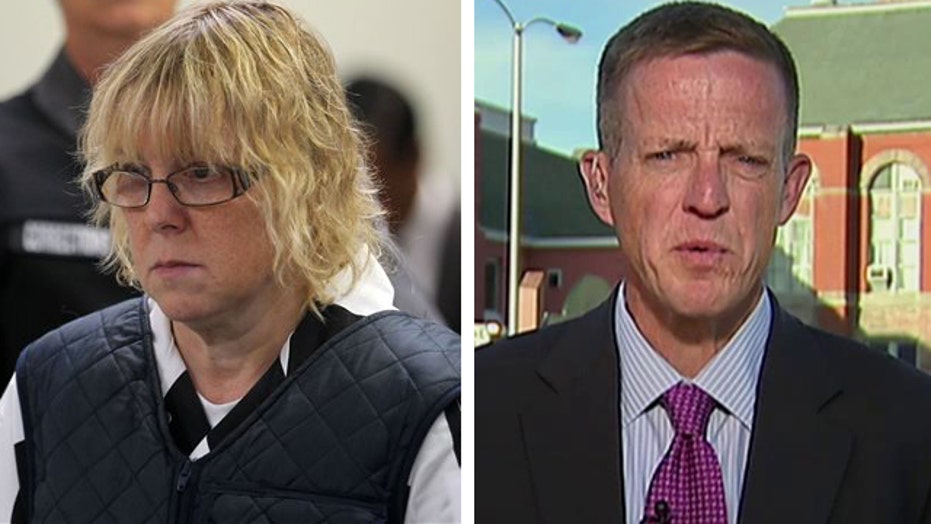 Inside the alleged murder-for-hire plot in NY prison break

Did Joyce Mitchell agree to help two murderers escape from prison in exchange for the murder of her husband?

This is a rush transcript from "On the Record," June 17, 2015. This copy may not be in its final form and may be updated.

GRETA VAN SUSTEREN, FOX NEWS HOST: Stunning new allegations that Joyce Mitchell was part of a murder-for-hire plot to kill her own husband. She is already charged with helping the two killers escape by providing hack saw blades, chisels and other tools. Tonight, there is more information on her role in the prison break.

Clinton County district attorney, Andrew Wylie, is the prosecutor on the case. He joins us.

So, tell me, sir, I take it, now that she has counsel, she is not talking anymore to you, right?

WYLIE: Actually, on Saturday evening, she requested to come back up to Plattsburg with an attorney present, and she spent a couple hours with us at the police station. So we did speak to her at that point in time. But since Saturday, we have had no contact with her.

VAN SUSTEREN: Does she have to provide any information at all that might lead to you these two? What they may have had in mind of where they would go?

WYLIE: Not at all. Only the seven hour radius and in no direction or location did she provide us at any time during her interviews with the New York State Police.

VAN SUSTEREN: OK. Why did she get cold feet and suddenly not show up at the manhole cover?

WYLIE: Well, what she tells us is she loved her husband, Lyle. She didn't want to leave Lyle in the end, and she was probably afraid of the circumstances that she could have faced had she left the area with these two men.

VAN SUSTEREN: Probably would have been a good idea if she had notified the authorities before they escaped if she had that sort of sense that she loved her husband.

WYLIE: It would have been a great idea. And I don't think we would be standing here right now. We would be having two individuals, in all likelihood, in custody and dealing with them through the legal system.

VAN SUSTEREN: Sir, this plot to kill her husband, was she part of it? I mean, what was she supposed to do?

WYLIE: Well, there was a -- she had told us what the circumstances were that she was to drive both Matt and Sweat back to her house, at which time, they would harm her husband or kill him in whatever manner they were going to. She did not tell us what the manner of the homicide would have been.

VAN SUSTEREN: What was the point of killing the husband? Why not just drive off into the sunset and make your escape?

WYLIE: Well, that's what I have been talking about. We don't understand why they would have gone back to the house. So that's an issue with her statements to us that we're still questioning.

VAN SUSTEREN: Does she profess any love for either one of them? Because, you know, I have been out, in and out of these prisons, and these stories of women falling in love in prison, they are so peculiar, even long after they are still professing love. Does she say that she loves either one of these two men?

WYLIE: She never used that wording to us. It is hard to believe that these circumstances occur. But it obviously occurred to the extent that she was willing to assist these two men to escape from Clinton Correctional Facility.

VAN SUSTEREN: We saw video of her husband visiting her yesterday. And I have to tell you that my husband would not be visiting me under the similar circumstances. Why did -- do you know why he went to see her?

WYLIE: Hopefully, I will have that answer.

VAN SUSTEREN: Is it a monitored interview so that someone is there with them or you have recordings of that interview?

WYLIE: Well, he showed up at the police barracks in Malone today and entered by members of the New York State Police. As far as his contact with Joyce Mitchell over the weekend, it was in an area of the jail where they were able to have contact with each other, but we did not videotape it. The room is videotaped but we did not specifically videotape their conversation and we certainly were not able to listen to it.

VAN SUSTEREN: What's the demeanor of his prior to going into the jail, after meeting with her and coming out?

WYLIE: I have not been able to talk to him and I did not actually see the video. I only sought photographs of him coming out of the jail today. And from that I really couldn't tell his demeanor.

VAN SUSTEREN: Did she have to consent to the visit?

VAN SUSTEREN: You have actually sat down and talked with her or is this the police doing the interviewing?

WYLIE: Just the police are doing the interviews.

VAN SUSTEREN: So you have never had a conversation with her?

WYLIE: Absolutely not. I have been --

WYLIE: I was just going to say I have been in the police station. I was there Saturday night when she was being interviewed. I was able to monitor the interview, but I did you not actually speak with her.

VAN SUSTEREN: When did the -- go ahead.

WYLIE: It was just really hard to get a true feeling as to whether she was totally being fully honest with us.

VAN SUSTEREN: When did this crime start? When did she get involved in it?

WYLIE: It was about five weeks prior to the escape, per her statements, is when they started asking her to bring in the hack saw blades. That's the time frame that we have, only based on her statements to us.

VAN SUSTEREN: And she didn't say what possessed her to do that? I mean, why in the world? I mean, five weeks is a long time to think between the time you start a plot and the time you don't show up at manhole cover. There's lots of time to dump out and call the police. She had no reason or, I mean, why didn't she?

WYLIE: I haven't talked to her, Greta. I would like to have that conversation with her. And until that time, I just can't answer that question.

VAN SUSTEREN: Let me ask you some questions about the manhunt. I know they are following up every single tip. Is there anything at all? Like there is no stolen vehicle, no indication money has been stolen from anybody. Does Joyce Mitchell have any idea how they are feeding themselves or how they are getting around? Does she give you anything at all?

WYLIE: Not at all. From out interview of her, everything was pre escape. Our understanding, she hasn't had any contact whatsoever with the two. And she has absolutely no idea, from what she tells us, where they are located.

VAN SUSTEREN: Do they have any access is at all, as far as you know, to any money?

WYLIE: Not that I'm aware of. They may have had money in the jail, but I have absolutely no information to support whether they did or not.

VAN SUSTEREN: Was she worried the inmates would kill her after killing her husband?

VAN SUSTEREN: One last question. What time was she due at that manhole cover? Because that would give us an idea of when the escape really happened.

WYLIE: The time frame is supposed to be approximately midnight.

VAN SUSTEREN: And she didn't show up.

Anyway, Andrew, thank you very much. And I hope you will come back and join us. I fear this is going to be a long manhunt and a long prosecution.

WYLIE: Thank you, Greta. I appreciate it.