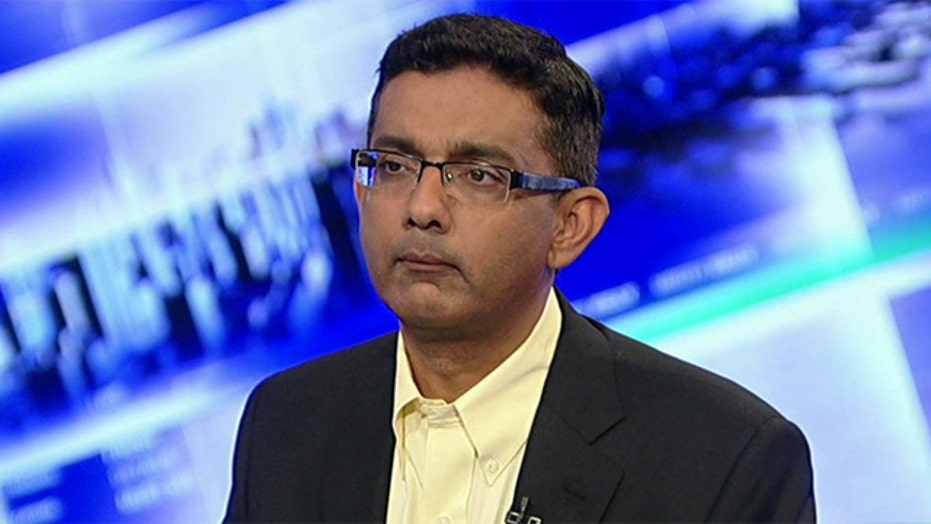 What the world would've been like without the U.S.

This is a rush transcript from "The Kelly File," July 3, 2014. This copy may not be in its final form and may be updated.

MEGYN KELLY, HOST: Abraham Lincoln plays a big role in this telling of the story of "America." And this film serves as a follow-up to Dinesh D'Souza's project "2016: Obama's America." That film became the second most popular political documentary in history. When D'Souza set out to make this movie, he set his goal was to challenge the quote "leftist progressive critique" of America.

Joining me now, Dinesh D'Souza. Dinesh, congratulations on the film.

KELLY: Why was it important for you to make this? You grew up in India.

D'SOUZA: I grew up in a different world, actually a world without America, and although I grew up in a middle-class family in India, I grew up without a phone, without television, without hot water, we had a car but if you looked down the floor of our car, you could see the ground.

So, when came to America I was stunned by the abundance of ordinary life. The rich guys lived well everywhere. But I was struck of how good the ordinary fellow has it in America. And then I was also struck by the goodness and idealism of the American people. Even when they fell short they always wanted to do better.

And then I saw this sort of ferocious leftist critique of America. And I'm like -- I might have expected to come from a Venezuelan despot Iranian Mullah or some soviet apparatchik, but no, it's coming from some of our most intelligent people in America on the American campus. And then over the years I see this critique metastasize out of the campus, into Hollywood, into the media and then I think into the corridors of the government. So, we're seeing what we call it the shaming of America, and attack on America. It's completely wrong-headed. And what we do in this film is we give plenty of space to the attack. You can hear it.

D'SOUZA: In all its ferocity --

KELLY: Unlike Michael Moore, you actually let the other side have it say and people got to hear both arguments.

D'SOUZA: We've done screenings where one woman, "I'm shaking with rage," and she almost walked out because she thought it was Michael Moore film. But of course after laying out the critique, we turn around and systematically decimate it, we rebutted point by point, so we want to equip Americans with a deeper understanding of why this country has meant so much to the world.

KELLY: Uh-hm. It's interesting to watch because we've heard so many of those arguments although not as in your face from the left in recent days. I mean, in particular about capitalism and you include a lot of Elizabeth Warren in there, that you didn't build that and how we need to rely on Uncle Sam. And the critics of that argument has said, that they are infantilizing a nation.

D'SOUZA: You know, let's begin with Abraham Lincoln who mentioned earlier. You know, slavery which is often used as a sort of central indictment against America. But slavery existed all over the world. Slavery in India, slavery in China, slavery in Egypt, slavery all over Africa. American-Indians had slaves long before Columbia's got here. So, what's uniquely western is the abolition of slavery. There's no history --

KELLY: It's not like we dreamt it up and started doing it on our own.

D'SOUZA: We're the only country that fought a great war to end it and that's when Lincoln comes in. Because 300,000 northern whites died to secure for the slaves the freedom that the slaves could not have won for themselves.

KELLY: That's an interesting point. And also it was interesting how you touched on, you know, the growth of government in recent days and how you could commit three felonies a day and not even know it. Was that, I mean, of particular relevance to you since you have been pushed by the federal government into, you know, pleading guilty to federal charges that you paid -- you manipulated the election system to give donations to a candidate you like?

D'SOUZA: Well, I make a cameo appearance in the film and you do, too, referring to my case. But what I wanted to do was tell a bigger story and the bigger story here is for the first time, I think in American history, we have an administration that is using the powers of the state to systematically go after its critics. Carter didn't do that. Clinton didn't do that. So, this is not a matter of being a liberal or being a democrat. I think we're seeing a new low in which --

KELLY: Did that change the way you feel about America?

D'SOUZA: It stunned me little bit. Because this is a third world type of behavior, I grew up in a culture where the government brings in the military to go after its critics. It sends tax people after people it doesn't like. So, these are the kind of tactics that we become cynical in other countries because we're so used to this kind of stuff. Part of the idealism in America is it doesn't happen here, but it's beginning to happen here now.

KELLY: Dinesh, it's a fascinating film.