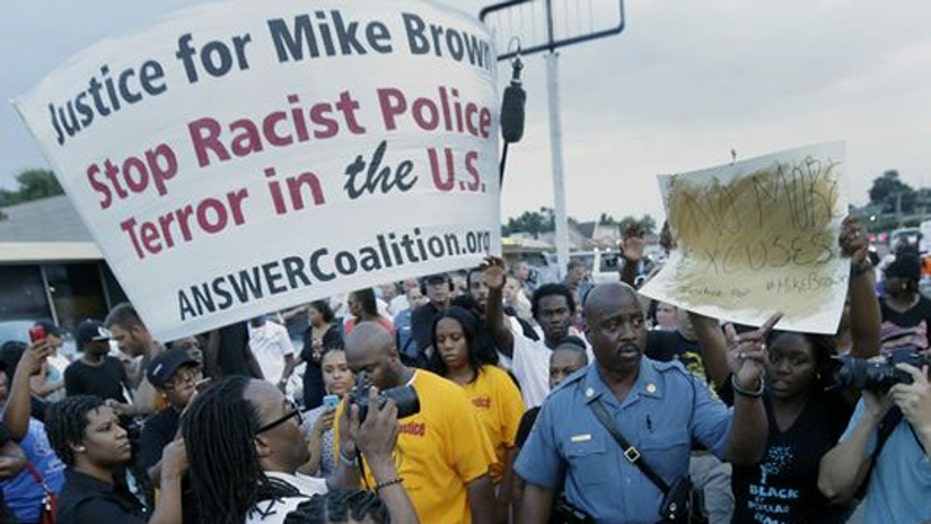 Income inequality to blame for unrest in Ferguson?

MICHELLE FIELDS: These are opportunistic thugs without morals. Unfortunately there are a lot of people suffering in this economy, but they don't go and damage private property like what's happening in Ferguson. The people in Ferguson, they don't care about Michael Brown. They are trying to get free stuff. That's what this whole thing is about. 163 People have been arrested so far. Only 7 of those 163 people are actually from Ferguson. So what we're seeing is tons of criminal tourism. People are coming from New York, Chicago, coming to get free stuff to take advantage of a very unfortunate situation.

BASIL SMIKLE: Criminal tourism, I like that term. I'll give her credit, though. There's a small number of folks that are doing this from outside the community that are opportunistic. But the reality is that the anger is widespread. Some people are not going to take to looting, some people are not going to take to violence, but that anger is still there. So the question is how do they use that anger to promote peace, but also talk farther down the road about how to bring more prosperity.

WAYNE ROGERS: Well, i think it destroys all confidence they have in the ability of the community to control itself. You know, Eric, the terrible part about all of this, the press just promoted something that way out of line. For example, over the weekend, July 4th there were 82 shootings in Chicago. 18 People were killed. Hey, where was, you know, the Wright reverend for that one? Where was he there? All of these people promoting this kind of stuff, why don't they pay attention to other things going on? They picked on Ferguson and they made Ferguson a big thing, and it's not judge a big thing.

NEW CALLS TO DEFEAT ISIS BY STOPPING ITS CASH FLOW

WAYNE ROGERS: Well, Eric, I think you use everything you can. You're dealing with fanatics. In the case of Israel, they said they want to wipe them off the face of the earth, they want to bury us, and they want to do all of these things. When you've got fanatics there's no dealing in a rational way. So yes, we should chase out everything we can economically to cut them off. Air strikes have been very valuable to us. All of those things. No boots on the ground, that's wonderful, but you've got to cut them where they hurt. And the economic place is a perfect place to do it.

JONATHAN HOENIG: These are terrorists; these are killers, not pension fund trustees. You know, it's like saying we could have won WWII by boycotting sausage. The only answer is war; total war against ISIS, against Hamas, against Jihad, and the states that support it, particularly Iran. Obama will bomb to help Iraqis. Bush will bomb to help Afghanis. Who will bomb to help Americans? That's the government's only role.

BASIL SMIKLE: Listen, I'm worried about this, because, yeah, I think we need to go after their money supply, but the reality is, we can't just stop them. We have to defeat them completely, which means going into Iraq, going into Syria. The jury is out as to whether or not the President had gone into Syria earlier it would have stopped. I don't think it's just drones. You may have to put boots on the ground. And I don't America is willing to do that right now.

MICHELLE FIELDS: Well, I think he's sending the wrong signal, of course. But I do not think there should be boots on the ground. What's happening there is terrible, but I think we should limit it to air strikes. Right now they have control of seven oil fields and two small refineries. What they need is money. They've taken over a large territory that takes a lot of money to fund that operation, to fund terrorist activities. I say we destroy their oil revenue, their vehicle transports. That's how we destroy them. They need a lot of money to become a self-sufficient state which is what they want. So take away their money.

JONATHAN HOENIG: Eric, opinions are like smiles. Everyone has one. Everyone is permitted to share them. You would hope that a celebrity in a position of influence, especially with young people, would put forth a positive message, something that makes sense and lifts people up. This whole notion that there is a war on black men I think is racist. I think it's an insult to soldiers and to African American men.

WAYNE ROGERS: No, of course not. Eric, we are a nation of laws. We are supposed to be a nation of laws and not of people. I blame the press for this. Why doesn't the press go after somebody like these people to promote whatever they are doing in that way instead of talking to people like Bill Cosby or something like that who is a rational black person who can speak responsibly for the community?

BASIL SMIKLE: One thing I want to see a lot of these celebrities do, they need to be able to call attention to the issue, but I would love to see them put their money into funding education. The schools in a lot of these communities are not training young people to be competitive in the market these days. If they could pool some of their money and help these kids, I think we'd go a long way in solving a lot of these problems. I don't mind them talking, the problem is they're unfiltered, but if they are going to use their celebrity I would rather them put money into the community and support some of these institutions.

MICHELLE FIELDS: I think they ought to just be quiet and put their money where their interest is. Don't go out there and give your opinion, which is usually uneducated. Go fun an organization. Go fund education. Spike lee says there is a war being waged on young black men by white people. Well, actually, spike lee, no. That's not what is happening. Most of the crime and murders against black people are by black people, not by white people. I think they should focus on education and putting their money where they are interested, not going out there and saying stupid things.