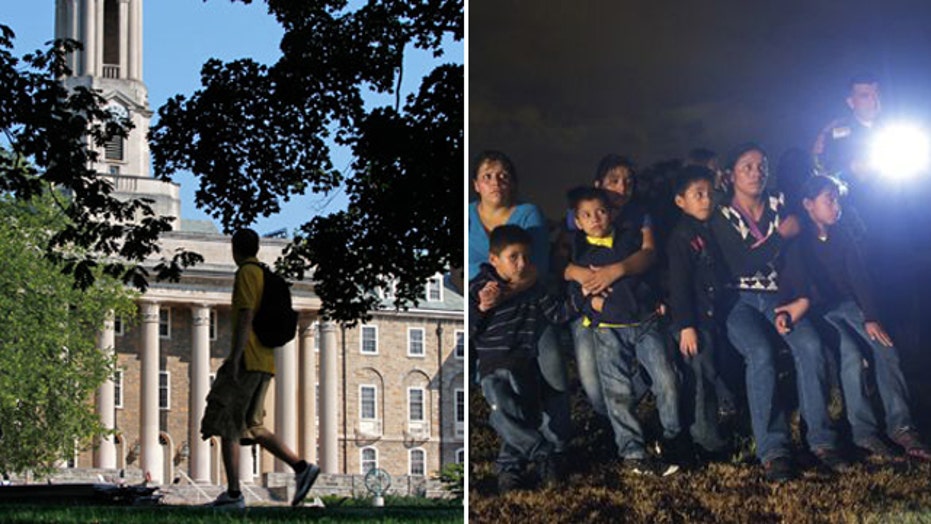 LISA BOOTHE: 60 percent of Americans think the country is on the wrong track, but Hillary Clinton is not that different from you and me. She puts her pantsuit on in the morning one leg at a time, just like you do. In all seriousness, Eric, we shouldn't be surprised by this. The liberal media has worshiped at the shrine of President Obama for the past six years, and Hillary Clinton's going to be no different. But instead of playing "gotcha" questions with Republicans, they should be getting to the bottom of the email scandal, asking her questions and calling her out on her hypocrisy on things like women issues; when the Clinton Foundation takes money from countries that are known to oppress women.

JONATHAN HOENIG: They're chasing after her because Hillary's like Oprah. Whether you like her or not, she's a political rock star, recognizable all over the world. I think the media isn't challenging her on the economic issues because they largely agree with her. The culture largely agrees with her about taxation, about redistribution, about how evil the wealthy are. That's someone like Ted Cruz's economic policies are seen as radical. Whereas Hillary is essentially continuing the Obama redistribution.

MICHELLE FIELDS: She's out of touch. She feels as though she's not accountable to anyone.

WAYNE ROGERS: Well, this is so condescending. For her to sit down and talk about the downtrodden; meanwhile, she's living in a million-dollar mansion herself. She hasn't had a car in 25 years. She's driven around. She talks down to the secret service, uses them like servants. The whole thing is just distasteful.

MICHELLE FIELDS: I mean, these are the programs that basically encourage people to come here illegally. Because they know if they come here, not only will they be treated great, but they'll be treated better than American citizens. How is it fair that my family came here the right way from Honduras, and if I were to go to college out state, I would have to pay more than someone who broke the law? Every dollar going to an illegal is a dollar not going to help our own. It's not noble to help out a stranger when your own people are drowning. We have people who are, you know, living in poverty. 1 in 3 children are living in poverty. We have college students who are knee-deep in debt. These are the people we should be helping; not illegals.

JESSICA TARLOV: What about the fact that there are over 800,000 kids who stand to benefit from the Dream Act? Economists predict they're going to contribute up to $1 trillion to the economy. Also, these are not all border jumpers who did this on their own. A lot of people came here when they had no choice. Their parents may have broken the law but they didn't.

MICHELLE FIELDS: Look, I think it's good that his employees can justify a $70,000 minimum wage. But I don't think this is representative of the minimum wage debate. We're not talking about people who are flipping burgers. The people who are out on streets, upset they're being paid $10 an hour rather than $15 an hour should go and improve their skill set, and then maybe they can command $70,000 or more. It's not about getting the government involved, it's about improving the skill set.

JONATHAN HOENIG: Well, I mean, I have to say, think he's pretty foolish. He's a second hander. He's a real Peter Keating type who needs other people to like him. We know he's an Obama fan boy. Obama met with him. What is his whole point here? You know, that it's a moral imperative that CEOs don't make so much more than the lower employees. The truth is, he's worth a lot more. He's the one who started the company when he was 19-years-old. I don't know. His employees seem to like it. It's almost like you're saying "you're not really worth this amount of money but I just feel so bad for my success I'm going to, quote, share the wealth". Straight out of Obama playbook.

JESSICA TARLOV: I think that what he is trying to do is trying to draw attention to an inequality problem that we have in this country. The overwhelming majority of Americans feel that way. 40 percent of them think corporations actually need to play a role in fixing that.

WAYNE ROGERS: Look, it's his company; he's entitled to do what he wants to. It's a free market. I'm just disappointed he's paying it out in salaries because the government is going to get a piece of that in taxes. I'd rather him just make a charitable contribution and give it to his people that way. I applaud him. Look, it's his money, let him do it.

LISA BOOTHE: I don't support a minimum wage increase because it's a job killer. But he's a private business owner. If he wants to do this in between hugging trees, good for him. As long as the government's not coercing him to do it, I'm fine with it.