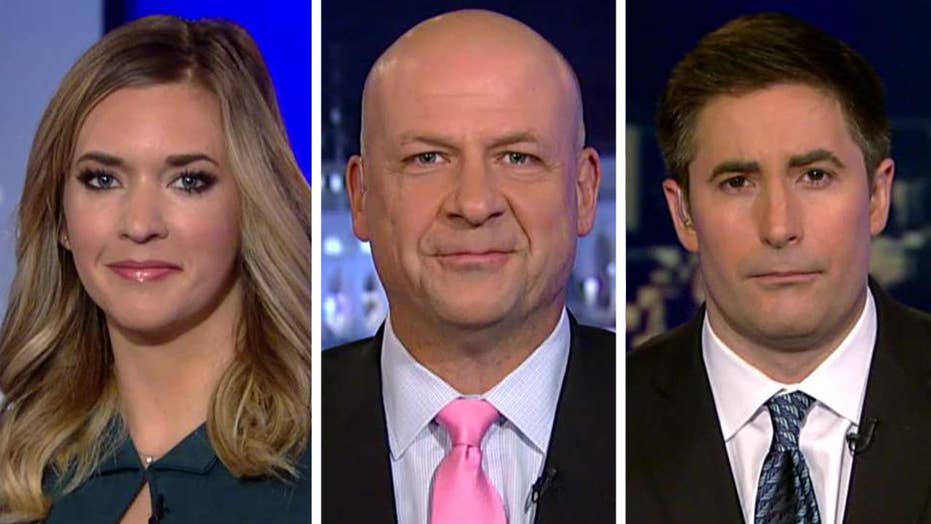 This is a rush transcript from "Special Report with Bret Baier," November 1, 2018. This copy may not be in its final form and may be updated.

PRESIDENT DONALD TRUMP: We are moving them out. This endemic abuse of the asylum system makes a mockery of our immigration system, displacing legitimate asylum-seekers -- and there are legitimate asylum-seekers -- while rewarding those who abuse or defraud our system. Those who choose to break our laws and enter illegally will no longer be able to use meritless claims to gain automatic admission into our country.

If these caravans are allowed into our country, only bigger and more emboldened caravans will follow.

BRET BAIER, ANCHOR: President Trump at the White House today saying America is a welcoming country, but he will not allow the generosity of America to be abused by those who would break the laws, saying he's changing the process essentially for asylum and that the U.S. military is going to build tent cities along the border and that people will be held there while they wait for their asylum claims to be processed. This as he tweeted a video that raised a lot of eyebrows today.

UNIDENTIFIED FEMALE: He says he wants to apply for a felony he committed, attempted murder.

BAIER: And it goes on to show someone who is convicted of murder in the country, let in again. That person in that video, actually, shown at the end, came back in in the Bush administration.

JONATHAN SWAN, AXIOS: Yes, when you talk to people who are close to him, they are almost joyful about this caravan situation. I'm talking about pure politics here. They think this is a political gift, and they want to put as much attention on it as possible. They want as much media attention on it as possible. And the president in this last week making this the centerpiece of his argument.

BAIER: Katie, I heard the Defense Department talking about what they are hearing intelligence-wise from their partners in Guatemala and Mexico, saying that there are real dangerous figures. It's not just mothers and children in this caravan. But it is going to get some time to get to the border. The national emergency part is -- some critics question.

KATIE PAVLICH, TOWNHALL.COM: Senator Chuck Grassley, who is on the oversight committee and handles a lot of these immigration issues also sent a letter to Secretary Nielsen and Secretary of State Pompeo today asking for more details about who these people are because they received intelligence there are violent actors, MS-13 and other national security threats, and they want to know how to separate those people from those who are actually trying to seek asylum in the United States.

When it comes to the timing here, you can criticize the president going after this issue when the caravans now are thousands of miles away. However, you could also argue he's trying to be proactive in stopping thousands of people getting here before they are out on the front door on the border and causing yet another crisis for border patrol and our customs enforcement agents.

BAIER: Tom, when you ask people what's most important, immigration comes in, like, third, depending on where they live. Border states, it's more important. But it does cross party lines, this issue of national security and the border and dealing with it effectively.

TOM BEVAN, REAL CLEAR POLITICS: It does, and certainly it puts Democrats in a very tough spot. What are you going to say? Sure, let everybody in, that's not a winning message for them. So definitely the Democrats do not want to talk about the caravan at all. They want to talk about health care.

It's interesting, though, Trump just cited in his press conference today, this is the best economy ever but he's not running on it. And the reason he's not running on it is because voters don't vote out of gratitude. They vote out of fear, anger, and frustration. This is of issue that riled up his base, and that's what the Republicans need in five days. They need the Republican base to turn out. Trump is tripling down. He thinks this is the answer. We'll find out whether he's right or not.

BAIER: But it is affecting some of these red state Democrats. I just talked to Claire McCaskill in Missouri. She said in the interview she is 100 percent behind President Trump in his efforts to secure the border.

SWAN: And she looked noticeably uncomfortable when you asked her that question. I watched that interview. She is someone who the polls suggest is very vulnerable if not likely to lose. And she does not want to be talking about this issue, because, again so many red states are with Trump on this issue.

BAIER: Here is an NPR/PBS Marist poll in the past few days about the issues. Economy, jobs, health care, immigration third, and you see the breakdown, all voters, GOP voters. Was it a policy speech or a political speech, Katie, at the White House today?

PAVLICH: I think you can argue that it's both. Obviously it's political because we're up against a midterm election where President Trump had repeatedly said my name isn't on the ballot but my policies are, and the issue of bringing up illegal immigration, showing the caravan, the White House releasing that ad, hammered that point home.

But when it comes to policy, this is a crisis. You have 2,000 people a week coming over the border. You go down and you talk to these folks. The agents there are demoralized because they are now babysitting and taking care of people in these, call them tent cities, in these facilities. They feel like they are not capable of doing the job which they were sent there to do, which is to secure the border and keep bad actors from coming into the country.

So when it comes to policies, he laid out a lot of things today. We'll see if they can actually get them done when it comes the asylum claims being only made at the ports of entries. When it comes to holding families longer than the 20 days as they are required with Flores. But I would say that it was both. Yes, it's political because of the time that we are in. This is a huge issue for GOP base voters which are essential in a midterm election. But also there is a very serious crisis with Central American illegal immigrants coming here and having no way under U.S. policy and law to immediately deport them back to their home countries.

BAIER: I want to go to everybody's individual race that they pick that they are interested in. But quickly, Jonathan, you had this interview with the president in which the birthright citizenship issue, a scoop that you had came up and was confirmed. Also this about enemy of the people, this exchange with Jim VandeHei.

JIM VANDEHEI: Do you worry at all? You are the most powerful man in the world. If you say that word "enemy," "enemy," literally tens of thousands of people go into a stadium to listen to you. And then people go on social media and they get themselves so jazzed up. There's got to be a part of you that's damn it, I'm scared that someone is --

TRUMP: It is my only form of fighting back. I couldn't be here if I did that.

VANDEHEI: You won. You have the presidency.

SWAN: It was an interesting moment because we'd been interviewing the president at that point for about 15 or 20 minutes. The interview wasn't actually going that well. We were asking policy questions, pressing things, and he didn't look that comfortable. And the weirdest thing was Jim starts really converting him on this issue of his rhetoric. Trump almost relaxed as the conflict went up. It was like he finally looked like he was sort of -- and he made very clear that he's completely unfazed by any thought of potential consequences of this language. And he says -- he actually said in the interview, basically my people want it. They love me more because of it. And Jim said, yes, but you're the president.

BAIER: The question, Tom, on that front, is whether the past two weeks with the shooting and the pipe bombs changed the dynamic towards the Democrats in some of these suburban House races, that maybe some of them who were going to their parties said, well, wait a second, I don't like that rhetoric.

BEVAN: It's obviously very, very hard to quantify the impact of either these events. And I suspect this point how divided the country is, how locked-in people are to their choices, the impact is probably nil in terms of it's not going to change minds.

BEVAN: It's a wash. Will it motivate folks to turn up who wouldn't otherwise have? Probably not. I think at this point the cake is pretty much baked.

BAIER: Lightning round on the races that you picked that you are interested in. Katie first.

PAVLICH: I'm interested in Arizona. I'm from Arizona. Kyrsten Sinema versus Martha McSally. The polls have them all over the map. Real Clear Politics has Sinema up by 0.7 but a local ABC 15 poll came up today with McSally up by seven, interestingly enough among young independents breaking for McSally, which I thought was an interesting point. So we'll see if she can pull it out next week.

BAIER: We're getting word that the Green Party candidate there may be getting out of the race and throwing her support to Sinema, like the libertarian in Montana. How much that makes a difference, we don't know, how many points that is. What's your race?

BEVAN: I want to pick something people hadn't talked about before, but I have to go with the Florida governor's race for this reason. We had poll come out, CNN poll. Two weeks ago they had Gillum 12, now they have got him up by two. This race has tightened considerably. In our Real Clear Politics average eight days ago Gillum was up 5.8 percent. Now his lead is half of that. So keep an eye on this race. There's a lot of movement here in the final days.

BAIER: The president there last night. Jonathan, your race?

SWAN: I chose one that we haven't talked about, Maryland's first district. I think it's a fascinating race to watch. It should be an easy Republican victory. Andy Harris, the incumbent, won I think by 40 points or something in 2016. But the Democratic candidate, Jesse Colvin, he's an army veteran. He's in that Conon Lamb mold. He's got this ad at a shooting range where he's firing, he's a really good shot, straight through the heart. And you have anti-Pelosi. So he's testing that message of distancing himself from the leftwing of the Democratic Party. We'll see if it works.

If it does and Republicans lose, we'll know pretty early in the night because it's east coast, and that's a harbinger of a pretty terrible night for Republicans.

BAIER: There are a few of those House races on the East Coast that we'll be looking at closely.