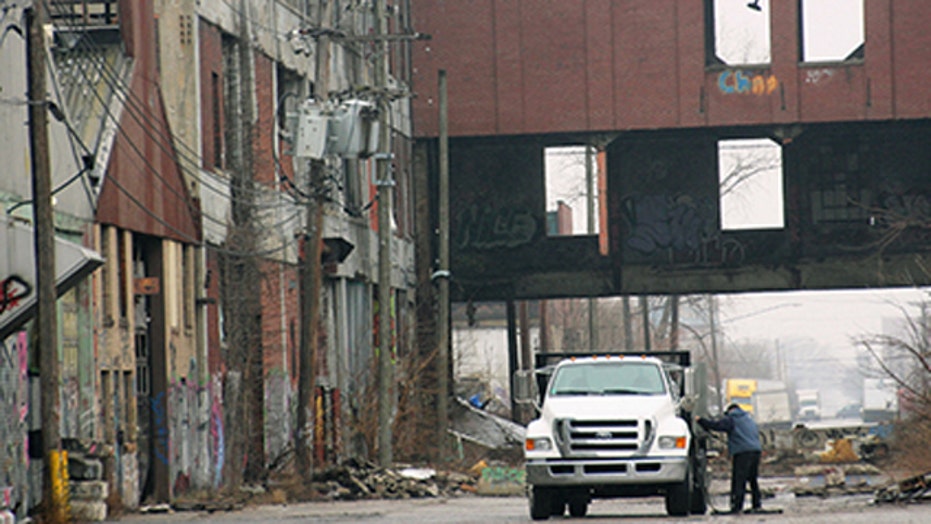 How US cities can fix their financial crises

Advice from 'Cashin' In' All-Stars

'CASHIN' IN' CREW'S FIX FOR DETROIT

JONATHAN HOENIG: They need to start by liquidating these public-section pensions, Eric. It's the progressive policies, as you pointed out-- $18 billion in liabilities on a city that has 700,000 people in it. So there needs to be two phases here. There needs to be a liquidation phase. These parasites, these public-sector unions-they've sucked the host dry; it's dead. We need to liquidate those liabilities, and ideally privatize some of this city. Whether it's the art collection or the land itself, Detroit could thrive, but you've got to get the government and the public-sector unions out of the way.

MICHELLE FIELDS: I agree with Jon on that point, but I think they need to get rid of all of these anti-business policies. Detroit right now has the highest taxes for commercial property, and they have $13 minimum wage. We can't have these types of policies and then expect businesses to come in. If we want businesses to be there, we need to lower the regulatory burden on entrepreneurs and also lower taxes.

JEHMU GREENE: I'll stay away from pointing the fingers, like Jonathan and Michelle, and calling these workers parasites, who worked and saved. We should go to the federal government and say 11 million undocumented immigrants in this country who aspiring citizens; let's give them a program that fast-tracks their citizenship if they move into Detroit. Detroit already has one of the most diverse immigrant populations, and they're revitalizing the communities that they're in in ways that are absolutely necessary. When you have first generation Americans move into cities crime goes down. We've seen that in Brooklyn; Philadelphia has benefitted from this.

WAYNE ROGERS: That's not going to do it. Detroit is a microcosm of what could happen to the entire United States. The fundamental part of this is that they have destroyed the inner city. You have 47 percent illiteracy; functional illiteracy among adults in Detroit. You've allowed everybody in the world to vote for people who don't care. They've over-taxed. They've looted the city. The way to cure this is-Jonathan is right about his second one, which I like best-privatize everything. Take that art collection, which is $3 billion, then privatize the fire department, privatize the police department. Privatize everything, make them responsible, cut the budget down to what it can do, and then go forward.

MICHELLE FIELDS: We see hackers breaking into some of the most sophisticated systems now. This system's going to have so much information-your social security number, healthcare records, your family size, your income. What makes this really troubling is that this system hasn't been completely built yet. They're estimating that it won't be ready until September 1-one month before the exchanges open. Meaning there's only four weeks for them to test this thing out and see if there are any glitches. That to me does not sound good.

WAYNE ROGERS: The whole idea is bad when you think about it. Look at the amount of fraud that we already have in Medicare, estimated at being somewhere around $75 billion. That's an enormous number. This thing is ripe for fraud. Hackers will get in there. And who's going to be in charge of this, by the way? It's take the Fifth, Lois. Remember her at the IRS? She's the one who's going to be administering this. It's an outrageous thing.

JEHMU GREENE: Eric, if there is a problem we should have our leaders work together to fix it in time for implementation. But instead, this is just another effort to discredit, undermine, and fear-monger about a healthcare that in New York alone is going to decrease premiums from 1,000 to 300 in just a matter of months.

JONATHAN HOENIG: One thing that, to me at least, is a little scary is that your health information isn't yours anymore. With government paying the bills, they're going to decide.

REPORT: SNOWDEN MAY BE GETTING HELP FROM RUSSIA; TIME TO BOYCOTT RUSSIA?

WAYNE ROGERS: I think it's foolish for us to try to boycott Russia or punish Russia for something that Russia had nothing to do with. It's our own fault. Our own security and our background checks and all of that are at fault. This guy spilled the beans on something. We made the mistake of hiring him. It's our fault. It has nothing to do with the Russians. It's up to us.

JONATHAN HOENIG: I feel bad for him, Eric. He's got to live in Russia right now, and I already boycott Russia; I don't invest there, I don't travel there. The average per capita there is about $14,000. It's $50,000 in the U.S. So I feel bad for him that he's not able to live in this great country. But I don't think, to Wayne and Michelle's point, boycotting Russia is the best idea or the right idea. All it does is hurt people who want to buy caviar, vodka, and nesting dolls. Russia's a thug, not a military threat. We should boycott and destroy military threats, not thugs.

WAYNE ROGERS: TIME TO STOCK UP ON OVERSTOCK.COM (OSTK)