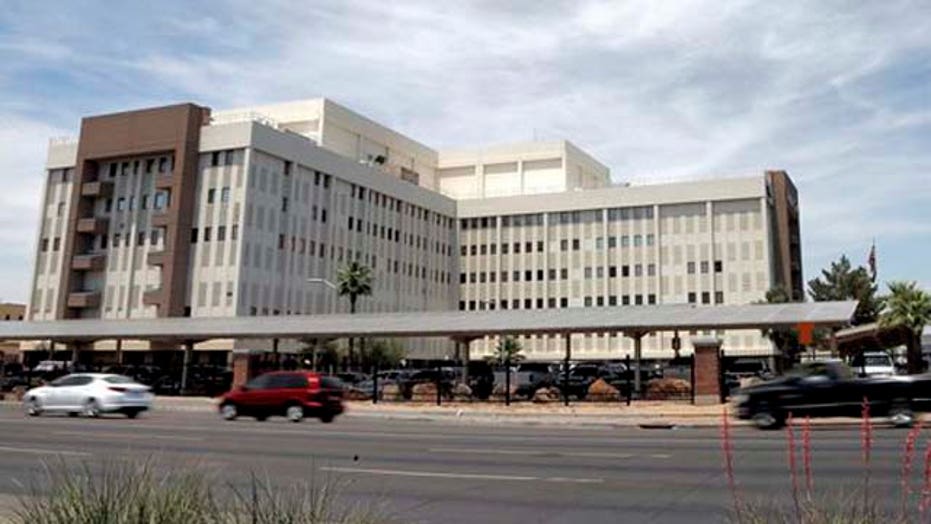 How the Veterans Affairs controversy has evolved

This is a rush transcript from "The Kelly File," May 23, 2014. This copy may not be in its final form and may be updated.

MEGYN KELLY, HOST: Welcome to a 'Kelly File' investigation on the growing VA scandal. I'm Megyn Kelly. Tonight we dig into a situation that is been called an outrage and betrayal of the ideas we ask our troops to risk their lives for. That blistering condemnation from Barack Obama himself, back in May 2008 when has a candidate for the oval office he ripped the Bush administration over the story of an 89-year- old vet who reportedly that committed suicide after being denied access to health care.

Flash forward, 60 years, and the same story is now playing out on a much bigger scale, this time with Barack Obama at the helm. Investigations are now underway more than two dozen VA facilities where veterans could not get timely care and staffers allegedly tried to cover it up with what we are told were sometimes deadly results.

SEN. JOHN MCCAIN, R-ARIZ.: Never before have I seen an allegation of the cover-up of 40 people dying.

KELLY (voice-over): Senator John McCain expressing shock about events at the Phoenix VA hospital. Ground zero to a story that took an already troubling state of affairs to a new and disturbing low.

Dr. Sam Foote of the Phoenix VA retired and publicly detailed allegations that patients have died at his facility while awaiting care that would never come. Dr. Foote alleges veterans are being ignored, that wait times are being falsified. That same month investigators visit Phoenix to look into these and related whistle blower claims.

Months would pass, and then April 9th, the story explodes when the chairman of the House Veterans Affairs Committee speaks out detailing the extend of the Phoenix VA's alleged fraud saying two sets of records were kept, one that was secret with the real and lengthy wait times, another that falsely showed bogus two-week waits. Investigators believe as many as 40 veterans may have died while waiting for appointments. Dr. Foote later appeared on ‘The Kelly File.'

You say literally that veterans are dying and have died as a result of this shoddy system at the Phoenix VA where they are literally just ignoring veterans until they die. Explain.

KELLY: Family members of the dead are stunned and outraged.

SALLY BARNES-BREEN, FATHER-IN-LAW DIED: She said we have him ready for a primary care doctor, and that's when I screamed at the lady, I did scream, and I told her you got to be kidding me. You're way too late. He died thanks to you guys.

KELLY: As the KELLY FILE reports, the President stayed silent until Fox News asks him directly about the scandal.

BARACK OBAMA, PRESIDENT OF THE UNITED STATES: The moment we heard about the allegations around these 40 individuals who had died in Phoenix, I immediately ordered the secretary of Veterans Affairs, General Shinseki, to investigate.

KELLY: A few days later, Secretary Shinseki said some officials in Phoenix have been placed on leave but the America legion says, more heads should roll.

KELLY: Meanwhile, a warning that this goes well beyond Arizona.

PETE HEGSETH, CONCERNED VETERANS FOR AMERICA CEO: It's not just Phoenix. That's what everyone needs to know. Phoenix is an example of a much larger problem.

KELLY: By May 8, the House votes to subpoena e-mails from top VA officials. The next day, Senator McCain holds a town hall on the scandal. An overflow crowd is in attendance and gives the senator an ear full.

VICKY OLSON, WIDOW OF VETERAN: I'm here to tell you that my dead veteran husband cannot be much more patient than he is today, but me, I'm pissed.

KELLY: By May 12, the scandal has spread across the number of states. The next night, hundreds pack another town hall in Phoenix, an event that was supposed to last one hour goes for four.

UNIDENTIFIED MAN: We veterans do not get the care necessary or the diagnosis necessary to give us the proper treatment that we need. This is what we get.

ERIC SHINSEKI, SECRETARY OF VETERANS AFFAIR: Any allegation, any adverse incident like this makes me as -- makes me mad as hell.

DEAN HELLER, R-NEV., SENATE VETERANS AFFAIR COMMITTEE: Can you explain to me after knowing all this information why you should not resign?

SHINSEKI: I'll tell you senator that I came here to make things better for veterans. That was my appointment by the president.

KELLY: By May 28th, administration officials try to tap down the alarm on Capitol Hill. That same day we learned 26 VA facilities are being investigated nationwide.

On May 21st, nearly six years to the day after condemning the betrayal of American veterans, President Obama makes his first extended public comments on the scandal.

OBAMA: I know the people are angry and want swift reckoning. I sympathize with that but we have to let investigators do their job and get to the bottom of what happened.

KELLY: No sooner was the President done with those remarks and the questions began. Why is he waiting for this report when there have already been several investigations? Warnings about wait times going back years, and multiple reports from the government accounting, accountability office about a system where employers were using tricks to hide what was really going on with our health care for our veterans.

Joining me now, Daniel Dellinger, whose the national commander of the American Legion. You saw him in that piece and Ralph Peters who is a retired army lieutenant colonel and FOX News strategic analyst. Gentlemen, thank you both so much for being here.

National commander, let me start with you. In the words of Barack Obama, this is a disgrace. What has changed, what has changed in the last month versus what we've been seeing over the past six years when it comes to the treatment of our veterans in this health care system?

DELLINGER: Unfortunately, we see nothing changing. And that's the problem. We really expected the Secretary Shinseki and the President be very pro-active in this, be very decisive and make changes necessarily immediately but we haven't seen that.

KELLY: Ralph, I know that you were a defender of General Shinseki's and he has very few of them right now because people are so concerned about the American Veterans. But make the case for why this distinguish man who has served our country so loyally and nonetheless is overseeing an agency

plagued by such failures should stay in his role.

RALPH PETERS, RETIRED ARMY LIEUTENANT COLONEL: Well, Megyn. Blaming General Shinseki for problems that have developed over more than a half century is like blaming your doctor for your cancer. And I would ask those who were crying to lynch General Shinseki, who would you replace him with?

Who even wants this thankless job? People generalize and say we need to bring in an outside expert. OK. Who? Give me a name. Name names. Tell me what you are going to do. The other thing, Megyn, that really bothers me about all these, on both sides of the aisle, I'm hearing a lot of outrage, some of it sincere, some that I suspect locked because people have known about these problems for a long time.

I'm hearing a lot of acquisitions but I'm not hearing people tell me how to fix it, and I think the national commander of the legion I would agree on this that is a complex and a terrible problem. Our vets deserve better. But it's also hit the VA with a perfect storm. We've not only got the Vietnam vets aging now and needing care badly, we've got vets from our recent conflicts who we were able with the miracles of modern military medicine to keep them alive.

They would have died in previous wars, but they require greater levels of care and what do we have? We're trying to treat them with a civil service that -- where we protect the bad actors, government union rules that protect bad actors, procurement rules that keep our technology, our administrative technology in the dark ages. I mean, just one thing after another. So, I just see General Shinseki as in five years struggling to undo 50 years of underfunding and neglect and he's the wrong guy to blame.

KELLY: When you talk about some of the bureaucratic problems in terms of firing bad apples, the Congress try to do something about that this week. And the Democrats in the Senate stopped it. The Democrats and the House voted for it, more control in terms of hiring and firing, the Democrats in the Senate said no. National Commander, your thoughts and response to what Ralph Peters said about, you know, this isn't General Shinseki's fault. This has been endemic. Obviously, the problems have exist and possibly grown since President Obama took office. But who would you put at the helm of this troubled organization? Where do we go from here?

DELLINGER: Well, we agree it is a complex issue but the reason, why was General Shinseki hired? He was hired to come into the VA, take the leadership that he had in the military, bring it forth into the VA, and make these problems go away. This isn't something that's new. There was a memorandum out in 2010 that outlined this exact problem. So they've had four years to do something about this, but we have seen failed leadership there.

DELLINGER: If this is a military, then you relieve the duty if it's a private sector, you're fired.

PETERS: Megyn, this is really, really, really, really hard. It takes time to fix it. You need to fire people but beyond that, you know, it breaks my heart that our vets are being treated so badly, but suddenly, it's a crisis. General Shinseki has made some improvements. Where was the outrage during the Bush years? I'm not a defender of President Obama by any means, but this is a long-standing problem.

KELLY: OK. But let me ask you this because I get that. So why didn't Barack Obama come out this week and say we knew about this. We were informed when I took office, my team was, then we have updates in 2010. We were informed that there was a severe backlog for patients trying to see doctors and some staffers at various facilities were actively working to cover it up. They were told that. They were also told about the cover-up.

So, why did he come out and say and this is what we tried to do to stop that and change the system? What we're learning now is that there were some failures. We didn't hear that national commander. We heard, let's wait for yet another IG report.

DELLINGER: Exactly. And this isn't the first Senate desk. VA is already admitted to 23 preventable deaths and then there was report over the weekend where they paid out over $36 million in compensation for wrongful deaths. So they know that this has been an ongoing problem. That's where the accountability, the transparency needs to come forward.

KELLY: Gentlemen, good of you both to be here. Thank you so much.