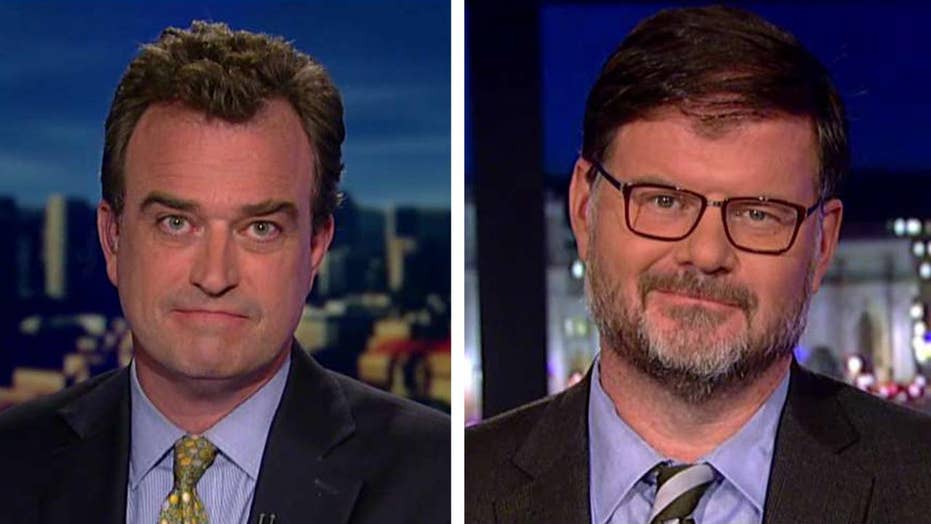 How the tax reform rollout will play out for Republicans

This is a rush transcript from "Special Report with Bret Baier," November 3, 2017. This copy may not be in its final form and may be updated.

PRESIDENT DONALD TRUMP: You want to look at the new book that was just put out by Donna Brazile.

TRUMP: She basically bought the DNC and she stole the election from Bernie.

CLINTON: You're going to be criticized no matter what you do.

UNIDENTIFIED MALE: It is shocking that this degree of collusion on some level was taking place during the time of the Democratic nomination fight.

JEFF WEAVER, FORMER SANDERS CAMPAIGN MANAGER: If Vice President Biden had gotten into the race in 2015, would he have compete against the DNC the way that Senator Sanders did?

CLINTON: It can be a very brutal experience.

BRET BAIER, ANCHOR: There you can hear some of the sounds of the Democratic Party dealing with battles from within as this book from Donna Brazile, who was in the interim had from the DNC, talking about, essentially, the 2016 primary on the Democratic side being rigged. It doesn't happen in a vacuum, it happens just days before elections, an off year election, a big one in Virginia. Here is the Democrat governor of Virginia talking about this.

GOV. TERRY MCAULIFFE, D-VA.: It's regrettable that Donna thought this was the time she should come out with this complaint. I mean, God love the Democratic Party, but --

UNIDENTIFIED MALE: Do you think it's pretty bad timing for Tuesday?

MCAULIFFE: Very bad timing, and just regrettable. We are unified in Virginia. And the Democrats, they love to have this circular firing squad.

BYRON YORK, THE WASHINGTON EXAMINER: Boy, is the president enjoying this. This is the continuing rift of Hillary and Bernie that has not healed and doesn't appear that it's going to heal any time soon.

And to have a person of the stature of Donna Brazile, this is not a bit player coming out and saying this. She was the woman who was selected to try to heal the party after Debbie Wasserman Schultz flames out the day before the Democratic convention. So for her to come out and say that this was a rigged game.

And also do two things, also, she not only throws Debbie Wasserman Shultz under the bus, she runs over her multiple times. And she also actually indicates that the ultimate leader of the Democratic Party, President Barack Obama, really abandoned the DNC and wasn't helping at the time. So this is really a full-scale indictment of the entire power structure at the DNC.

BAIER: We should make one correction. James Rosen had $15 billion in the red. It was $15 million. But President Obama did leave the DNC in a tight financial spot. Take a listen to some Sanders folks. We have not heard from Senator Sanders. He has been asked about it, he hasn't answered the question. But others around him have talked about it.

JEFF WEAVER, FORMER SANDERS CAMPAIGN MANAGER: I can tell you that I'm angry. The rank-and-file of the Democratic Party you should choose the nominee of the party, not party elites. You cannot have a political party in a hotly contested presidential primary being controlled by one of one of the candidates.

REP. TULSI GABBARD, D-HI.: This is just further evidence that the DNC needs to be completely overhauled. We must care more about people than protecting the status quo. No more games, no more retaliation, no more picking of winners and losers.

BAIER: Michael, to Terry McAuliffe's point, this is a Democrat self- inflicted wound. This is not Trump trying to turn the page from the Russian investigation or anything else. This is Democrats.

MICHAEL CROWLEY, POLITICO: Yes. And I know that Hillary Clinton, her allies, are furious at this. And colleagues of mine have reported being inundated by texts and emails. It's just anger roaring out from that world, and feeling particularly on a week where Democrats had it going pretty good. Paul Manafort and Rick Gates are indicted and George Papadopoulos signs a plea agreement that, to Democrats' eyes, really propels this narrative of potential collusion with Russia forward.

And in general Democrats were relishing what appeared to be civil war in the Republican Party. When you talk about intraparty fighting, we are all talking about Steve Bannon going after incumbent numbers of Congress. Now suddenly we are all reminded of the fact that the Democratic wounds are extremely raw, that the Bernie Sanders crowd never got over the primaries, and indeed believe that Bernie could've beaten Donald Trump, that only Hillary Clinton could've lost to Donald Trump. That's the view among many hardcore liberals. So absolutely a rough turn events for the party.

BAIER: Less so maybe about reliving 2016 and more about the party where it goes next?

TOM BEVAN, REAL CLEAR POLITICS: Exactly. This was Donna Brazile shoving the Clintons out the door. There has been talk about a changing of the guard. There's been challenges to Nancy Pelosi and other Democratic leadership. But this was pretty dramatic. We haven't seen anything like this in some time. Donna Brazile is going to sell a lot of books. That was her intent. But it was also just a real indictment of the Democratic structure.

One of the other things that Bernie said when the case was rigged against him was the super delegates. We may see now a push for Democrats to reform the process. So the super delegates, which lined up in favor of Hillary Clinton and really helped propel her to the nomination, that might be up for grabs in the coming years.

BAIER: Now, I will say some news organizations have picked it up today, but when it first came out, it was a tree in the woods if you weren't watching this channel. There was not a lot of coverage. Here is Rush Limbaugh's take on what happened in the Clinton world.

RUSH LIMBAUGH, RADIO TALK SHOW HOST: Nobody sensed the Clintons took office in 1993. There has not been a single act of what you would call disloyalty until yesterday. The swamp does not want any of this exposed, and yet here comes Donna Brazile. You swamp creatures had better understand something, this is why Trump is president. This is why Trump was elected. He simply is reflecting the thinking of millions of Americans what is going on.

YORK: Well, I think he actually has a point. We should point out that we know this Donna Brazile expert because "Politico" published it. So that's good.

BAIER: I give them credit.

YORK: I do think that -- look, the Clintons basically starved, they took the oxygen out of the Democratic room. They starved challengers in the crib. They did something to make sure that they really weren't challenged. In 2016, look at the Democrats who ran. You had one 74-year-old man who didn't have anything to lose, you had Martin O'Malley, the only guy in the real sweet spot for a president who just went absolutely nowhere. A lot of the talent in the Democratic Party stayed out of the race because they were intimidated by the Clinton machine. And I think Limbaugh is right that what you see now is the Clintons are weak enough to be attacked.

CROWLEY: That's what I was going to say. This is a reminder that the Clinton era is really over. Donna Brazile was not some fringe left-wing character. She was a party establishment mainstay and had spent years defending the Clintons. But this is a sign that the page has turned and people are casting their lot with where they see the future of the party. And increasingly I think it is the party's liberal wing.

BAIER: Quickly, the president did tweet today when he got his Twitter from 11 minutes last night. "Pocahontas just stated that the Democrats led by the legendary crooked Hillary Clinton rigged the primaries. Let's go FBI and Justice Department." A bit of cheerleading on the sidelines. Pocahontas of course is Elizabeth Warren, senator from Massachusetts, and that is the president's name for her.

BEVAN: Who agrees now the election was rigged, but supported Hillary Clinton at the convention. It's ironic because I just received an email earlier and I'm sure everyone did as well, that there is a series of events now celebrating the 25th anniversary of Bill Clinton's election in 1992. They're going to be taking place all around town. So it's sort of an ironic capstone to the Clinton era.