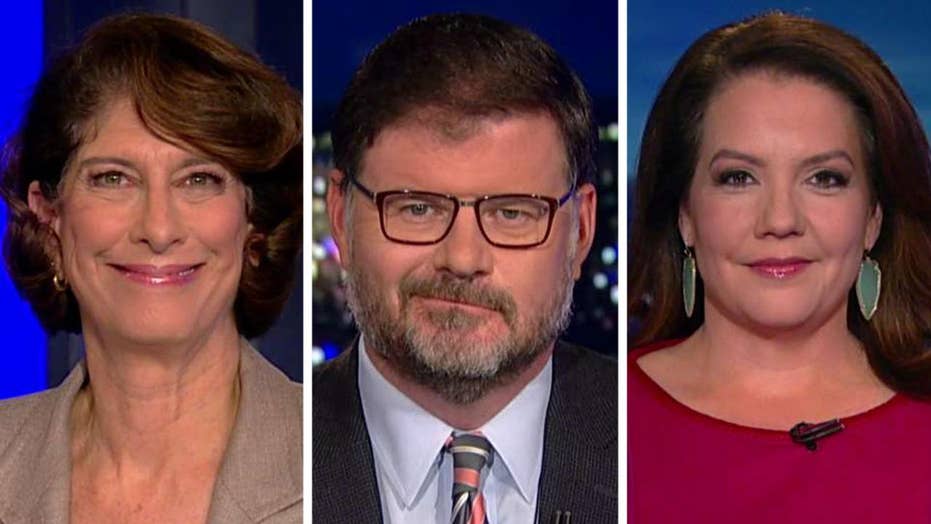 How the president's trip to Asia is going so far

This is a rush transcript from "Special Report with Bret Baier," November 6, 2017. This copy may not be in its final form and may be updated.

PRESIDENT DONALD TRUMP: Some people said that my rhetoric is very strong. But look what has happened with very weak rhetoric over the last 25 years. Look where we are right now.

JAPANESE PRIME MINISTER SHINZO ABE (through translator): Japan and U.S. are 100 percent together.

BRET BAIER, ANCHOR: Should the U.S., do you believe, try to shoot down the next missile that flies over Japan? And so you believe that the U.S. has the capability to do that?

ABE: The United States has a duty to defend Japan if and when Japan is under attack.

BAIER: Here in Seoul, South Korea the president's trip continues as you take a look at the map starting in Japan, then here to Seoul and then on to Beijing and China, Vietnam, and the Philippines.

What about this trip and how it is all coming together? Let's bring in our panel: Mollie Hemingway, senior editor at The Federalist; from Washington Mara Liasson, national political correspondent of National Public Radio, and Jonah Goldberg, senior editor of National Review.

OK, Mara, the importance of this trip, and what do you think the president is trying to come away from the trip with?

MARA LIASSON, NATIONAL PUBLIC RADIO: Well, the trip is really important. The region is the most important relationship that the U.S. has in the world now and it's some of the biggest challenges. I think the president wants to come out with new wins on trade if he can, some new investments, some countries that are going to buy our weapons.

But I think overarching, much more important than that if he can make some progress on the North Korean situation. He says the era of strategic patience is over. The administration has said that before. But we're not quite sure what will replace that except for tougher sanctions. And we don't know if tougher sanctions are going to budge the North Koreans and get them to give up nuclear weapons which they believe is the key to their survival, the survival of the regime.

BAIER: Jonah, there is a sense here, as I met with the Japanese prime minister and talked to other officials, there is a fear, really, that U.S. will act militarily and that it is going to change this entire region. While they want to get North Korea to the table, there is this skittishness about what is going to happen in coming weeks.

JONAH GOLDBERG, NATIONAL REVIEW: Yes. I think Donald Trump's point about the weak rhetoric of the last 25 years is a good one. I think a stronger point would be weak policy. We have had fairly predictable policy for 25 years and that's why North Korea is where it's at. I don't like the way Donald Trump talks about some of these sorts of things, but he has inherited a problem, he hasn't created a problem. And a little unpredictability from the United States putting North Korea back on its heels and China back on its heels might be a good thing. Better to have a little unpredictability then predictable erosion of our national interest, which is what we have had with regard to North Korea for a long time.

MOLLIE HEMINGWAY, THE FEDERALIST: This is a five-country trip. But the first three countries tell us most what had we need to know, and that will be where things are most significant. And each of these first three countries, Japan, South Korean, and China, are going to get a different response from the president, I think. You know one of those things that is very interesting that is shown so clearly in your interview with Prime Minister Abe is this genuine friendship that President Trump has with the prime minister. I'm not sure if anyone really expected that to be the case. They meet frequently, they speak frequently.

President Trump has followed Japan's lead on many of these issues with North Korea, meeting with those families of the victim of the north Koran kidnapping. This is just a very friendly visit. When he moves to when he's now at South Korea, that's a little different. South Korean has shown so much attempt to reach out to China, reaching out to North Korea. We need to make sure that they understand that we do have their back, and we'll be having that kind of conversation.

And when we get to China it's going to be much more emphasis on the need to China and handle the situation in North Korea and letting them be clear about what economic or other means we might use to help them see that that's in their best interest.

BAIER: Mara, you looked at previous administrations and the way they handled foreign policy, and you think is it different from what is happening now? Take a listen to former secretary of state Madeleine Albright talking about the U.S. as a dispensable nation.

FORMER SECRETARY OF STATE MADELEINE ALBRIGHT: What I am worried about is we're about to be the dispensable nation where nobody thinks that we do have a role to play. And I would hope that the president, the current one, would in fact understand that what he is trying to accomplish requires the United States to be engaged in a respectful way, and stop tweeting.

BAIER: So I guess the question is, has the dynamic changed? Is this administration handling it differently? And to Mollie's point, the relationship between Abe and Trump really could not be closer.

LIASSON: It couldn't be closer. But I think the trickier relationships are South Korea and China. It's hard to see what kind of leverage Donald Trump has with China. He has done a lot of things that have given China stronger hand. Getting out of TPP, that's something China really wanted the United States to do and he did. He hasn't gotten China yet to put on the kind of really crippling sanctions he would like on North Korea. They have done a few things but they haven't really turned the screws enough to make North Korea reconsider its position.

And I think that the question that people have in the region is, what is the United States' plan? Being unpredictable is fine if you have a strategy behind that. And we don't know what the strategy is. You know, he says the era of strategic patience is over. He is going to destroy North Korea if they continue to make nuclear tests, which they have continued to do it. So far that tougher rhetoric that you hear from President Trump hasn't really changed anything yet in North Korea's behavior.

BAIER: Let me push back a little bit here. Here, Jonah, you have the addition of rocket man into the United Nations speech. Obviously that was the sound bite everybody took. And he has since talked about it numerous other times. Since then you've seen China move off the ball further than they have previously as far as financing and other things. Could they do more? Yes. But the people in this region say they have seen more movement than they have seen in the past two administrations.

Ultimately what I would like to see is the reunification of the Korean peninsula but that's a big lift. It seems to me a good plan b would be essentially the Finlandization China's problem. It should be China's problem. The United States should make it clear that it is China's problem. We now know that North Korea cannot be an honest broker with the United States. It hasn't been for 25 years, and rocket man is not a reliable partner. But China can be. And so that requires putting an enormous amount of pressure on China to actually take some ownership of North Korea. And so far there have been steps in the right direction there, but this is a long term serious work of state craft, and it remains to be seen whether this administration or any administration can pull it off.

BAIER: Let me mention this other form of diplomacy that the president is working on here, and that is economic diplomacy. He talked about at the state dinner at Japan about what he was looking for.

TRUMP: I have enjoyed every minute of it, even though he's a very, very tough negotiator.

TRUMP: Right now our trade with Japan is not free and it's not reciprocal. And I know it will be.

I have to say, for the last many decades Japan has been winning. You do know that. Try building your cars in the United States instead of shipping them over, is that possible to ask? That's not rude. Is that rude? I don't think so.

BAIER: So, he's doing it a little differently than other leaders have, Mollie?

HEMINGWAY: There is nothing that says that says that if we have free trade agreements that they must be permanent. It's fine to renegotiate things and make sure that things are working out in this country's best interest. But economic diplomacy is actually a great method in this region, which is why, as Mara pointed out, getting out of the Trans-Pacific Partnership was a unwise move and that it was one of our better means to working with some of these countries. But there is certainly more that can be done with China, and they have benefited so much from the global economy, and they have not really stepped up as a global player that matches with how much they have benefited from that. So this focus on economic repercussions, for failure to rein in bad actors is a great approach.

LIASSON: Yes, except for what's he going to do --

LIASSON: Yes. I'm just wondering, what is the leverage? What is the stick that Donald Trump is saying that he is going to use? He is asking them to build more cars in the U.S. He knows that they already build some. What is he going to do if they don't?

HEMINGWAY: In China there are quite a few things that you could do. There are so many American companies that are based there and there is a lot of leverage that can be done there. China doesn't want to lose its American investments.