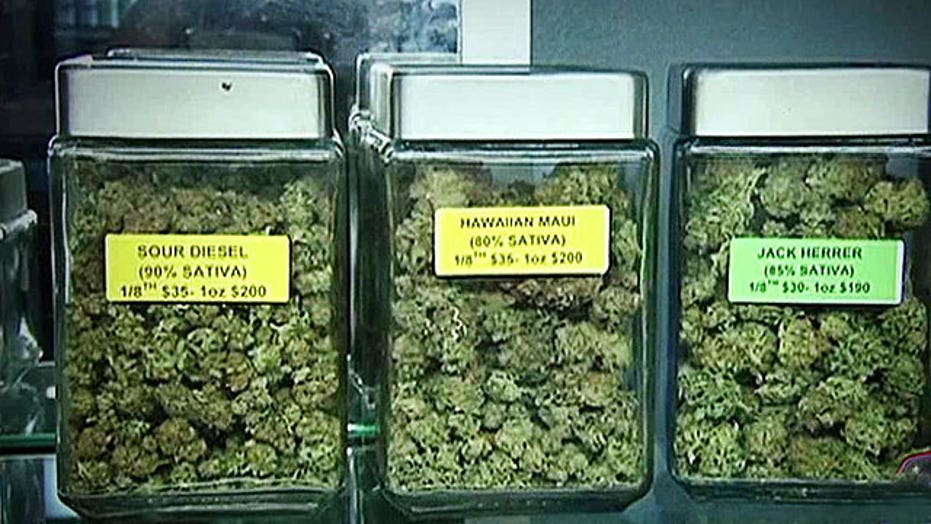 A look at what's behind the movement

This is a rush transcript from "Hannity," April 25, 2014. This copy may not be in its final form and may be updated.

SEAN HANNITY, ANCHOR: And welcome back to our audience edition of "Hannity," "Stoned America." Now, we're going to bring back our audience of experts and pundits in just a minute.

But first, advocates for legalizing pot have long claimed that it would make using the drug safer, and they even say that it would lead to an economic boom in certain areas. Well, among those who feel that way is my next guest. He helped push for the legalization efforts in Colorado and is now the director of communications for the Marijuana Policy Project. Mason Tvert is here. Mason, how are you?

MASON TVERT, MARIJUANA POLICY PROJECT: I'm great. Thanks for having me.

HANNITY: We actually went -- somebody just said you're stoned.

HANNITY: We actually just went to one of the dispensaries. We're going to show that later in the program tonight. Do you have any financial interest in this at all?

TVERT: No. You know, like most Americans, I simply think marijuana prohibition has failed, and I'm dedicated to trying to end it and replace it with a more sensible...

HANNITY: All right, so you see the kids in the video that -- when we went to the 4/20 event this weekend in Colorado. You see them. They're smoking pot. They're smoking a lot of it, very stoned. They're all happy. You heard the doctors and their observations about people that smoke pot on a regular basis, even people that went to school with them.

TVERT: Well, we know for a fact marijuana is an objectively less harmful substance than alcohol, as a lot of your guests have pointed out. It's less addictive. It's less toxic. And it doesn't contribute to the violence and injuries we see with...

HANNITY: Anybody that I've met -- I'm telling you a story if you just pay attention. Anybody I've met in my life that smokes a lot of pot has, like, zero motivation. They're not people that I consider bright, energetic, happy people. In my life, that's been my experience.

TVERT: ... just has something about who you hang out with. But the fact is that half of Americans have used marijuana.

HANNITY: Are you a parent?

TVERT: ... some of our Supreme Court justices -- you know, some of the most productive people in this country have used marijuana.

HANNITY: I'm talking about people that...

HANNITY: There's a very different distinction here between experimented, used and those that smoke it every day, those that need their hit every day. For example, let's say you have kids and you see these videos of these kids at the 4/20 event. Your 21-year-old son or daughter says, I'm going to the 4/20 event, Dad, and you're going to say what?

TVERT: ... first of all, it's illegal to consume marijuana in public, so be careful. But I'd much rather them use marijuana than go out binge drinking. I mean, you're going to an event...

HANNITY: There's a difference between...

TVERT: ... that is the equivalent of the one biggest frat party of the year for alcohol, and you're trying to somehow suggest that all marijuana users are these young...

HANNITY: All right, do you stop at marijuana?

TVERT: This isn't a discussion about crack and heroin.

HANNITY: No, you want to legalize pot. I'm asking you if you want all drugs legalized. That's a simple question. That's a logical question.

TVERT: Oh, I think that -- I think -- like most Americans, I think drug war has failed and we should reexamine those policies...

HANNITY: I asked you a question. I didn't ask you if the drug war -- do you want to legalize...

HANNITY: All right, you answered.

HANNITY: All right. Thank you.

TVERT: No, I don't want to legalize heroin and crack. I'm here to talk about marijuana, and it's...

TVERT: Clearly, you just don't like the people who use marijuana.

TVERT: You like hanging out with people who drink.

HANNITY: That's no true. No, I think there's a big difference.

HANNITY: I agree with the doctors and the experts we have. I believe it's A, a gateway drug. I believe, number two, those that use it regularly and particularly, I think they lose motivation. They lose ambition. They are not as alert and aware and as engaging as the other people that I meet in my life.

But anyway, Mason, we got to roll. Thank you. Appreciate you being with us.

TVERT: Thanks for having me.