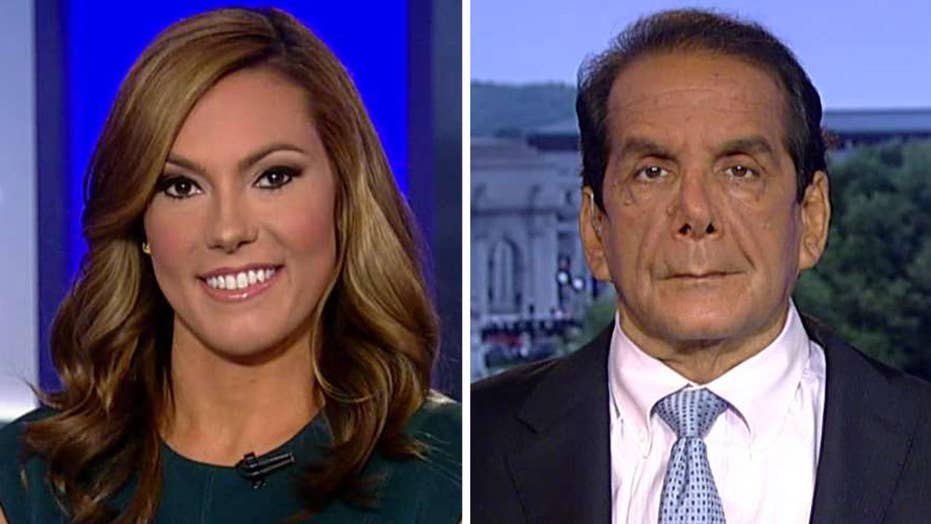 How North Korea's missile test affects US policy in region

This is a rush transcript from "Special Report with Bret Baier," July 5, 2017. This copy may not be in its final form and may be updated.

NIKKI HALEY, U.S. AMBASSADOR TO THE U.N.: Make no mistake. North Korea's launch of an ICBM is a clear and sharp military escalation. The North Korean regime openly states that its missiles are intended to deliver nuclear weapons to strike cities in the United States, South Korea, and Japan. And now it has greater capacity to do so.

BRET BAIER, ANCHOR: Stern warning from the U.S. ambassador to the United Nations talking about this launch of the ICBM this week. This was a dangerous launch not only because of what it could do but also what it did, saying it fell into the Japanese economic zone and it was a commercial area. Here's the Pentagon.

CAPT. JEFF DAVIS, PENTAGON SPOKESMAN: This was just one of many things about this that we are not pleased with North Korea's behavior on is that they did not do that. That places shipping at risk. That places commercial aviation at risk. And it places space assets at risk because these are flying into areas where there has been no coordination, no closure.

BAIER: So what will happen with North Korea? What will President Trump do with European leaders and with his meeting with Russia's president and Chinese president over the next couple days?

OLIVIER KNOX, CHIEF WASHINGTON CORRESPONDENT, YAHOO! NEWS: It raises the stakes for President Trump's meetings in Europe with President Xi of China, but also the Japanese prime minister and the South Korean president, and president Putin of course. In the short term it appears that the United States has been pushing for more sanctions, or perhaps just to enforce the current ones properly. A senior White House official told reporters at the White House a few weeks ago that when you watch North Korea's annual military parade at Pyongyang, you have to understand that nothing in that parade is made inside North Korea. And that's a testament to how poorly the sanctions regimes are enforced.

BAIER: So Lisa, the president tweeting this morning before leaving for Warsaw, Poland, "The United States made some of the worst trade deals in world history. Why should we continue these deals with countries that do not help us? Trade between China and North Korea grew almost 40 percent in the first quarter. So much for China working with us, but we had to give it a try!" Here is the president on June 21st talking about that try.

PRESIDENT DONALD TRUMP: I do like President Xi. I wish we would have a little more help with respect to North Korea from China but that doesn't seem to be working out. But I do like the president a lot.

BAIER: So it doesn't seem to be working out, I think that's the recurring message the president is sending. So what now?

LISA BOOTHE, WASHINGTON EXAMINER: I think that certainly is the case. The president is right, we have seen 37.4 increase between China and North Korea in the first quarter, so trade is increasing. We also saw Nikki Haley put trade on the table as well. We have had senators like Cory Gardner call for a complete economic embargo against North Korea.

One of the difficulties of the economic aspect of this is China is in so much control over North Korea's economy, 90 percent in regard to trade. So there aren't as many countries involved with trade and with the economic buildup of North Korea, so that certainly makes things difficult. Nikki Haley also put military options on the table as well. We know that H.R. McMaster has had President Trump asked for a military plan. Clearly the difficulty with that is the proximity of the densely populated Seoul, 10 million people. Secretary Mattis has previously said this is absolutely a war that we do not want and could potentially lead to the most human casualties we've seen since 1953. So I don't think there are a lot of good options. That's the reason nobody has really come up with any.

BAIER: Yes. It's also a mobile launcher that we have seen for the first time and this two-stage missile. We had talked about yesterday, Charles, but South Korea is hosting the effects in 2018 coming up at the beginning of next year, and world nations will send their athletes to South Korea, possibly in the umbrella of uncertainty and crisis. Here is the Russian foreign minister, Sergey Lavrov, ahead of this meeting with President Trump and also obviously yesterday in the meeting between President Putin and President Xi of China.

SERGEY LAVROV, RUSSIAN FOREIGN MINISTER (through translator): We presume that the objectives set by the U.N. Security Council which all participants in the six party talks have excepted, that is the two Koreas and the neighbors consist in the denuclearization of the entire Korean peninsula, and it cannot and should not be used as a smokescreen to try to change the regime in North Korea.

Any attempt to defend a forceful solution using a Security Council resolution as an excuse is unacceptable and will bring unpredictable consequences to this region.

BAIER: So they're laying markers down.

CHARLES KRAUTHAMMER, SYNDICATED COLUMNIST: Anybody who expects we're going to get help from the Russians is whistling in the dark. The Russians have no interest in helping us out, the same way with the Chinese. They see a strategic advantage in retaining this thorn in our side.

The only place we are going to make progress is not an embargo. Economics will not trump strategic objectives. Democracies like to think so sometimes. That's how we operate. It's not how dictatorships operate. All of this stuff is smoke and mirrors, great speech by Nikki Haley. It will have zero effect.

We have two choices. We're either going to go to war or acquiesce. But there are two things that we can do in the interim that would be strategically risky but would have an effect. One would be to get the South Koreans to invite us to return the tactical nuclear weapons that we stationed there until 1991. That would get the attention of Pyongyang and of Beijing. And lastly, this is a last resort, you get the Japanese to announce they are going to go nuclear. That will get the immediate attention of the Chinese who will have to decide, which do they prefer, a divided Korean peninsula with a client state in the north or a nuclear Japan. If we are not prepared to take those steps, nothing will happen and North Korea will become a nuclear state.

KNOX: Getting tough is tough. There aren't a lot of great options. One of the challenges with, for example, returning tactical nukes to South Korea is what is the reaction from Pyongyang where the number one priority is regime survival. It's not that easy. The fact that there are between 8,000 and 10,000 North Korean artillery pieces pointed at South Korea that could reach Seoul, it's roughly the distance between the White House and Dulles airport. That means that getting tough is very difficult. It's not Syria. You can't do a one-off cruise missile strike because heaven only knows how Pyongyang is going to take it, how they'll respond. It's enormously difficult.

BAIER: Yes. And we don't know that the status of how they have miniaturized nuclear weapons to be put on those missiles, at least it's a guesstimate right now, 12 months, 18 months. But who knows, they could have been further.

Lisa, I want to forecast now ahead to Friday and this meeting with President Putin, between President Trump and President Putin. That whole relationship obviously has come into focus with all the news and all of the allegations, all the investigations. There is no indication that the president is going to mention this interference in 2016 elections. Back in the campaign, there was a back and forth about whether he actually ever met with Vladimir Putin. Here's just a taste of that.

BAIER: You were asked yesterday if you've ever spoken to Vladimir Putin, and you said I don't want to say.

BAIER: One of the things people like about you is you will answer any questions.

BAIER: So he is now going to meet him if he hasn't before. He has obviously talked to him on the phone as president. But this is a high- stakes meeting.

BOOTHE: It certainly is, with Syria as well as Russia, the joint statement from Russia and China regarding North Korea and trying to put pressure on South Korea and the United States as well. So of course there is a lot to talk about. The stakes are high given those two things I just mentioned, and also just given the fact that if you look at the broadcast networks, there's been 353 minutes spent on the Russian narrative. So clearly this is going to be what the media wants to talk about. I think any sort of chumminess is what's going to be discussed.

But I also have to think you have to look at, too, some of the actions that he's taken. President Trump has been arguably tougher on Russia than President Obama throughout his administration. The sanctions still remain in place that President Obama put towards the ends. We are trying to increase energy production which hurts Russia, increase military spending as well. We have seen strong words from Nikki Haley as well as Secretary of State Rex Tillerson. And the Obama administration didn't really do much in being tough on Russia. So I think that is something to keep in mind heading into that meeting as well.

KRAUTHAMMER: Yes, but the main item on the agenda is not Korea. The Russians are irrelevant. The main item on the agenda has to be Syria. We are now in the endgame. What we're looking to is a Potsdam Conference like the one at the end of the Second World War that divided the region, meaning Europe. We are now at the end of the ISIS phase of the Syrian civil war. We and the Russians have to decide on a demarcation line. That I think would be serious business. It would be strict realpolitik, and it's doable stuff. Everything else is pie in the sky.

BAIER: See if they both come out with some success to tout.