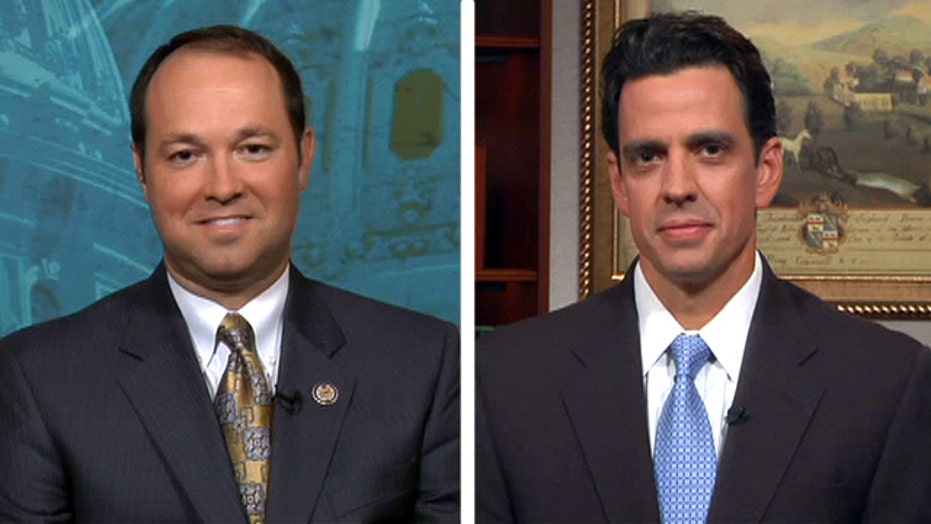 This is a rush transcript from "Hannity," September 20, 2013. This copy may not be in its final form and may be updated.

SEAN HANNITY, HOST: And welcome back to the special defunding Obamacare edition of HANNITY. In a moment, we'll bring back our studio audience. But first, one of my next guest Indiana Congressman Marlin Stutzman wrote a scathing op-ed in USA Today about the President's healthcare over haul. It reads in part, quote, "If allowed to go into effect it is hard to imagine a single person in America who won't feel its severe impact in some way. That is why Republicans in Congress are doing everything in our power to defund it and stop it from taking effect. This isn't about threatening a shutdown. This is about stopping the pain every American will feel."

Joining me now, Indiana Congressman Marlin Stutzman as well as Georgia Congressman Tom Graves. Both of whom voted to defund Obamacare in the House earlier today. Gentleman, welcome to the program.

REP. MARLIN STUTZMAN, R-IND.: Good to be with you, Sean.

HANNITY: Congressman Stutzman, how bad would it be if it goes into full effect?

STUTZMAN: Well, I will tell you this. There are over 610 employees in Fort Wayne, Indiana, that had their hours cut by Fort Wayne community schools after they discovered the cost that this was going to be to their particular organization. Kroger, they are cutting spouses' benefits. This is only causing more chaos and confusion. As I've talked to mothers who had their autistic children were kicked off of insurance programs. This is just the tip of the iceberg, Sean. It's only going to get worse.

HANNITY: Yes. What do you think? Congressman Graves, you have been active and involved in this from the beginning. Will the House hold the line? I know a lot of conservatives are wondering. Because last week the leadership tried to use a parliamentary maneuver that would have funded Obamacare even though it said defund. So, a lot of conservatives are nervous. Will you guys hold the line in the House?

GRAVES: Well, first Sean, let me just say Happy Birthday to my wonderful wife. And sweetie, I will be home soon. I think today was a very powerful --

GRAVES: Yes. I've got a few tricks up my sleeve there. But I think today was just a wonderful day for America. It's a day that the house stood firm. It sent a very bold statement that we have been listening to the American people. And that we don't want to shut down the government down. But we do want to protect our constituents from the harmful effects of Obamacare. But really the next step is in the Senate. And that's where all the focus needs to turn right now. Because there are some senators in the Democratic Party who can make somebody probably the most important vote in their political career is going to come up next week.

And you can look at North Carolina, Louisiana, West Virginia, Arkansas, Alaska. Those senators are going to have to look at their constituents in the eye and let them know, are they going to get away from the clutch of Harry Reid or they're going to vote for their constituents and protect them from the harmful effects of this law?

HANNITY: What is your sense though -- are the Republicans in the Senate united? Look, I know that Rand Paul is and I know that Ted Cruz, and Mike Lee and Marco Rubio are.

HANNITY: I believe they got about 15 that actually signed Mike Lee's proposed legislation. What about the others?

GRAVES: Well, I would say that they are very united behind doing away with Obamacare, stopping Obamacare and stopping the harmful effects. There's no doubt about that. There is plenty of unity there. And so, as we move into next week, I hope that they stand very strong. And they have to be hearing the same reports we are hearing from our constituents and seeing the same concern and fear and hurt in the eyes of their constituents. So, I suspect that they will listen very closely to their states and to the folks that they serve.

HANNITY: We'll see. Congressman Stutzman, let's assume that Harry Reid does what he's threatening to do when they send it back to the House and then we have a showdown. Do you sense that House leadership in particular and that the House members, Republicans that voted today, 230, will stand strong?

HANNITY: It's a victory -- it's not a victory, it's a half victory. Because unless you guys stand and take it to the end, it's not going to be a victory.

STUTZMAN: That's right. And that's why we have to wait to see what happens in the Senate. You know, all of the different procedural tricks that the Senate can play, who knows how this plays out? And so, we're going to have to wait and see. I agree with Congressman Graves that there are some senators over there who are up for re-election this next election who have not had to vote on Obamacare in one way or another. And this is when it really matters, Sean. This vote really matters.

STUTZMAN: And I think that when we put the heat on the Democrats in the Senate, we may find a surprising outcome.

HANNITY: I think I have a strong message from conservatives -- hold the line. Hold the line. Don't break. You know, this is why you guys were elected. This is the moment of truth I think. This is a tipping point. So, guys, good to see you.

GRAVES: Thanks for having us. Thank you.