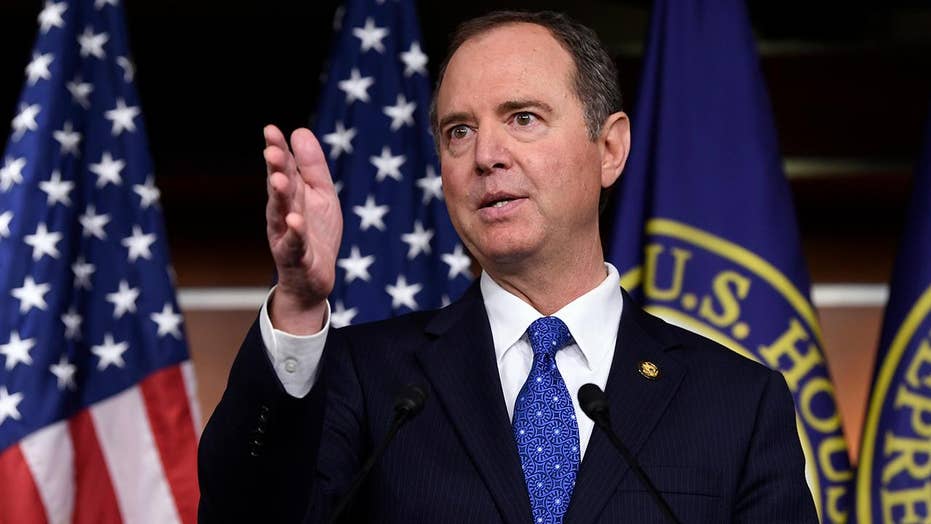 This is a rush transcript from "Special Report with Bret Baier," December 3, 2019. This copy may not be in its final form and may be updated.

BAIER: It sets the stage for the House Judiciary Committee tomorrow.

YORK: Right. This is a milestone in the impeachment process, because it marks the sort of end of the so-called investigative process that the Intelligence Committee did. This report -- which Democrats will pass in the next few minutes -- will be sent, and presumably be the basis for articles of impeachment in the Judiciary Committee. All that said, there's not a lot new in it. We did -- Mike Emanuel mentioned these phone records. We heard some references to them. That is new. But basically, Democrats have been trying -- all through the Russia affair, and now in the Ukraine affair -- they've been trying to find a way to tell the story of what they say is the president's wrongdoing. They hoped the Mueller report would do it, and then they hoped that hearings based on the Mueller report would do it. That didn't work. Now they've reversed it. They've started with hearings, and now they put together a report that they hope will tell this story, and perhaps change some minds. Doesn't seem like that's happening right now.

REP. JIM JORDAN, R-OHIO: This whole thing is built on what Nancy Pelosi said two weeks ago, when she called the president of the United States an imposter. They have never accepted the fact that 63 million Americans voted for Donald Trump on November 8th, 2016 and made him president. He won an Electoral College landslide.

REP. PETER WELCH, D-VT.: I think this report does make a very compelling case about what the framers regarded as the ultimate threat. And that is the use of the public trust of high office for personal gain. And that's essentially what the president did here.

BAIER: Democrats, Susan, are making the case this is about the constitution; this is about trying to prevent the president -- as Adam Schiff said -- from doing this again. Tomorrow we will hear from the House Judiciary Committee about the legal process and why this should be articles of impeachment or should not.

SUSAN PAGE, USA TODAY: So, the Intelligence Committee's role in this was to come up with what happened -- which they've outlined in this report. I agree there are not big surprises in this report. That doesn't mean the allegations in the report aren't serious and significant, and worth taking a look at. Now, the Judiciary Committee is going to decide, is this impeachable? Does it rise to the level of impeachment? And it feels a little like a play in which all the lines have been written. And barring something that none of us expect, it's -- the president is going to be impeached. He's going to impeach -- be impeached for abuse of power and for obstruction of Congress. And then it will go to the Senate, and he will not be convicted. Things sometimes happen that we don't expect. But so far, this has unfolded in a way that I think is pretty predictable. The one thing that's been, I think, a surprise to Democrats is the failure for the story that they feel is so dramatic to change public opinion. Public opinion remains just about where it was when this began.

BAIER: So, you're talking about, you've got bribery, abuse of power by the president, contempt of Congress, and obstruction of Congress, potentially, for articles of impeachment, three or four. To Susan's point, what about the politics going in? Two Democrats voted against this inquiry. You have 31 Democrats from districts that Donald Trump won in 2016. Is there a concern, do you think, on the democratic side about those votes when it comes to the impeachment this time?

MATTHEW CONTINETTI, WASHINGTON FREE BEACON: There better be. I mean, I think we might have gone into this process thinking how many Republicans the president would lose. That's no longer the question. Now the question is how many Democrats will Nancy Pelosi and Adam Schiff lose? Because as we've seen in this report, there's nothing new. And one thing that I think has harmed the Democrats case with both Mueller and the Ukraine is that there's a lack of an actual, of a crime, of something that people can viscerally understand; say, a break-in at a hotel. Say, a video record of perjury that everyone can see. And both Mueller and Ukraine, you're reaching for larger questions of abuse of office, inappropriate behavior, and I think that makes it harder to make the case for impeachment.

BAIER: But they say it's made. They say they need to speed it up because they're concerned that he's going to do it again. Those are the words of Adam Schiff. But you could wait. You could fight the court battles. You could try to get Mick Mulvaney and Secretary Pompeo, and others to testify. Rudy Giuliani. But they're not choosing to do that.

YORK: I think that's been one of the most mystifying parts of all this, especially with Ambassador John Bolton. They didn't even subpoena him. He would be, possibly, the most important witness in all of this. They didn't even subpoena him. Adam Schiff said he did not want to get into a game of rope-a-dope with him. But there are clear issues of privilege between what a national security advisor says to a president inside the White House. It's the kind of thing that, if the House is going to subpoena the national security advisor, it's probably going to go to court and a judge will have to decide. And the House didn't even try.

BAIER: I've heard -- and this may be reaching, but it is interesting to see Adam Schiff continue to bring Mick Mulvaney, for them to play during the hearing the videotape of Mick Mulvaney at the press conference where the acting White House chief of staff said, "Get over it." He mentioned it again today. If it goes to the Senate trial and Justice, Chief Justice John Roberts is presiding, the Senate makes the rules. But in order to make the rules, all Democrats would need to do is convince four Republicans to switch over and say -- and compel Mulvaney to testify or someone to testify. And Justice Roberts can make a decision, and they would have a majority to compel that. Is this what they're trying to do, is to get the testimony not through the courts but in the Senate trial?

PAGE: I don't -- tell me the four Republicans who are going to do that.

BAIER: Cory Gardner, up for reelection in Colorado.

PAGE: I don't, I actually don't think that's the strategy. I think there, I think they're feeling is there was no guarantee they were going to get these people in any kind of time, in six months or in a year, until after the next election. So, don't spend your time doing that. They also feel a desire to get this done and over with because there's no --

BAIER: Because of the political harm?

BAIER: Or because of the Iowa caucuses? Or why?

PAGE: -- no. Well, because we're heading into an election year. And Democrats do not think this is -- this may be helpful in the election. It doesn't look particularly helpful right now. They would like to not test that theory; they would like to get it done and over with. Schiff also said, though, and the report says that the investigation is not over. It's continuing. It sounds like they would refuse to talk to Mulvaney, if Mulvaney or Bolton suddenly became available.

BAIER: Two questions, quickly. Is the prospect of opening it up to other avenues, other things, going back to Mueller, the possibility of the tax records somehow factoring in, does this all seem possible? Or is it narrowly focused on Ukraine and obstruction?

CONTINETTI: If you open it up to Mueller, then you're going to lose more moderate Democrats when it comes to the separate articles of impeachment. I think you may find moderate Democrats voting against the article for abuse of power, but for the article for obstruction where there's clear evidence that there's been no document production, for example. The larger question is, though, where do Democrats go from here? They had their shot to change public opinion and to persuade the country that it was time to remove President Trump from office, from office, and they failed. And the reason they failed is that the small number of voters who are persuadable, they just don't care.

BAIER: And the Trump White House and the campaign saying, "We're heading into an election year," to your point, and the voters should decide whether the president should keep his job or not. Last thing, knowing what we know, impeach and acquit?

YORK: Yes. This is lining up kind of like the Clinton impeachment did. They impeached Clinton on December 19th, then the trial started on January 7th, ended on February 12th.