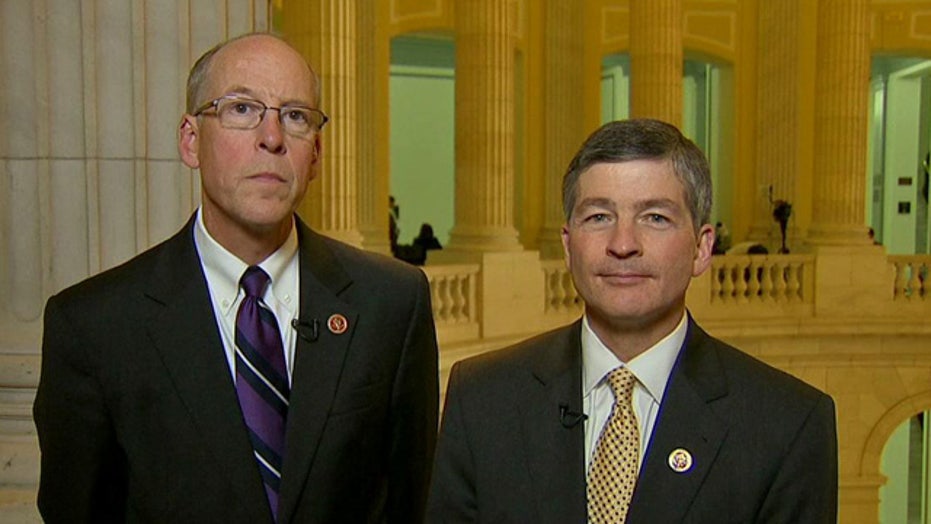 Reps. Walden, Hensarling hope discussion will lead to a negotiation

This is a rush transcript from "Hannity," October 10, 2013. This copy may not be in its final form and may be updated.

SEAN HANNITY, HOST: Earlier tonight, a group of 20 Republicans met face to face with President Obama at the White House. After the closed-door meeting was done, House Speaker John Boehner and other GOP lawmakers left without speaking to reporters. So what does this mean?

Joining me now, two of those lawmakers that were in the room, Texas congressman Jeb Hensarling and Oregon Congressman Greg Walden. Gentlemen, welcome to the program. Bring us inside.

REP. JEB HENSARLING, R-TEXAS: Well, I must admit, Sean, I've been in probably eight or nine meetings with the president. Relatively speaking, I would say this one was more constructive and useful.

You know, Congressman Walden, we actually have two reports. New York Times says "Obama rejects GOP offer of a short-term debt limit plan" because it doesn't deal with the government shutdown. Then we got a readout, the president said the meeting went well, lasted an hour- and-a-half, and after discussion about a path forward, no specific determination was made. So I'm...

HANNITY: Do I believe The New York Times or the office of the White House? You help me out. You were in the room.

Look, these are really serious times for our country because we have such a huge deficit problem and a huge spending problem. The economy's still on the rocks. It shouldn't have gotten to this kind of critical state before we were able to get a negotiation with the president. Would have been nicer to do sooner and avoid these kinds of crisis moments.

You know, this isn't a good way to operate. We all believe that way. But coming out of it, I think you are seeing some progress. At least the staffs and the leaders are going to be discussing into tonight, and we put everything else on hold at this point.

So I think there is a glimmer of hope here. But you know, the proof's going to be in what comes out of discussions that continue on into tonight.

HENSARLING: No, Sean. I don't think it -- no. This is a discussion that will, hopefully, lead to a negotiation. You know, I kind of remember my history about how long it took to negotiate, you know, the Vietnam war, where people talked about the size of the table or shape of the table for eight months. I hope it doesn't come down to that. So no, it wasn't a negotiation.

But let's face it, Sean, there hasn't been a lot of quality interaction between the White House and House Republicans, so it took a while for there to be some understanding about what each party was looking for.

But I've got to admit, Sean, I've been to a number of meetings with the president, where I left feeling that I was only lectured to. I thought I might be going to this meeting to hear for the umpteenth time that the president...

HANNITY: Were you lectured to?

HENSARLING: ... refuses to negotiate, so I didn't quite hear that, Sean. And so you know, what do I do as a congressman? I have -- I've always had high hopes, low expectations. At this moment, it's a little higher on the hopes. But it's not resolved. It is not resolved.

HENSARLING: And when you ask, who did most of the talking, well, quite honestly, the president does do a lot of the talking. But for our side, certainly, the speaker, the leader and our whip and Paul Ryan played a very critical role in the discussions, as well.

HANNITY: Well, no Republicans -- I would argue this is your fifth offer now, because it was defund, it was delay, it was eliminate exemptions, it was have a conference. The president's posture has been not even to talk to you guys. He'll -- he has time for the mullahs, though, in Iran. And now this...

WALDEN: No. I think by the end, by the end and only at the end, did we get to a point where maybe there was a better understanding from the president about what we were bringing to the table.

And you know, we're asking for an opportunity to negotiate, to sit down and have real serious discussion about this government of ours, its costs, its expenses, its programs, and how we get the economy on the right track.

So you know, I haven't been in as many meetings as Jeb has with the president. I felt a lot of the same pain he was feeling. But at the end, I do think we made slight progress here in the sense that we both agreed it was useful, and nobody said yes, nobody said no. And you know, given how slow things move and how long it's taken to get to this point with this president, I have to label you label it slight progress.

HANNITY: Yes. Let me ask you, Congressman Hensarling -- you know, Paul Ryan's op-ed has gotten a lot of play in The Wall Street Journal yesterday. And he sort of pivots in this op-ed, and talks about -- it seems like a "grand bargain," although I think he resisted calling it that, where he makes a pivot away from ObamaCare, which is the issue of the moment with the continuing resolution, And he starts talking about Social Security reform, Medicare reform, tax code reform, oil and gas and energy reform and making some structural changes.

Was mostly that discussed? Was anything about health care and exemptions discussed?

HENSARLING: Sean, again, it wasn't a negotiation. It was a discussion trying to lead to a negotiation. I don't think anybody expressly said that anything was off the table. And hopefully the president understands now that Republicans are never going to give up.

And I think, to some extent, he -- he acknowledged it. Republicans are not going to give up fighting ObamaCare. You know, every single day, I get a new correspondent from somebody in my district. You know, Congressman, you know, ObamaCare, it's costing me an extra $1,500. Congressman, ObamaCare, they just cut me back to 29 hours.

HENSARLING: But as we all know, the sad reality is, because 90 to 95 percent of ObamaCare is what we call automatic or entitlement spending, ultimately, as long as he's president, the only way to repeal or defund his signature law is with his signature.

But we're not going to give up. And we are always, always going to have that...

HANNITY: And I'll throw this at both of you, and you can answer at will. A lot of conservatives are concerned that Republicans are negotiating too much with themselves and that in the end, they may not hold the line, that the Democrats are united and the Democrats don't seem willing to give in any way.

Do you feel strong enough that -- Congressman Walden, that they are willing to hold the line...

HANNITY: ... that they're going to stand on their principles?

WALDEN: I'll tell you, Sean, I absolutely do. We know what it sounds like back home. We know the importance of the decision that's upon us as a country. And I think that's why you see the president finally agreeing to at least sit down and have a conversation that might lead to negotiation. He knows we're serious because we are because the problems are so serious. We have to do it and do it now.

HENSARLING: Absolutely. You know, Sean, you look at this freshman class, the class before -- I mean, these are people, you know, who left good jobs. You know, they're leaving their families back home because they care passionately about the cause of liberty, about free enterprise, about our values.

HENSARLING: That's what the Constitution says. And we will stay strong.

HANNITY: Hold the line. Appreciate it. Thanks for being with us.

WALDEN: You got it.