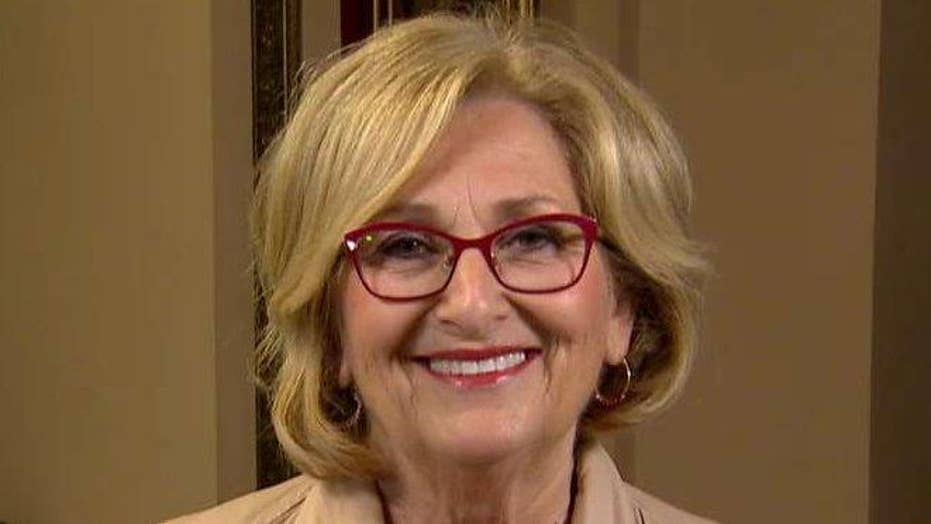 Rep. Diane Black speaks out on push to get economy moving

NEIL CAVUTO, HOST: All right, that meeting about an hour away now, the president's economic team that will include the treasury secretary, the head of the National Economic Council, and others, as well as the House Ways and Means chief, Kevin Brady, and a growing crowd that in about an hour from now is going to get an idea of the respective blueprint the administration has to cut taxes, in what would be major corporate tax reform, along with changes in the individual rates.

What's at stake and how this all sorts out, whether it could be paid for, all of that, to Tennessee Republican Congresswoman Diane Black. She's the chairman of the House Budget Committee, no doubt among those heading for this powwow as well.

Congresswoman, good to have you.

REP. DIANE BLACK, R-TENNESSEE: It's great to be with you today.

CAVUTO: Do you think -- I ask this of everyone I talk to on the Hill, Congresswoman, and if you will indulge me.

Do you think tax cuts have to be paid for right up top, right up front? Because the president doesn't think they should, that if they are big enough and they bring in, through dynamic accounting, big revenue, it's a moot point. They're going to -- you're not going to have to worry about that.

BLACK: Well, we always, on our committee, look for revenue-neutral. That is really what our goal is. We will be waiting to hear what the president has to say. We do really believe that when you cut those taxes -- and we know that from past history -- that you do see the economy grow.

CAVUTO: All right. So, you are a fan of keeping things revenue-neutral.

So, these are not. If the president and his White House team tell, with their blueprint, it will not be, near-term, is that a nonstarter to you?

Now part of that plan calls for big tax cuts across the board, a 15 percent corporate rate. Others are saying 20 percent. Regardless, from north of 35 percent, that would be a big drop. Do you think that's likely?

BLACK: I can tell you that I have been meeting with leaders all around the world, and I had one in my office from the U.K. just a couple of weeks ago. And I said your 20 percent is just eating our lunch. And he said, well, get ready, we're going down from there.

We know that it does make a difference. And so we're at 20. If the president can get to 15 percent and show us a way to do that, we're open to that conversation.

CAVUTO: When you say, show us a way to do that, what do you mean by that?

BLACK: Well, I want to know how he gets down to the 15 and where the cuts are going to be, exactly what he can show us as far as what his assumptions are on revenue growth as a result of that, and to get all of his assumptions.

CAVUTO: Do you think that you have to deliver this tax cut, Congresswoman, that after the stumbling start with trying to repeal, revamp the health care law, that this is a gotta, gotta, gotta do?

BLACK: I think it's a gotta do, because I have been here now for six-and- a-half years. We have been talking about it for that period of time.

We know that when you cut the taxes, you stimulate the economy. Look, we have had no more than 1.9 percent. And that's a high economic growth over the last six years that I have been here. We really need to get the economy moving.

You can't even stay steady unless have you 3 percent. And when you're down at less than 2 percent for the last six years, it's incumbent upon us to move. Plus, the tax code is very complicated, hasn't been reformed since 1986.

It's time that we do that, clean the tax code out, make it fairer, flatter and simpler.

CAVUTO: Do you think tax cut? There's a debate within your party, make it focused on the middle class. There are more in the middle class than obviously the rich, but that they don't need a tax cut. What do you say?

BLACK: Well, I think that when we look at the tax rates, we ought to be as fair as we can across the board.

And the whole idea behind this is to get the economy moving and get more investment in our economy, grows jobs.

When you say to 33 percent, it would be technically from the 39.6 percent. That's the top rate now. But that is what you are referring to?

I would be remiss, Congresswoman. I don't want to hit you with late- breaking news, but maybe you heard this, that a judge has blocked President Trump's bid to cut funding to sanctuary cities.

What do you make of that and how judges might now intervene in the president's attempt to rein in on those cities and states that try to have a hands-off policy with illegals?

BLACK: I think it's very disappointing when the court does that. I haven't seen in this late-breaking news.

But I can tell you that I think it's very dangerous to say that when we have a national security issue and these states, counties, cities that have made that decision are still taking government funding and getting government funding, I think there has got to be a way that you hold them accountable for making sure that this nation is secure.

CAVUTO: Congresswoman, thank you for taking the time.

CAVUTO: I didn't want to just dump that on you there, but that did break.

CAVUTO: We appreciate it.