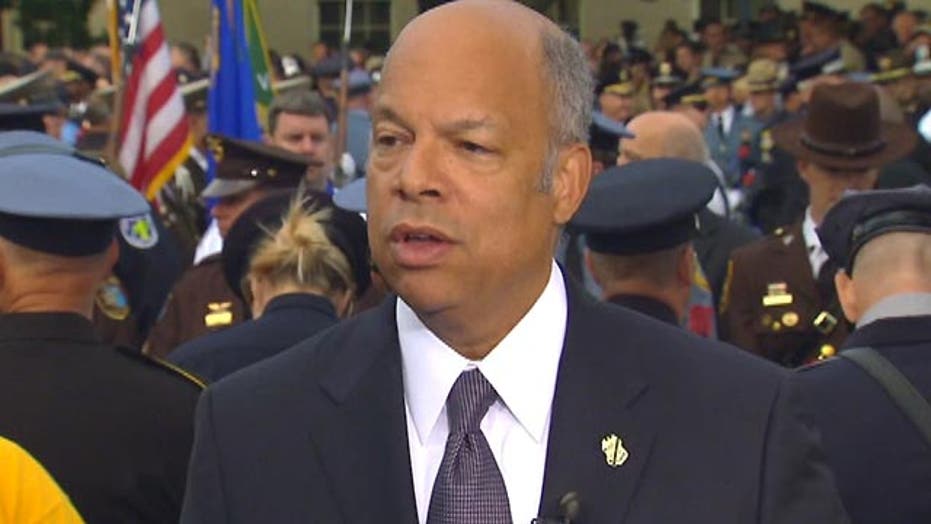 How do we fight lone-wolf terrorists in America?

This is a rush transcript from "On the Record," May 13, 2015. This copy may not be in its final form and may be updated.

Each has been killed in the line of duty dating back to the first known death in 1791. In just the year 2014, 51 officers died. We are back now with U.S. Secretary of Homeland Security Jeh Johnson. Sir, last week, you were up in New York. An officer was slain.

JEH JOHNSON, SECRETARY OF HOMELAND SECURITY: Yes. Officer Brian Moore. I was in New York and I decided to go out to Long Island to his wake and it is kind of what I was saying before. Any time you go to a cop's wake or right after -- the precinct after a shooting, they are all there they all show up.

It's like a big family. It was quite moving. Officer Moore was not married. He was only 25. I understand he had something like 10 police officers in his family including his dad. He was an officer's officer.

SUSTEREN: You know, it's tough tonight to look at the families as they get off the buses because they are coming to honor the mothers and fathers and other relatives who have died. It's very sad to see their loss.

SUSTEREN: You know, many police are saying to me tonight the feelings are bruised. They are feeling a little bit like the American people don't quite understand the difficulty of their jobs.

JOHNSON: Well, I think it's important to remember that a police officer, a federal law enforcement officer is public safety. They are there to on a moment's notice to protect our lives, potentially risk their own lives for somebody they don't even know. And they do that every single day. Whether living or our fallen, it's heroes that we're honoring here today.

SUSTEREN: We just think about last night when that train crashed. Maybe some were supposed to be off duty, ready to go. They don't ask anything. They just go.

JOHNSON: They don't ask anything. As you know they don't get lavish pay, but they are prepared to put their lives on the line at a moment's notice.

SUSTEREN: Which brings me the other issue of ISIS in this country because our front line of defense for ISIS many times is the police officer, law enforcement. They are the ones who are called out to fight or the FBI or any law enforcement.

JOHNSON: That's becoming more and more the case given how the global terrorist threat is evolving. That is correct.

SUSTEREN: What do you say to them?

JOHNSON: Be vigilant. Be aware. Be ready. And in the Department of Homeland Security, what we're doing more and more is what we call vertical information sharing, vertical intelligence sharing with state and local law enforcement.

Director Comey and I had a video teleconference with police chiefs across the country last week to share with them the picture they are seeing. We think that's more and more important.

SUSTEREN: What about the other day talking about the lone wolf. How do the police even begin to fight that lone wolf and factor in the Internet where you have people who do the unthinkable that become recruited for ISIS and they want to act alone here in the United States? How do you possibly fight against that?

JOHNSON: It very definitely presents a more challenging picture because of the prospect of an independent actor who is not recruited overseas, not trained overseas, doesn't accept orders overseas and comes to this country.

We have systems in place to try to track that but, if it's somebody who simply inspired by something they read on social media or in the internet and decides to commit an act of violence on their own, that's much harder detect.

And what I have been saying is that very often the cop on the beat may be the first one to actually find out about a potential terrorist attack, but the overall message that I think is important to convey is that we are continuing to urge the public to come to events like this, large public gatherings.

No one should be running and hiding in a free society where we have the right to associate, the right to travel. We want to continue to encourage the American public to come to large public events like this, to honor our fallen heroes.

We had VE day celebrations last weekend, thousands of people on the mall. It's important to continue to encourage the public to come to events like this.

SUSTEREN: Some communities feel that they are not getting a fair shake from the police.

JOHNSON: Well, that is something that is a continuing challenge. I believe that our law enforcement community is incredibly strong, incredibly resilient. It knows how to learn from lessons of the past and we'll move on. You can't have a community without public safety we move often and learn from lessons. Tonight, we honor our fallen heroes.

SUSTEREN: You are going to speak to them and honor them. I should tell you right over your soldier another bus has arrived with more family members. It seems endless how many relatives. It's just endless.

JOHNSON: You will see thousands of people out here tonight. It's a remarkable ceremony. I remember from last year this is one of the more moving things I did as secretary of Homeland Security. So I'm pleased to be back here to give an address.

SUSTEREN: It's fun to see them in uniform. They look very proud, don't they? Those police officers and they should be proud.

JOHNSON: I just have a great time looking at the patches to find out where people are from and then eventually I find somebody from my hometown out here.

SUSTEREN: OK, if there are any police officers in Montclair, New Jersey, watching he is looking for you. Anyway, Mr. Secretary, thanks very much and good luck in your speech tonight. Thank you, sir.