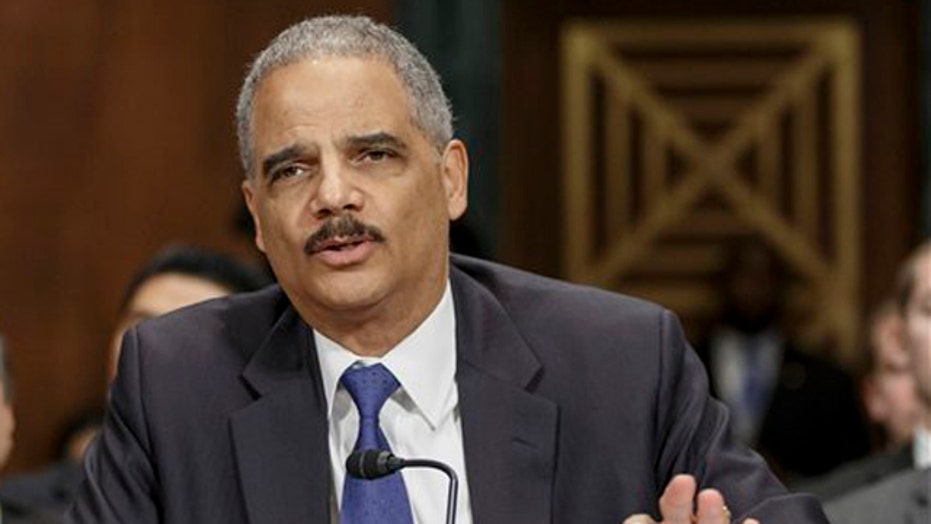 Admin under fire for unprecedented approach for writing its own laws

This is a rush transcript from "The Kelly File," February 25, 2014. This copy may not be in its final form and may be updated.

For weeks we have tracked the growing controversy as the Obama administration comes under fire from both liberal and conservative legal scholars concerned about what is being called a lawless presidency, extending its power well past what the Constitution allows.

Republican Congressman Tom Rice is set to testify tomorrow at a House hearing on the president's recent rash of executive actions. But we begin with Jonathan Turley who is a constitutional attorney and a professor at the George Washington University Law School and a supporter, somebody who voted for President Obama.

Professor Turley, this is quite something. Under Republican administrations and Democratic administrations, attorneys general have decided in rare instances not to defend a law on the books. But to then pull in the states' attorneys generals and say, and you should consider doing it, too. In particular, the question is, on gay marriage, whether this is a bridge too far for Eric Holder. Your thoughts.

The problem is not giving advice, but the specific advice that he's giving. You know, many of us were troubled by the role of Attorney General Holder and the administration in the last challenge that ended up from the Supreme Court involving DOMA, the Defense against Marriage Act. Essentially the administration left that litigation in midstream and refused to defend the federal law. And it created a pileup in the courts. It was not clear who could defend the law. And the same thing happened with the sister case from California, Hollingsworth, where ultimately the court found that there wasn't standing to be heard in front of the Supreme Court.

That's the price of this tactic, if you withdraw your defense from these -- of these laws as attorney general, there may not be someone there who can advance the case.

TURLEY: That's what's so troubling. Because, you know, I happen to agree with the president in this area, but I did not agree with how they handled DOMA and these cases. I think that as lawyers, we have first and foremost an obligation to the legal process. We should have a full and fair hearing of these issues. There's good faith arguments on both sides.

TURLEY: I just don't agree with one side.

KELLY: But Eric Holder is saying, and he said it at the federal level -- what was unusual about what he did at the federal level when he chose not to defend the Defense of Marriage Act was, he had been defending it for a year and a half, and then suddenly he went in and said, there is no good faith basis on which this could be defended. And that was unusual, because he had just been defending it for a year and a half. And now all these state A.G.'s have been defending a law that has been passed on their books by their constituents, signed into law by their governors, and now he's sort of with the wink and the nod saying to them, maybe you guys don't have a good faith basis to defend those laws, which were duly passed by electorates.

TURLEY: That's right. And what people need to remember is that attorney generals assert the absolute right to be the sole defender of these laws. So, when they leave, when they are sort of absent without leave, there's no one there.

I thought what Holder's mistake was -- and this is why I think his advice was bad today -- is that he didn't create a substitute, somebody that would guarantee a full and fair hearing. He was just saying, you know, pull the ladder up behind you. And that's a serious problem for the separation of powers. You know, DOMA was duly enacted by Congress, and signed by Bill Clinton. And this is a problem that Congress is facing. I'll be testifying tomorrow at the same hearing as the congressman, and this is one of the issues we're going to have to deal with. Because it is a serious problem, when someone says, I alone can defend statutes as the representative of the United States. And then he's just not there to do it.

KELLY: And I declare that this statute is indefensible and I don't care what the people of my state have said or what the governor signed into law. And in many of these states, the attorney general is of a different party than the sitting governor, so you can see some politics may find their way into it.

Professor Turley, we look forward to hearing your testimony tomorrow.

KELLY: And so, he, you heard, is going to testify on Capitol Hill about these power grabs, we've been watching at an executive level. The president's use of executive orders and executive action has really caused a lot of consternation in the country from the left as you saw with Professor Turley and the right.

And Congressman Tom Rice is a Republican out of South Carolina and author of a resolution titled, quote, "Stop this overreaching presidency." It's pithy. He's being called --

KELLY: Good to see you, sir. So, Professor Turley is going to go and he's going to talk to Democrats in particular, and try to urge them to find a way to challenge this president. Now we see it, not just at the presidential level, but even at the attorney general level. I mean, it's -- hey, I know that the state legislatures pass laws and the Republican governors or their Democratic governors sign them into law. But I as the attorney general and we as the attorneys general will tell you which laws are good and which laws are bad, and you know, to hell with you if you don't like it.

RICE: Well, Megyn, that's what our "S.T.O.P. Resolution" is all about. Article II, section three of the Constitution in my opinion is pretty clear that the president shall take care to faithfully execute the laws of the land. The president doesn't have the right under the constitution to pick and choose what laws or parts of laws he's going to enforce or who he's going to enforce them against. And our president has shown a pattern of doing this over and over again, particularly with the Affordable Care Act.

KELLY: So, Representative Tom Rice -- so, my question to you, though, is what are you going to do? Because we had Professor Turley on the program before who has said repeatedly, the problem is, how do you force people to abide -- people in the White House. I mean, the president, the attorney general, how do you force them to abide by the Constitution and limit their own powers?

RICE: Well, Article II -- excuse me, the "S.T.O.P. Resolution" House Resolution 442, if the passed by the majority of the House of Representatives only, would -- the House as an institution would bring a lawsuit against the president to enforce his obligation into the Constitution.

KELLY: OK. So, you try to get a judge to declare that the president has done too much?

RICE: If the judge finds the pesident's actions unconstitutional, then those actions will be null and void. So, the --

KELLY: You need somebody to enforce it, who would that be? Someone who works for the president.

RICE: Well, if the president -- if the court finds that the president's actions are unconstitutional, then I guess Congress could go further. But initially, what we have to determine -- you know, nobody argues with the president that has any discretion, right? Everybody knows the president's got some discretion. But here, particularly in the area of the Affordable Care Act, when he delays the employer mandate for now for two years. You know, I'm a tax lawyer, a CPA. The Supreme Court has ruled in holding the Affordable Care Act constitutional, that these mandates were attacks. Right? The president has no right to delay a tax. He has no right to say that this group of people doesn't have to pay the tax.

KELLY: Well, we have established the controversy over those behaviors, but we have not established the path forward for lawmakers like you who want to challenge them. I think it's interesting you're looking into it. And even the Democrats are starting to pay attention.

RICE: So, for example, all the employer mandate.

KELLY: I have to go, so quickly.

RICE: If the Supreme Court rules that his decision was unconstitutional, that mandate will apply retroactively.

KELLY: We shall see.

We're interested to watch on what happens on Capitol Hill as you hold the hearing tomorrow. Sir, thanks for being here.