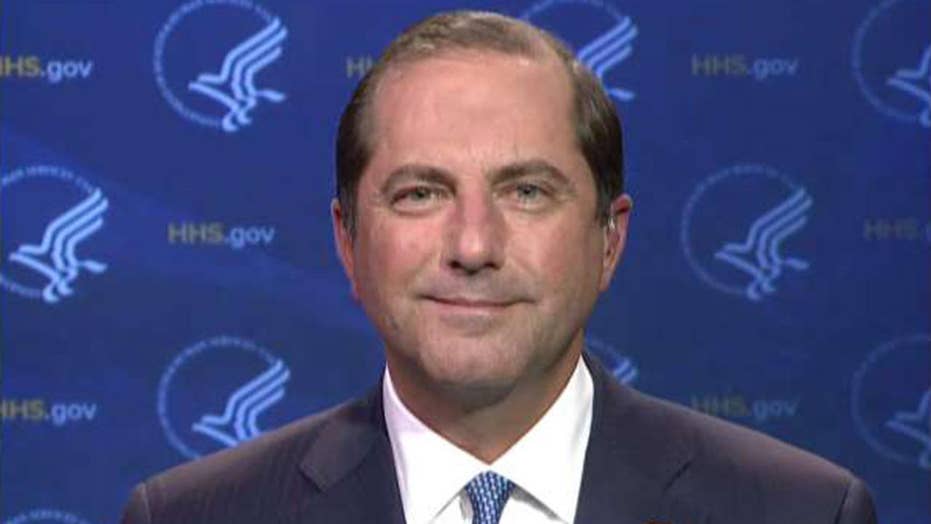 This is a rush transcript from "Special Report with Bret Baier," July 31, 2019. This copy may not be in its final form and may be updated.

BRET BAIER, ANCHOR: President Trump wants to set up a system to allow Americans to legally and safely import prescription drugs from Canada. It's a move, the powerful U.S. pharmaceutical industry has fought tooth and nail for decades. Let's talk about what it all means and what could happen tonight with Health and Human Services Secretary, Alex Azar. Mr. Secretary, thanks for being here.

HEALTH AND HUMAN SERVICES SECRETARY ALEX AZAR: Good to be with you, Brett. Thank you.

BAIER: Can you explain this program, the Safe Importation Action Plan?

AZAR: Absolutely. So, President Trump has heard the American people. They want to pay less for drugs. And he's been delivering results over the last two and half years. We've seen drug price inflation go down for the first time in over 50 years. But that's not enough.

He has asked us and we today launched a plan that will allow states, pharmacies and wholesale distributors to come in with plans to us where they could assure that they'd get drugs from the same factories that make the American drugs, but get labeled for Canada, get those drugs, keep them under FDA, FDA regulation, keep them safe, get them into this country and allow them to be sold at discounts for American consumers.

So, we've laid out for the first time in history a pathway where you could actually get Canadian drugs here in the United States in a safe way and reduce cost. So, it's really historic, historic move today.

BAIER: This is a big, big issue on the campaign trail. Just last night at the debate, it was a big topic for Democrats. Take a listen.

WARREN: It works great for those who can hire armies of lobbyists and lawyers.

SANDERS: I took 50 people with diabetes from Detroit a few miles into Canada, and we bought insulin for one tenth the price being charged by the crooks who run the pharmaceutical industry in America today.

BAIER: So, are they wrong?

AZAR: President Trump is the first President, Republican or Democrat, who has ever had the courage to take on the pharmaceutical industry and the vested interests of the status quo to open the door to safe importation of drugs from Canada. As I just laid out, this is the first time this has ever happened. And it's because he is fighting for the American people. The American people want their drug prices down.

They're sick and tired of the fact that we overpay in the United States so that the socialist systems like Canada get propped up by underpaying. And he's going to level that end this foreign free riding sector.

BAIER: Mr. Secretary, your critics would say that as you were the President of Eli Lilly, you were the head of one of these big pharmaceutical companies that during that time saw the tripling of insulin prices. How are you, the guy to spearhead this effort?

We can break through the orthodoxies then the talking points that said for so long, it's unsafe. It can't be done safely. It can't result in savings to consumers. And instead, we can open the door for states, for pharmacies and for wholesale distributors to come in with plans to actually make this work for the benefit of the American people.

BAIER: You know, it's not just the Democratic candidates who have been talking about the pharmaceutical industry in a negative way. Here's President Trump in May of last year.

BAIER: So again, you were the head of one of these companies. Is he right? And can the industry change?

AZAR: He's right that they spend a fortune on lobbying, and they certainly spend a fortune running T.V. ads attacking me constantly for the effort that the president and I are leading to tackle the status quo, because we are going to be undeterred in efforts to get lower drug prices for the American people.

Listen, they've got a good gig going. They're making a lot of money. They're not going to want that system disruptive. The president wants an innovative pharmaceutical system here in the United States. The president wants more research and development. We want the therapies of tomorrow.
But we are getting a raw deal on that now. There's fair compensation. We can set up systems where we ensure that were not just getting a bill and paying it, but actually negotiating, getting fair, competitive, free market values for that.

The simple fact is we don't have a free market right now for drug pricing in the United States. When they simply hand you a bill and you pay it, that's not a free market. You actually need to build systems where you actually negotiate, you have competition. And that's what President Trump is doing. We're not talking about doing anything that would hurt this industry in any fundamental way, but we are talking about making sure the patient is in the driver's seat, the patient has access and choice and competition.