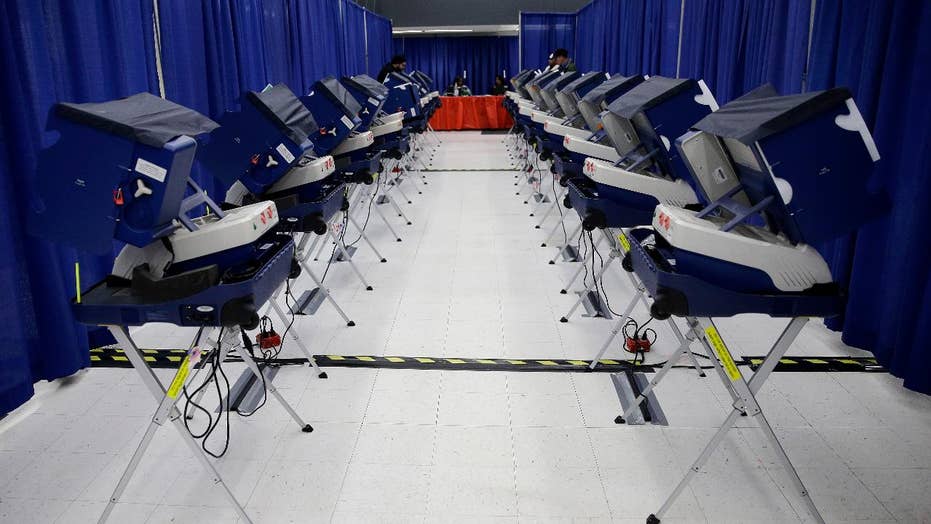 This is a rush transcript from "Special Report with Bret Baier," October 31, 2018. This copy may not be in its final form and may be updated.

BRET BAIER, ANCHOR: This is a Fox News alert: President Trump arriving in Fort Myers, Florida, waving to the crowd, just got off Air Force One there. You see Governor Rick Scott of Florida who is running for Senate there and Air Force One. The pool is now racing to their car to get in the motorcade to follow him to this event in Fort Myers.

This is a final campaign blitz. The president is going to be traveling to 11 cities in eight states over the next six days. Do the math here. And you can see all the places he is going. He's actually going to states that he won in 2016, many of them he won by a lot. And he is trying to shore up not only House races but Senate races and, in some cases, governor's race is like in Florida with the case of Ron DeSantis, who is running for governor against Mayor Gillum from Tallahassee.

OK, Mollie, first, the president and how much he factors in. We have new Fox polls out tonight, and this is the president's job approval performance in these states. Number six, North Dakota, Tennessee, Missouri, Arizona, and Indiana. Look at the approval numbers in North Dakota and Tennessee. Both races where Republicans are pulling away in that Senate race. He is on the ballot, as he said, in a lot of these places.

MOLLIE HEMINGWAY, THE FEDERALIST: And it certainly helps the Republicans that he is above water in this favorability testing. You mentioned North Dakota where he is ahead, that race looks like it's done. Tennessee looks like it's a done. The Missouri race and the Arizona race, which you have as tied, that's got to be troubling, or at least it shows Republicans have a strong chance of taking those seats. If Claire McCaskill is tied at this point in the race in a state that Donald Trump took by a large margin and she's been campaigning very hard, but not to be above her opponent there is probably not where she wants to be at this point in the race.

BAIER: And there is that race, 43-43. The other one you mentioned was Arizona, and we have that at 46-46, Kyrsten Sinema and Martha McSally. I guess Arizona and Nevada are where Democrats are seeing a lot of a hope, A.B.

A.B. STODDARD, REAL CLEAR POLITICS: Right, but those raises are still so close. It's been looking good for Senator Heller, the incumbent, until this last poll out today in Nevada, where Congresswoman Rosen is ahead. That's been a big surprise and a disappointment to Democrats. That without Latinos is not so much of a purple state. So do Latinos vote in the midterms? Not usually. Is the Harry Reid infrastructure left over from when he last won there? That was really an impressive operation he put together. Is that going to be activated against Heller? I wouldn't be confident if I were the Democrats there. And Arizona I think is going to be the closest race of the night.

BAIER: In Arizona, Hugo, they have early voting, and they are seeing tremendous numbers, really high. Across the country, 40 percent of the people will have voted already by Election Day. And Republicans in state by state are performing pretty well in the early vote.

HUGO GURDON, THE WASHINGTON EXAMINER: They certainly are. And I think this is going to be very encouraging to the Republicans. Normally, early voting has been something about which more Republicans had expressed skepticism. Democrats, it's been very popular amongst Democrats. To see Republicans performing well, and as you say, it's across the country, in the early voting is obviously going to be cheering Republicans already.

BAIER: On the issue of health care, we just ran that piece. Take a listen to the president and Joe Biden and Bernie Sanders.

FORMER VICE PRESIDENT JOE BIDEN: The president is saying, we Republicans, we strongly support making sure that preexisting conditions are covered! Lie.

SEN. BERNIE SANDERS, I-VT.: How the hill hell does it happen that we spend twice as much per capita on health care as do the people of any other nation?

BAIER: The Kavanaugh situation changed the dynamic. It seems like across the board, Democrats are really hitting health care as much or more than Republicans hit it when Obamacare was at its early stages?

HEMINGWAY: You can tell a lot by what actually motivates voters by what is happening in the ads, and you see Democratic ads really focusing on health care and Republicans trying to also focus on health care. Medicare for all, or free health care always is going to poll pretty well because people generally like free goodies from the government. It goes less well when you actually have the political considerations. When you look at that really huge red wave you saw an 2010, that was a response to that test of whether the government should take over a massive part of the economy in the health care scenario. So it's a complicated thing, but certainly effective political messaging at the end. And it is interesting what people are focusing on and what they're not.

STODDARD: Democrats have focused on health care all along. Republicans promised again and again and again for cycle after cycle to repeal and replace it, and they couldn't. They didn't improve it. They got rid of the individual mandate in their tax law this year. That has made the pool sicker and the coverage more expensive. People know Republicans did not come up with an answer on this. They know the president is not telling the truth. This has been an issue in their ads for Democrats the entire campaign. Not impeachment, not immigration. Health care. It is the sleeper issue Republicans are panicked about it. If they take the House back, it will be because of health care.

BAIER: Hugo, I asked each of you to pick a race. Which race did you pay?

GURDON: I picked West Virginia, and that might surprise some people, because the likelihood, the almost certainty is that Joe Manchin will win. The reason why West Virginia is interesting is that it was won massively by President Trump, and at the moment the Real Clear Politics average puts Manchin ahead by 12 points. But if that falls into single figures, it could suggest that Republicans have a great chance in the states that President Trump won in 2016. That could mean Florida, it could mean Indiana, it could mean Arizona, and Missouri.

BAIER: He's going to Huntington, West Virginia, and we don't have the number here but we assume his approval rating is much like North Dakota, which has the president at 61 percent approval in North Dakota. OK, Mollie, your race?

HEMINGWAY: I chose California 39. This is an open seat and it's one of many that will be key to the Democrats actually retaking the House if they are able to do that. What's interesting about this is had Ed Royce not vacated this seat or announced he wasn't going to run again, almost certainly he would have kept it. It's now a toss-up.

BAIER: It is shifting. Because of the House suburban district, a lot of the toss-ups we have leaning a little bit more Democratic now, so they are close to the 218 number. A.B.?

STODDARD: I chose the Arizona Senate race, and at Real Clear Politics we now have that with all the new polling down to 0.8 percent lead for Sinema, so not a good one.

BAIER: And we have a tie.

STODDARD: And you have it tied. So this, like I said, I think this could be the closest election of the night. I think this race is so fascinating, these two women are both moderates. McSally, an Air Force pilot, colonel in the Air Force is not running as a moderate. She chose not to. Republicans in Arizona are no longer the Republicans of John McCain or Jeff Flake. And so she's running harder to the right, while Sinema has told independent voters I'm for border security, I'm not a liberal, I'm not proud Democrat, and she has run as a moderate.

They are both incredibly ambitious people. Sinema has these controversial statements in the past which I think could end up depressing independent vote, but she is way up with independents, and that could be key to her victory.

BAIER: What's interesting is the ads are trying to point each other as extremes.

STODDARD: They call each other liars and treasonous. It's been as ugly as it gets.

HEMINGWAY: McSally said that saying it's OK to work for the Taliban against U.S. is not something you should do. I don't think that --

STODDARD: Right. I'm just saying they are both members of that bipartisan House problem solvers caucus and they're at each other's throats. It's as ugly as it could have gotten, and, again, so interesting that they are actually moderates. But one of them chose not to run as one. It will be interesting to see what happens as a result of that.

BAIER: The president is not stopping in Arizona on his final trek. So we'll see.