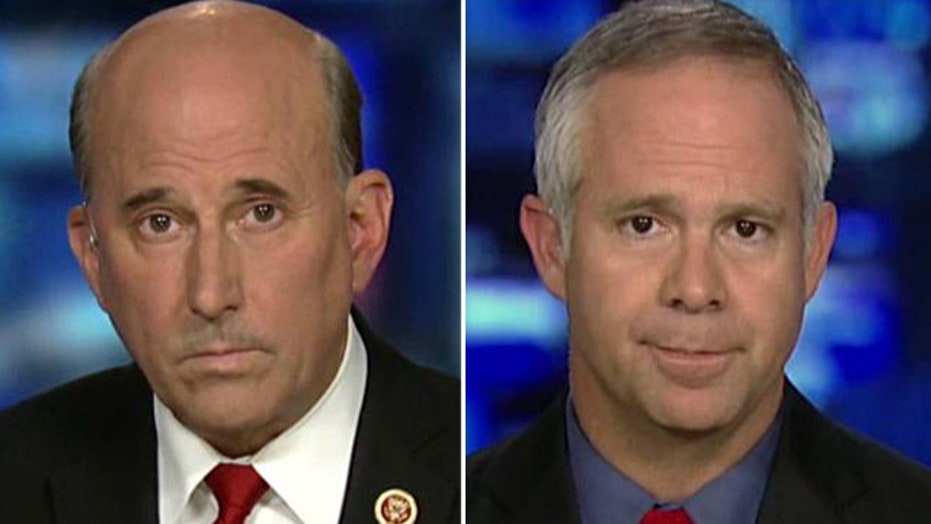 Tea Party Republicans won the battle, but lost the war?

This is a rush transcript from "The Kelly File," October 15, 2013. This copy may not be in its final form and may be updated.

MEGYN KELLY, HOST: Breaking tonight, the attempt in the U.S. House to pass a more Tea Party-friendly deal on the spending and debt ceiling is now scuttled. That deal was not friendly enough, apparently, to the Tea Party caucus. And now the process is in the control of a more moderate U.S. Senate.

So, did the Tea Party win or lose here? Two very outspoken Republican congressmen, friendly with the Tea Party, are with me now, Louis Gohmert of Texas and Tim Huelskamp of Kansas.

Congressman, thank you both so much for being here. And so, I ask you, you know, is it sort of you won the battle but you lost the war? Congressman Huelskamp, I'll start with you.

REP. TIM HUELSKAMP, R-KAN.: Well, there are a lot of those questions. I never thought the president could have made ObamaCare worse, but they have succeeded to do that in recent days. And with their deal, they have exempted big businesses, they've exempted themselves. And now they're going to try to pass something that exempted labor unions. And I thought this would be an issue in next year's election for Democrats, but for Republicans that are helping this out in the Senate, it's going to be a primary issue, as well because ObamaCare is not supported --

KELLY: Wait, but let me just interrupt you, sir. I understand and I think the viewers are well up to speed on the problems with ObamaCare. But the question is, I mean, tonight we're talking about strategy and whether it failed. Because I get what you were trying to do, the viewers get what you were trying to do, take a principled stand. But the question is whether you hurt the Republican Party and the American people are now going to wind up with, you know, the deficit, I mean, the credit card is going to get raised, the debt limit is going to get raised. The government is going to resume, the funding is going to resume with no conditions. That is what Harry Reid wanted.

HUELSKAMP: Well, Megyn, the deal that we were offered today would have done all of those things with the Republicans being the once promoting that to the House, raise the debt ceiling another $300 billion, let ObamaCare kick in on January 1st, and that is why we said no, we oppose ObamaCare, we opposed these exemptions, let's pass something pretty simple. But I tell you, we don't have help from any Senate Republicans, and they're working together with Harry Reid now to continue with implementation of ObamaCare.

KELLY: Representative Gohmert, what do you make of it, just even knowing that the end result you would wind up with, the American people would wind up, was worse to you than what you were pushing for, why did you feel it was nonetheless worth pushing for?

REP. LOUIE GOHMERT, R-TEXAS: Megyn, there is no statute of limitations on doing what is right. And I heard Brit talking about, you know, we were bothered by the march of the progressive left or whatever. But the fact is, when Nancy Pelosi had all of those children gather around her, they were supposed to be less than 12, even today they were not of legal consent age.

And so, what we've done is we have stolen from those children. We went from $160 billion deficit spending in Bush's last year to $1.6 trillion the following year, stealing from those children but we legalized it. And Obama took away the right to choose, doctors rights to decide what treatments, and so we've said, the least we can do is say all right, Mr. President, you illegally told businesses we would waive the mandatory requirement for them. All we're asking -- and I was e-mailing right before. I don't think all is lost if we have leaders that will stand up and do the right thing. All right, listen, raise the debt ceiling, extend the CR, except demand, force the Senate to take this vote that we will suspend the individual mandate as the president illegally did for businesses, and force them to take a vote.

Megyn, how is it right for Harry Reid to say, no, no, no, no on all of our bills, including the one that just said appoint conferees, negotiators. He wouldn't even do that.

GOHMERT: And so, let's make them take a vote.

KELLY: Let me ask you this. When I listen to both of you, I feel, I hear your frustration. I mean, it just sounds like you have had it, much like Senator Cruz, and you don't really care if you take a hit politically or if you get bad press by those who say, oh, you have divided the Republican Party. Your position seems to be, we had to take a stand.

HUELSKAMP: Well, Megyn, what I hear from folks who may not like our position and the clash in Washington, D.C. continues to push back, it is the folks that were exempted. Big businesses are saying, why do you care about ObamaCare, we got taken care of. Unions are going to say the same thing comes tomorrow.

GOHMERT: I know that is one contention, but if Ted doesn't suspend the filibuster, if we don't like this to focus -- we had already heard what was coming. As soon as we got beyond this summer, we were going to have an amnesty bill come to the floor. That is what we would have been talking about, and that is where the pivot would have been if we had not focused America on ObamaCare.

And so, I don't think it is too late and I think that we could force the Senate. But to do that you have to have real leadership that says no, Harry Reid, you've told us no, no, no, and not made a counter offer over and over, so here is our offer --

KELLY: I have to go.

GOHMERT: All we're asking is treat individuals fairly, vote on it. Let your people vote and then we'll take up your offer after that.

KELLY: Before I go, before I go, if the Senate passes this deal and it comes back to the House and Speaker Boehner allows it to go to the floor and it passes with all Democrats and some more moderate Republican support, do you believe Speaker Boehner's speakership is over? Mr. Gohmert, you first, quickly.

GOHMERT: I have heard so many people say that if Speaker Boehner does this, that or the other, he is over, he's out. And if you remember, I was the only one that nominated somebody else last November and was by myself. In January, we had 13. I would be surprised to see enough stand up.

KELLY: I'll finish with you quickly.

HUELSKAMP: I do doubt that that would happen. But at the end of the day, there is a political reality for red state Democrats and Republicans who at home say they're opposed to ObamaCare and then today, they are negotiating to extent it on, probably permanently. And that is not good enough. America needs better, and we need to do something about the long term debt and deficits, particularly because ObamaCare will blow the debts up even more.

KELLY: And that's not on the table, nobody is even discussing in particular entitlement spending. I got to go, gentlemen. You're good to come on.

GOHMERT: On the deficit, that we have a president that was threatening to default when the money was there. That had to be in Fitch's calculations.

KELLY: Thank you so much, sirs. All the best to you.

GOHMERT: Thanks, Megyn, really appreciate it. I love your show.

KELLY: Thank you very much.