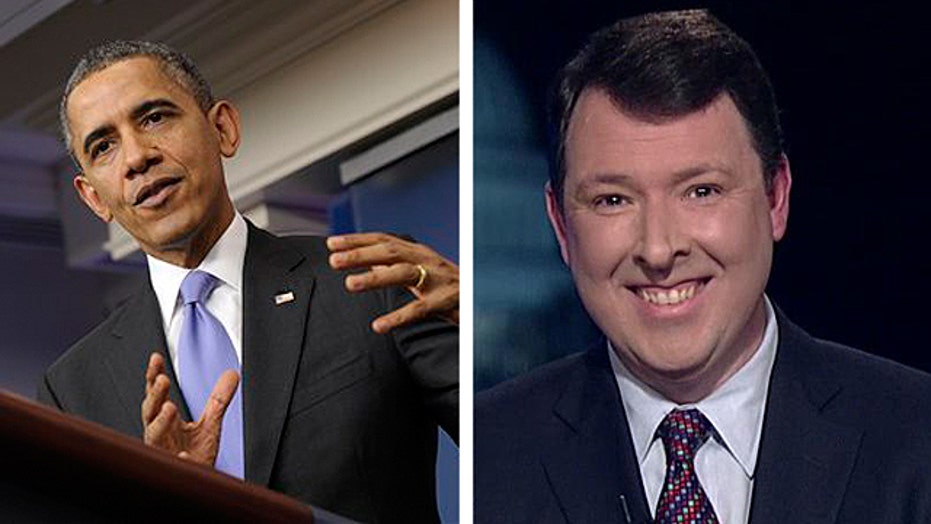 Have Americans lost confidence in the health care law?

This is a rush transcript from "The Kelly File," December 10, 2013. This copy may not be in its final form and may be updated.

MEGYN KELLY, HOST: And just about 72 hours to go now before the next big ObamaCare deadline to buy insurance or go uncovered in 2014. And tonight the president is taking heat for changing the rules yet again. Welcome to "The Kelly File," everyone. I'm Megyn Kelly. We first told you last night about this 11th hour change to the president's signature legislative achievement giving some Americans who had their insurance canceled, thanks to ObamaCare and exemption from the so-called individual mandate. The penalty, the tax. That's at least the third major ObamaCare delay this month alone. All done by presidential proclamation. All done without Congressional approval. And now the press corps is asking the president how Americans can have confidence in this law if the chief executive keeps changing it. Watch.

ED HENRY, FOX NEWS CHIEF WHITE HOUSE CORRESPONDENT: You talk about the issues with health care and the website rollout but there have been other issues, the misinformation about people keeping their policies, the extended deadlines, the postponements, we have a new waiver that HHS announced last night. How do you expect Americans to have confidence and certainty in this law if you keep changing it?

PRESIDENT BARACK OBAMA: I have said before this is a messy process. And I think sometimes when I say that people say, well, A, yes, it's real messy and, B, isn't the fact that it's been so messy some indication that there are more fundamental problems with the law. And I guess what I would say to that, Chuck, is when you try to do something this big affecting this many people it's going to be hard.

KELLY: Marc Thiessen is a fellow at the American Enterprise Institute and a former speech writer for President George W. Bush, also a columnist for the Washington Post. Marc, and so the president came out today and said these are changes but they don't go to the core of the law. And you know, things get messy when you try to mess with one-sixth of the U.S. economy. Your thoughts?

MARC THIESSEN, AMERICAN ENTERPRISE INSTITUTE FELLOW: I think he just explained it right there. When big government sticks its nose into one-sixth of the economy it creates a huge mess. I mean, look, Chuck Todd asked a great question. There have been something like 14 different unilateral changes to ObamaCare since in this year alone. I mean, they delayed the employer mandate for a year. They changed the deadline for the individual mandate because they didn't know what was in the law. They announced this grace period for people with canceled plans which was then promptly rejected by half the states because he didn't have the authority to do it. Then they delayed the rollout of the website for employer base - -

KELLY: My head is swimming. I know you could go on.

THIESSEN: And it goes on and on and on. But the problem is -- exactly. Our heads are spinning. And the heads of the American people are spinning. And so what's happening is, every time they do one of these changes, they are throwing the insurance market into turmoil. Because they have to plan for these things. But two, they are devastating confidence in the basic competence not just of their administration but of government itself which is devastating for the liberal project.

KELLY: That's already seeing some of that, in the polling.

KELLY: Gallup had a poll this week that showed that 72 percent of those polled believed that the biggest threat to the United States in our future will be big government and a significant number of that Marc, significant numbers of Democrats believe that.

THIESSEN: No. That's exactly right. When Barack Obama took office, it was 55 percent thought that. Today, 72 percent. That's three of four Americans. That is the largest number in 50 years of polling by Gallup. And there is been since Barack Obama took office, there has been a 24-point increase in the number of Democrats who say that big government is the biggest threat to our country.

KELLY: Put that back on the board if you would.

THIESSEN: That's exactly right. And it started out 32 when he took office. So, it's gone up 24 points. So, I mean, when you have a situation where the majority of Democrats believe that the big government is the biggest threat to the country, the liberal cause is losing. I mean, this is devastating for them. Because people are looking at this and saying, hmm, you know, this is what happens when big government sticks its nose in one-sixth of the economy and maybe the government isn't such a good idea. So this ObamaCare may be actually the worst thing to happen in to liberalism in the history of the ideology.

THIESSEN: Yes, you know, they keep saying that the website is the problem. It's like that scene in the movie "The Jerk" with Steve Martin when he's at the gas station attendant and sniper shooting at the gas cans. And he says, "He hates these cans." No, he didn't hate the cans, they are trying to kill you. It's not the website, it's the law, it's the fact that millions of people are losing their insurance. It's the fact that 50 million people, I mean, are they going to give this exemption to 50 million people on the employer-based plans lose their health care next year?

THIESSEN: I mean, this is never ending.

KELLY: And this paddle game. And that's all I need.