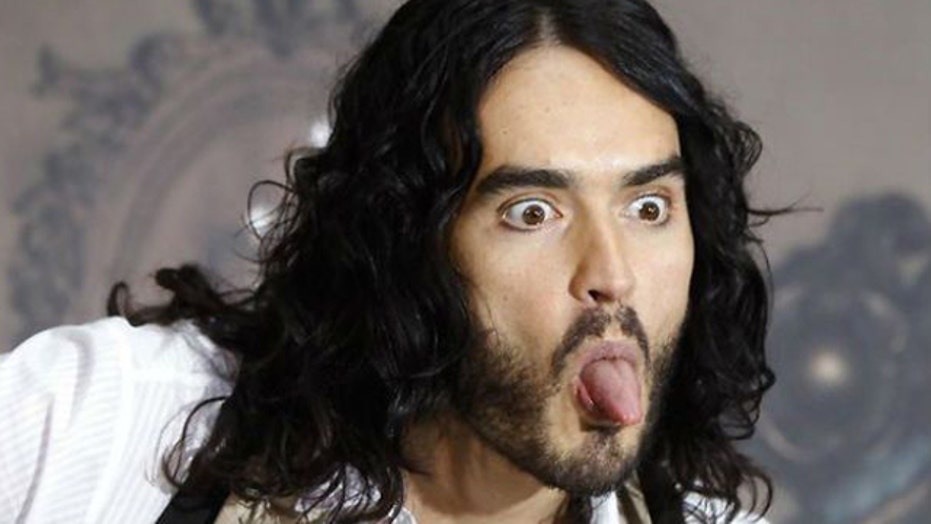 This is a rush transcript from "Hannity," July 30, 2014. This copy may not be in its final form and may be updated.

SEAN HANNITY, HOST: Yesterday Russell Brand, a D-list actor better known for his failed marriage to Katy Perry, recorded himself going on a 12 and a half minute tirade against little old me. Take a look.

RUSSELL BRAND, ACTOR: I don't normally pay a tribute but Sean Hannity does look a bit like the Ken doll in the "Toy Story 3" film.

Also he has his name on a police batch on the quarter of the screen, "Hannity." A police badge with stars above it.

BRAND: Look at Sean's so pleased with that. Is Hamas, a terrorist organization? "Don't answer a question with a question. That's another one of the rules I have."

HANNITY: Not funny. Anyway, ouch. I feel so bad that Russell doesn't like my style of interviewing. Unfortunately this out of work actor didn't stop at stylistic critiques. He had this to say about the crisis in the Middle East, as ignorant as he is.

BRAND: More countries like Palestine -- there isn't even a Palestine now. The Gaza Strip, they don't even have an army. They don't have one. So like if they're in any way going to try to defend themselves, it's going to be through what we would perceive or term as acts of terror. But that's just language really.

HANNITY: And 3,000 rockets, Russell, fired into Israel, two-thirds of the Israeli population in bunkers in just the last month. Now, Russell, if you're watching, and I'm sure you will, take a close look at your TV because I need to educate you because you're kind of dumb and ignorant.

Now, this, what I'm about to show you to educate you, is the charter of the internationally recognized terror group Hamas. I'll read it with you to help you. "Israel will exist and will continue to exist until Islam will obliterate it just as it obliterated others before it." In fact, Hamas will seek to destroy Israel at any cost even by using fellow Palestinian women and children as human shields. Apparently Russell can't get it through his thick head and possibly fathom that this is the reality.

Joining us now is Bernard McGuirk.

GERALDO RIVERA, FOX NEWS SENIOR CORRESPONDENT: I would say he got that one right.

HANNITY: And Geraldo and Dagen.

RIVERA: You look like that thing on top of the wedding cake. Handsome, don't get me wrong.

MCGUIRK: That's not bad. Not bad.

HANNITY: Well, he refers to me as a terrorist. Watch this part.

BRAND: Who in that situation was behaving like a terrorist, using intimidation, bullying, being unreasonable. Sean Hannity. That is where the terrorism is coming from.

MCGUIRK: I mean, this guy has got a skanky look. He looks like he cooks meth and sleeps in his car.

MCGUIRK: You can't understand him, either. At least you understand Ricky Gervais. No wonder the guy is not working.

RIVERA: He's a doofus, which is unfortunate, and his attack on you unwarranted. Still, I think that there are two sides of the story that are not necessarily being told.

RIVERA: And 1,300 dead civilians, 30 to 40 percent of them children, Sean. This is the worst thing for Israel's stature in the world. It's fuelling anti-Semitism. It's going to accomplish very, very little but prolong this crisis.

HANNITY: If 3,000 rockets were fired into America wouldn't you obliterate the infrastructure of the group responsible?

RIVERA: Michael Bloomberg came home from Israel last week saying open the airport. These rockets are ineffective. The Iron Dome has got them solid. How many people have been killed by the rockets? You have seen what happened in that hospital. We've seen what happened at the U.N. school today. Sean, we can no longer ignore what's happening.

MCDOWELL: I actually do have something to say about that, because particularly to get back to the celebrities that are pro-Palestine and increasingly anti-Israel, why don't they go after Hamas? Why don't they tell Hamas to stop using hospitals as command centers and using civilian site for military purposes, because they increasingly sound just like Russell brand, like they're drinking cocktails of stupidly and bigotry.

MCGUIRK: You have to remember that this guy got fired from MTV for showing up the day after 9/11 dressed as Usama bin Laden.

HANNITY: Who started this conflict? Hamas.

MCGUIRK: He thinks he doesn't believe in Israel's fundamental right to --

HANNITY: You destroy the tunnels. You find the rockets.

RIVERA: We have to find a permanent peace solution. We have to end the occupation.

HANNITY: How do you have peace with a group that wants to obliterate you?

HANNITY: And the Brits obliterated cities in Germany after the bombing of Britain.

RIVERA: Japan, we made friends with Japan. You make peace out of your enemies.

HANNITY: They changed after we bombed them.

RIVERA: (INAUDIBLE) and Anwar Sadat did. We have to put walls between these people.

HANNITY: Anwar Sadat's not alive. He was killed.

MCDOWELL: These people do not -- these ignorant stars don't want peace. You had 100 Spanish stars including Penelope Cruz and Javier Bardem wrote an open letter accusing Israel of genocide. We ought to be very, very afraid about what is going on in Europe.

HANNITY: You know what's scary is everything is backwards. I have to tell you, if you don't have moral clarity that Israel has right to defend themselves here, Bernie, I think this world is screwed up.

MCGUIRK: Israel is here to stay.

RIVERA: And I would die for Israel. Can you imagine what it does with Jewish children that were killed?

HANNITY: They're trying to kill them.

MCGUIRK: It's horrible that Palestinian children are being killed.

RIVERA: We would be all volunteering now to go and wipe them out.

RIVERA: I've covered every conflict there. I have a Jewish star tattooed on my wrist. I would die for Israel. Israel is wrongheaded about this.  They're gone way too far.

HANNITY: You're wrong. They haven't gone far enough and have shown too much restraint.

RIVERA: You want to wipe out everybody there?

HANNITY: I want to wipe out Hamas, a terror group dedicated to Israel's destruction.

RIVERA: How are we going to do that?

HANNITY: Militarily take them out.

RIVERA: What are you going to do?

HANNITY: They're killing the infrastructure. They've got 50 tunnels.

HANNITY: We have to go.

MCGUIRK: If you want Russell Brand to shut up have Mark Levin attack him. It worked with John Stewart.