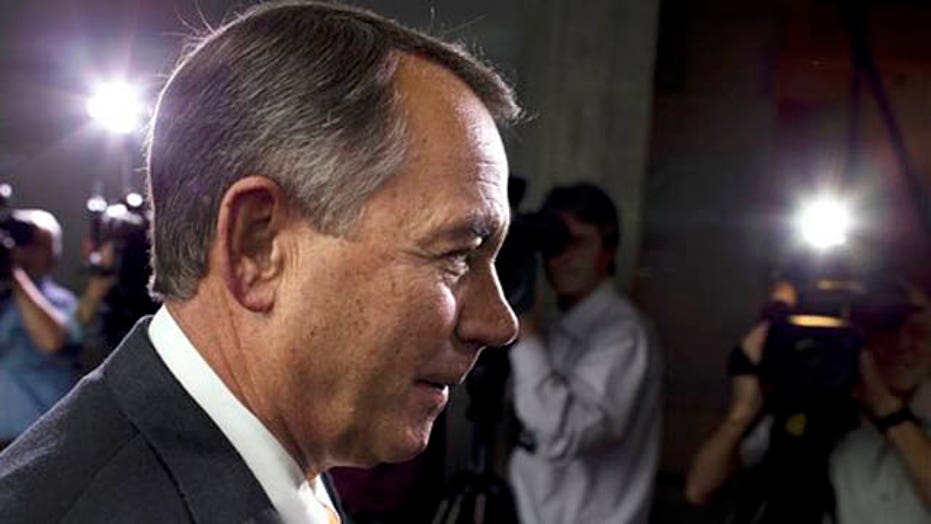 This is a rush transcript from "The Kelly File," October 16, 2013. This copy may not be in its final form and may be updated.

MEGYN KELLY, HOST: Guy Benson is a radio talk show host, political editor at Townhall.com, and a Fox News contributor. So, Harry Reid says that this happened for no good reason. Meantime, you have a large caucus in the House saying, we went down, we went down fighting and it's about time. Your thoughts?

GUY BENSON, RADIO TALK SHOW HOST: First of all, Megyn, congratulations on the show and your empirically verified ratings bonanza.

BENSON: It is great to be here.

As to your question, look, I think you played the clip from Harry Reid. He's probably gloating a little bit tonight. And he should. He set a trap for Republicans. They walked into it. They collapsed yesterday setting up this situation where he was in the driver's seat. You can't really spin what happens tonight, any other way than a loss for a fractured shambolic Republican Party at the moment.

I think the best thing actually Megyn for the party is that these crises are at least temporarily over. And now the real attention can shift over to the slow motion, jaw dropping train wreck that is the president's health care law.

KELLY: You know, it may be a win for Harry Reid. It doesn't look like a win for the American people when you look at the debt clock.

BENSON: No one thinks --

KELLY: That's what's underlying this whole discussion. OK. All right. Great. So, now we have -- now, they're going to raise the limit, so they continued to pay down the interest on this. They are not paying down the debt. And this is the problem we go through time and time and time again. Which is, we have a $17 trillion debt and no one has the courage in Washington to meaningfully address it. I mean, this time it was barely touched. Yes, the fight was over ObamaCare. Where was the discussion about reform on entitlement spending? Where was anything? Where was the leadership on that on either side?

BENSON: Absent, because this fight was about other things. Now, if you want to look at the actual problem itself, which is the debt, which you mentioned, really wasn't dealt with it all here. You said the debt isn't being paid down. It's worse, Megyn, it's getting worse and worse. It is growing exponentially especially with our long-term entitlement programs and our unpaid for promises known as liabilities. And that $17 trillion number scratches the surface. That's the official number on paper.

When you take all of those extra promises that we have already made to the American people and have no way of paying for, the number is actually closer to $90 trillion with a t dollars, according to several members of President Clinton's debt commission back from the early '90s.

So, there is going to be a conference committee. One of the elements of the deal that just passed the Senate is, the House and the Senate are going to both appoint conferees, sit together for the first time in four years, and try to actually hammer out some sort of agreement that deals with the spending and debt issue. We'll see how that goes.

KELLY: This is like, you know, a husband and wife in a bitter divorce. They haven't been able to talk or work anything out in their divorce proceedings for four years. And on year five, the judge finally says, sit down and have a conversation. High hopes.