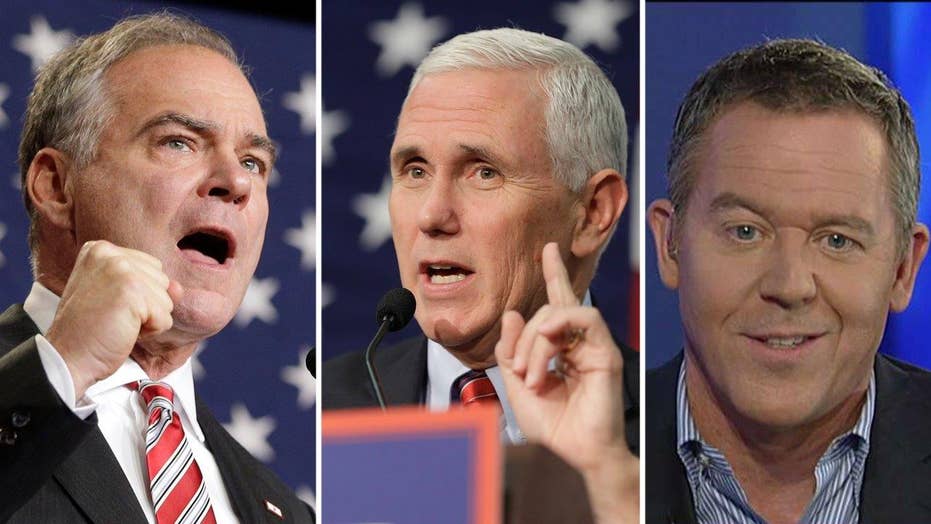 Gutfeld: Why the 'heartbeat away' debate matters

Forget about the presidential debates, tonight is the debate that matters most. For these two guys are what's behind that glass we break in case of emergency.

Who are they? Tim Pence and Mike Kaine.

Sorry: Mike Pence and Tim Kaine. Or is it Mike Tim and Pence Kaine? Not that it matters: 4 out of 10 don't know them even though this is the "heartbeat away" crew.

This guy or that guy. What do we know about them?

They're white men, of course. In fact, they're so vanilla you're tempted to scoop them onto a slice of apple pie.

One has a musical mouth and one has a dirty mouth.

Neither were picked by the candidate: Hillary wanted Huma and Trump wanted Vladimir.

Kaine and Pence: These mild extras from Allstate commercials were picked to calm a country worried about the other two. On a menu that only serves raw carp, Kaine and Pence are the chicken fingers.

So the debate will be those two fellas defending their guy or gal. Kaine will say Hillary isn't corrupt; Pence will say Trump isn't nuts.

They are the mousey spouses to their harsh partners. When their significant other is puking into a planter at a party, it's up to the Kaines and Pences of the world to say, "He didn't mean that" or "Sorry, she's not feeling well." Better halves are boring, but necessary.

Last, these VPs are religious, so the presidential choice doesn't have to be. They secularized the campaign. So instead of debating over abortion or gay marriage, we've moved onto vital stuff, like sex tapes and overweight beauty queens.

Glad we finally got to what matters.