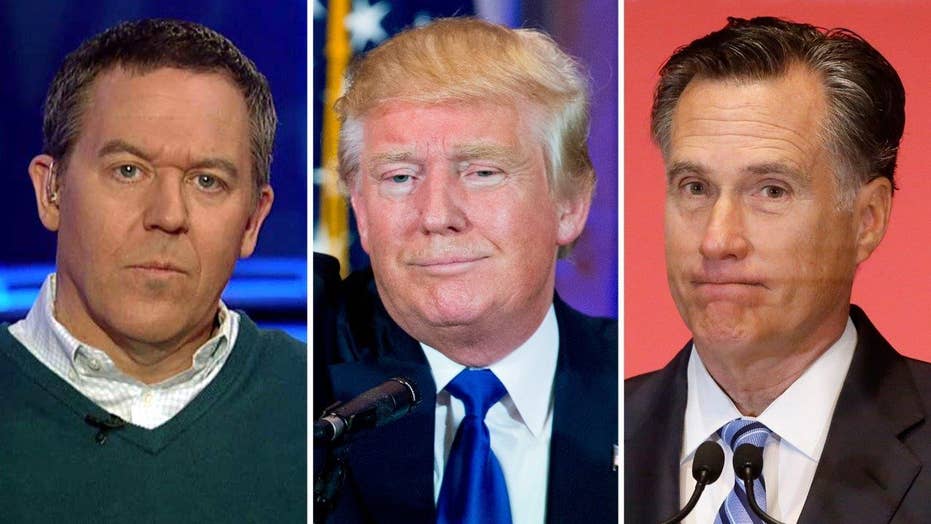 Gutfeld: What Trump should take away from Romney's tirade

The Donald has his fans. Now it's time to convince the rest of the Republican Party

His name is Mitt, and off came the gloves:

MITT ROMNEY, FORMER REPUBLICAN PRESIDENTIAL NOMINEE: Wait, wait, wait. Isn't' huge business success? Does he know what he is talking about? No, he isn't, and no, he doesn't.

His bankruptcies have crushed small businesses and the men and women who work for them.

I predict that he told the New York Time that his immigration talk is just that. Talk.

There's a dark irony in his boasts of his sexual exploits during the Vietnam War. While at the same time, John McCain, who he has mocked, was in prison and tortured.

A person so untrustworthy and dishonest as Hillary Clinton must not become president. The Trump nomination enables her victory.

ROMNEY: Donald Trump is a phony, a fraud. His promises are as worthless as a degree from Trump University

Playing the members of the American public for suckers, he gets a free ride to the White House, and all we get is a lousy hat.

Donald Trump tells us that he is very, very smart.

I'm afraid that when it comes to foreign policy, he is very, very not smart.

Ouch, Mitt. Don't get so rough.

So was this a good idea? Frankly, I don't know. Call it return fire after months of abuse. See Trump's aggressiveness is often lauded by those who love how he tells it like it is. But when other people tell it like it is, boo-hoo. So they'll hit Mitt for speaking out against the frontrunner, while they demanded allegiance before the primaries began.

But if Trump reflects anger, Mitt reflects concern. So why not listen to both? Here's why: You will not win without reconciliation. It is no longer Trump who has the power, but those holding fast to their principles. Those authentic conservatives smeared as losers because they didn't fall for Trump like a farm girl fresh off the bus in a big city. You think you're angry? Try those people. And if you don't convince them, you'll use.

So why not persuade, Donald? No more shouting "China" until you're blue in your face. If you put off 55 percent of Republicans, maybe stop putting them on. You've got the fans, get the rest. The truth: When Romney ran, we wished he was more like Trump. We wanted a pit bull, I know, I did. Now with Trump, we wish he was more like Romney: less attack, more tact. Can't we have both?

Trump seems ready, but it's tough to expect unity after insulting everyone for so long. But if you want it, come and get it or lose to Hillary. Parading Christie out like a prized carp ain't enough. Unlike him, we aren't for sale.