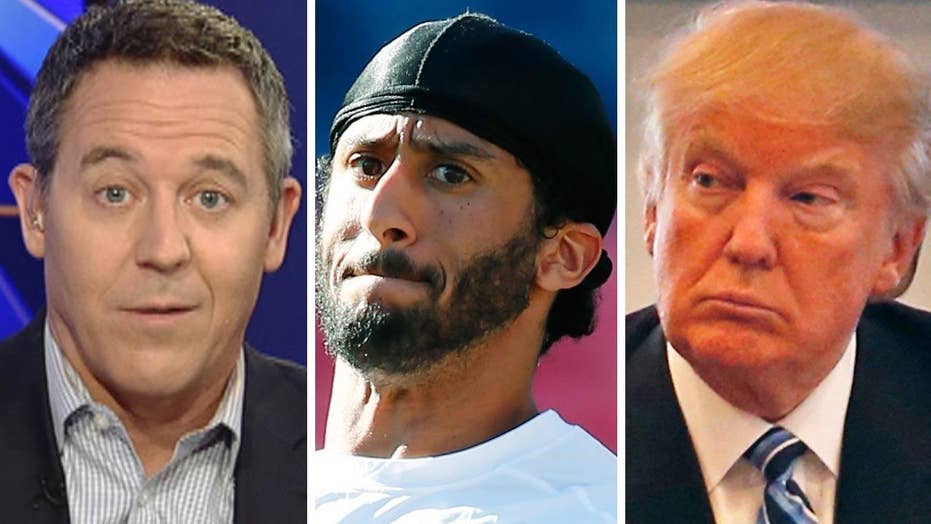 Gutfeld: What Colin Kaepernick, Donald Trump have in common

Their acts of expression do nothing to unify

One took his seat, another chose to tweet. First, a backup quarterback for the 49ers sits for the national anthem. Now, you figure a guy who has been riding a bench all season would want to stand just for the exercise. But he was protesting oppression, linking it to patriotism. I wonder if he'll continue to sit?

So, is he right? Is our country more or less oppressive than others? If America oppresses, why do so many people risk their lives coming here to be oppressed? We do know this: Our flag represents a country where you don't have to stand up. That is the opposite of oppression, you dope. People die so you have that right to sit and mope. And in return, we can choose to mock or ignore the pampered athlete who seeks such attention.

Meanwhile, Donald Trump keeps tweeting. This one after another shooting death in Chicago, he tweets: "Dwyane Wade's cousin was just shot and killed walking her baby in Chicago. Just what I've been saying, African-Americans will vote Trump." So after a mom's shot dead your first instinct is to shout, I told you so? Is it our fault to expect more from a candidate, please?

Bottom-line: Both acts of expression do nothing to unify this country. Instead, they overshadow one fact -- that it took a star athlete's relative to die in Chicago for that violence to once again matter. Trump's tweets are infantile. And the cute QB was selfish. But they didn't kill anyone, nor will their actions save anyone either.