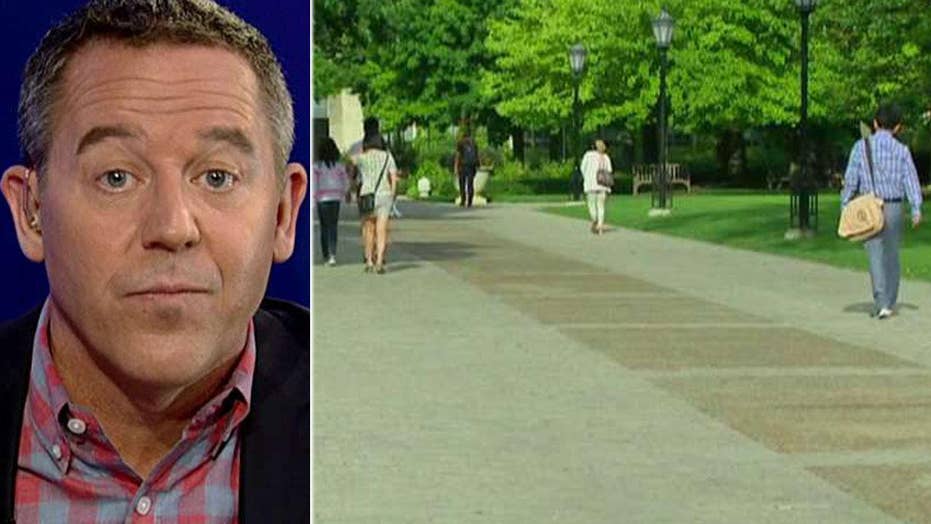 Gutfeld: The ultimate 'safe space' is a coffin

Where there is life, there is risk

A few weeks ago the University of Chicago dean of students sent a letter to new freshmen where he bravely rejected "safe spaces." Safe spaces are where ideas different from the students' are banned. His point: A real education requires debate, not ball pits for babies.

Well, a new letter signed by more than 150 faculty disagrees, saying students should demand areas free from other points of view.

They say safe spaces are needed for the "free exchange of ideas." Yes, blocking different ideas is now part of a free exchange. That's diversity?

They also lauded "trigger warnings," which warn the weak of ideas that might cause a boo-boo.

But shouldn't this faculty letter require a trigger warning? After all, it insults the students claiming they need psychological bubble wrap.

Fact is, safe spaces are less safe than lawn darts dipped in rat poison. For those who flee to villas of victimhood never learn conflict resolution and will flunk the real world. The real world is no safe space. Try eating at Chipotle.

So, the real students who engage in the battle of ideas -- and it is a battle -- will flourish, while the safe spacers become a new soft, spineless underclass. Imagine applying safe spaces into other arenas like sports, military, work. You'd never grow.

Demanding immunity from such challenges is demanding an exemption from life. After all, the ultimate safe space is a coffin.