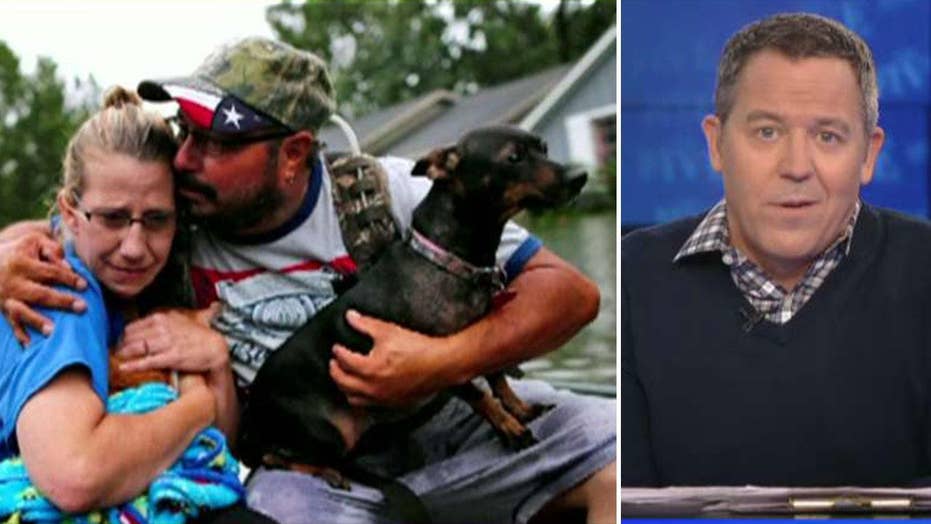 Gutfeld on what the storm teaches us

Disaster rescues us from the delusion of division

If you were to describe these last few days with one word, it would be "rescued" because all we see are people being rescued -- pets too -- from rooftops, from cars. But you're also seeing another kind of rescue, one from all of those conflicts that occurred before the flood. Stuff about statues and privilege and gender identity and trigger warnings -- these stories still exist, but in times of crisis, they seem to fade. But some still pop up as a reminder of how things used to be.

Right now there are cities planning to replace Columbus Day with "Indigenous Day." I don't know what to think except that it's got to be cool to have all that time on your hands to debate that stuff in dry comfortable weather. Meanwhile, people are being airlifted from certain death. It's such a powerful contrast, at least to me.

Now, these conflicts over statues and historical figures, they exist in good times because we have the time to discuss it. But a disaster rescues us from such a reoccurring division. Now I know, we're supposed to hate each other says the media. And it must be hard for identity activists to see folks in trucker hats or hoodies, rescuing people of all stripes. They can't wait to get back to the rage when the waters recede. But for now, tribulation silences all tribes.

It's the calm that came with a terrible storm.