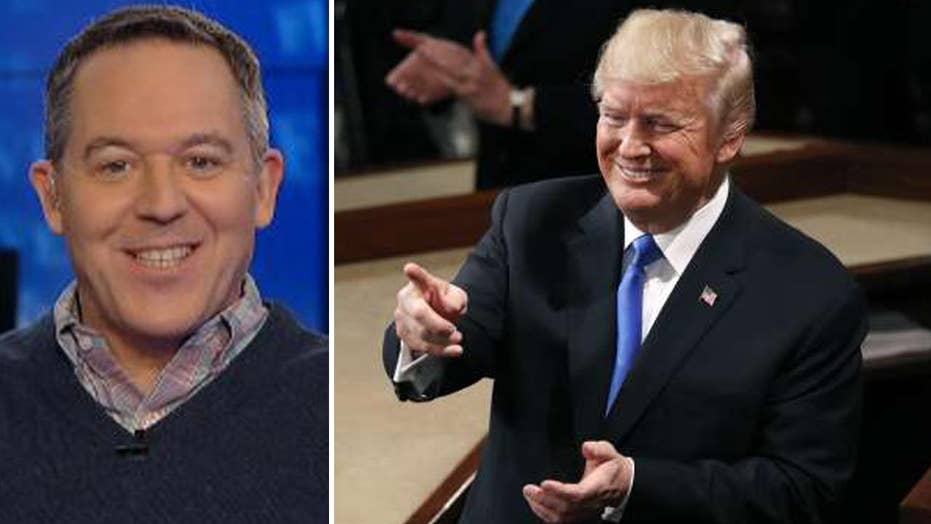 Gutfeld on Trump's State of the Union

The State of the Union showed that the 'loyal opposition' can't let go of their emotionally clouded bias.

Before we cover the speech some more, let's take a test: In terms of success, who would you rather be? This or this?

It's good to start with perspective, given that most polls show widespread approval, upwards of 75 percent for Trump's speech. Still, the loyal opposition couldn't let go of their emotionally clouded bias. Juan. As Trump mentioned, good news, they frowned. One clown even bolted when a patriotic chant broke out. And they speak of division? They sat when they should have stood. Even for the flag. Do you think Americans didn't notice that? Trump placed that moment right in our faces.

The Dems are confused. Trump is hitting all the high notes and they don't know what to do. They're officially Dean dewormer for "Animal House," always scowling at good news.

Schumer looked like he didn't know whether to wind his watch or cry. Pelosi looks like she discovered her chauffeur had just broken wind. And when Trump called out socialism, half the Dems looked nervously toward the exits. Someone should have checked on Bernie Sanders. Did he expire from too much common sense?

If the old saying is true, that progressivism is the fear that someone somewhere is making America look good, then this was a really bad night for progressives. It's why the media couldn't handle it either:

CHUCK TODD, NBC NEWS: Immigration is his one opportunity to have a big success quickly, but I have to tell you I think his rhetoric last night set things back, did not advance the ball forward.

MATTHEW DOWD, POLITICAL CONSULTANT: Calling this a healing speech is almost like calling - - going on a diet by drinking a diet coke and eating a pizza. That's as much of a healing speech this was.

MIKA BRZEZINSKI, NBC NEWS: You tell me that room is supposed to respond like this to the great dictator?

GUTFELD: That was like her when he was running.

So, Trump set a trap for the Dems and the media that expose their biases. But, hey, everyone has a role to play. And in team sport politics, someone has got to be the loser, Pelosi, Schumer, the hapless media. They do it all so well.