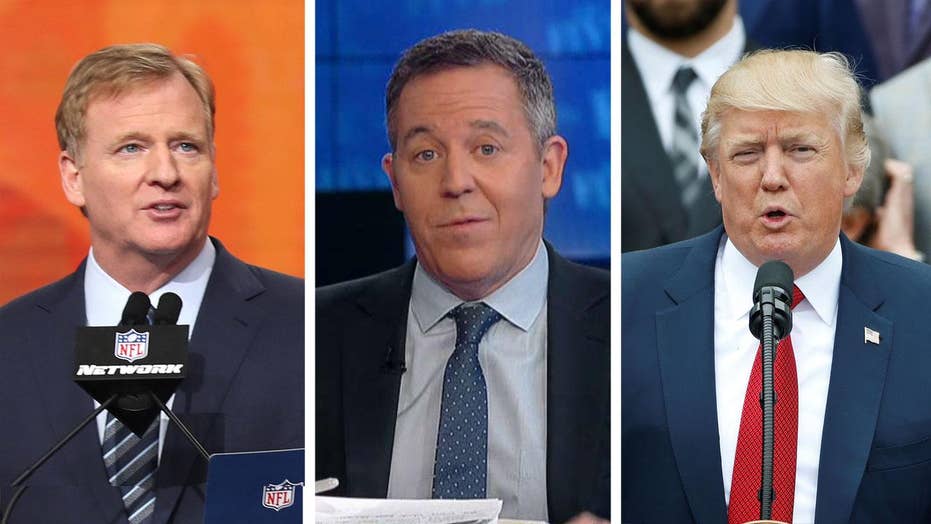 Gutfeld on Trump's response to the NFL ruling

It's Day 2 in "kneel-gate" and, as usual, both sides line up on opposite ends of the field. First, there's Donald Trump doing Donald Trump:

You have to stand proudly for the national anthem. And, the NFL owners did the right thing if that's what they're done.

Yes, another excellent, hard-hitting interview from Mr. Kilmeade. Give that guy a raise or at least something to stand on.

The fact is you expect that from Trump. He finds an issue and he takes the hard-line stance. Whining about it would be pointless. He's your uncle -- Uncle Sam. But that didn't stop the pearl clutchers from clutching their pearls.

JOY BEHAR, "THE VIEW": The racism is disgraceful.

If you're a football player, or whatever they are, any sports guy who have the position to do it, do it.

PRINCETON PROFESSOR EDDIE GLAUDE JR.: It's ridiculous, it's absurd. He sounds a lot like Erdogan right there, doesn't he? He doesn't sound like the leader of the free world.

MIKE LUPICA, NY DAILY NEWS: And remember how this all started. Speaking to a crowd that looked like an SCC white football crowd in 1955, calling them SOBs and saying they should be fired. In what world other than his is that OK?

See, they miss the point: The First Amendment is a right held by every citizen against the government. But, a private entity like the NFL, they own it, they make the rules. As long as there's no discrimination the NFL can mandate that teams play in high heels and referees wear tutus. It's their ball they can take it and go home. And the players can protest, but they will be penalized if it's done during a game --penalized not jailed. Only the government can jail you. You see the difference? Players are employees at work disobeying a rule.

So, where are you in all of this? Where you've always been, scratching your head. You prefer unity over conflict. You don't mind dissent. It's the dissension where there not need be. Mind you, you still love a good debate. It's why you watch "The Five." But a political act within a sporting event is like turning on this very show and finding me and Dana playing badminton for an hour. It's not what you came here for. It's not why you watch. And let be honest, seeing me in tight white shorts is not appropriate for 5 p.m.