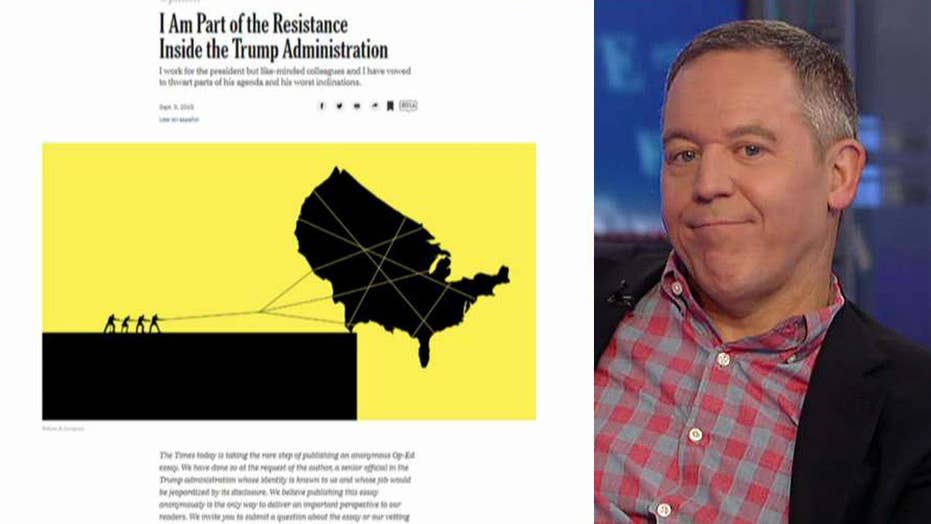 Gutfeld on the true identity of the op-ed writer

Do you want to know who's really ticked off about that op-ed by an anonymous but very important Trump official? This guy.

BOB WOODWARD, AUTHOR OF 'FEAR': I wouldn't have used it.

Now why would Bob say that? That's an insider's view. He knows that The Times ran that piece to trim the sales of his new book and hurt the paper's chief rival, The Washington Post. The Times was Tonya Harding and Woodward was Nancy Kerrigan, taking out the legs of Bob's book at the perfect time.

So who wrote the piece? Well, it didn't tell us anything, so it doesn't really matter. If the writers claiming to secretly control Trump's harmful impulses, why write an op-ed piece for the Times? That seems like the worst thing you do to control his impulses. It's like shooting yourself in the foot halfway through a marathon. So whoever wrote this didn't think it through and it could be absolutely anybody -- anybody. Mattis, sure. Pompeo, OK. Ivanka, definitely, probably. The assistant deputy secretary of commerce, why not? Doris in shipping? Yeah.

In fact, if anything is possible, why not some guy at The Times? The Jayson Blair of the moment, somebody acting out of concern to save America just like the piece said. Crazier things have happened. The Times once endorsed Anthony Weiner.

So, if Trump wants to out the op-ed operative, all he's got to say is, hey, we looked into everyone here, so it must be somebody at The Times. Must be, could be, what's the difference? So, yeah, it could be the undersecretary for ditches and pipes or it could be Paul Krugman. Except, even The Times knows that if they Krugman's name on it, nobody will read it.