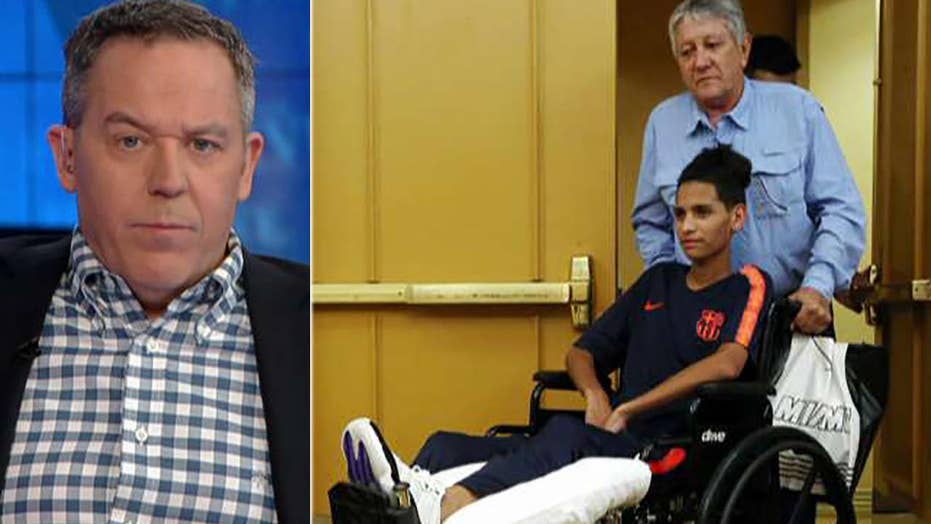 Gutfeld on the overlooked Parkland hero

It's been over six weeks since the Parkland shooting. During that time, we've seen marches, town halls and media spectacles both great and small. Heroes and villains have been made. Spokespersons anointed by cable news. But, up until last Wednesday, one person didn't take part because he had been shot five times as he tried to protect his fellow classmates.

Anthony Borges was released from the hospital, a teen no one had heard from until now. He saved upwards of 20 students. His attorney read a statement from him, which criticized the Sheriff Scott Israel, and others for knowing that the shooter was bad news before the attack but still did nothing:

ALEX ARREZA, ATTORNEY FOR ANTHONY BORGES: Both of you failed us, students, teachers and parents alike on so many levels. I want to ask you today to please end your policy and agreement that you will not arrest people committing crimes in our schools. I want all of us to move forward and end the environment that allows people like Nikolas Cruz to fall through the cracks. You knew he was a problem years ago, and you did nothing.

Borges was too weak to talk, but his statement was strong. It reminded us of the facts. His criticism took as back to what was reveled post-attack: That tons of calls were made about the shooter over the years that he had emotional and disciplinary issues before coming to Stoneman Douglas. He was abusive. Still, none took action. The statement also mentions the PROMISE Program which allows young criminals to avoid arrest.

So, the question is, will this messenger receive the same platform and spotlight that others received? It's a sad reality in the world of cable news: We have to move on, other tragedies await. But, Anthony cannot move on, which is why we should press pause and listen to what he's trying to tell us. He cannot move on. The fact that Scott Israel can is a disgrace.