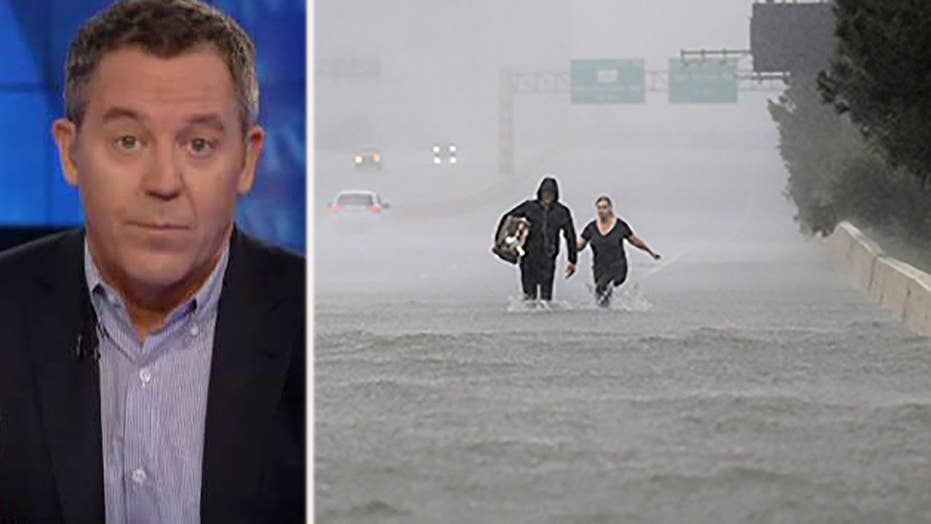 Gutfeld on America uniting in the face of disaster

As another big hurricane heads our way, let's not forget Harvey and what it showed us after all that havoc. We saw a Category 6 downpour of compassionate action. Anyone still bickering over politics appeared petty, no different than the guy complaining that his steak is overcooked to a starving child. The extremists who before could easily find a spotlight are left shouting at the bedroom mirror. So, what's left? Cooperation.

Let's take this debt deal. I know: How dare Donald Trump make a deal with evil Nancy Pelosi? Conservatives are really ticked. But this is clearly related to the hurricanes. What's he supposed to do? And should you be surprised? He was a dealmaker before he was a Republican. We knew that. It's one reason he won. Trump does which suits him or what suits America. And that's the point. You can disagree with him on small stuff. But if you think that he gets the big picture, then so what? That "America first" stuff? What if he means that? Then party line deviations are forgivable. After all, all he did was put America first -- or in this very case, an American crisis first -- figuring that the food fights can happen three months from now and they will.

The media is shocked but you are not. Trump may know what America is looking for right now and it is not a fight. Not when you are reeling from two hurricanes. You want help, not haggling. The tiffs can come later when everyone is safe and dry.

And so, as we unite to face this threats, I feel for the critics. But as Rachel Maddow said to Chris Matthews: Darling, we'll always have Russia.