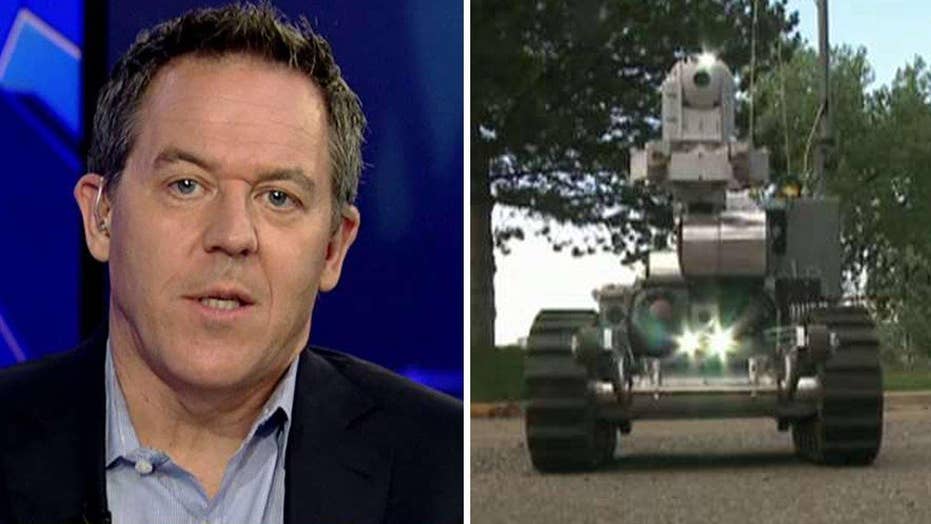 Gutfeld: Nothing wrong with using a robot to kill a fiend

Critics question military tactics for domestic policing. My response? If it works, use it

The great thing about TV: It's full of people who know so much more than everyone else, including stuff they know nothing about.

After Dallas, TV hacks questioned the decision to use a robot to kill a madman. After hours of negotiations in which the killer expressed joy over killing a few police officers and was dying to kill more, it was clear: He was better off dead. So Dallas PD sent in a robot to kill a fiend. But of course, the media wondered if this is just more proof of militarization, a move toward cold, metallic lethality:

KRIS VAN CLEAVE, CBS NEWS CORRESPONDENT: Bomb squads will tell you these robots can do pretty much anything a person can do. They can go upstairs. They have cameras. They have speakers so that they can communicate. They also have these arms, and those arms will typically be used to investigate a suspicious package, but some police departments have used them to do things like deliver tear gas to subdue a suspect. But for a police department to use a robot to kill, that was unprecedented.

TOM COSTELLO, NBC CORRESPONDENT: The discussion really is about how this is just the latest example of law enforcement turning to military tactics for domestic policing and whether that's simply what comes with a more heavily armed society.

GUTFELD: OK. So this questionable tactic went too far? The police adopted military tactics for domestic policing that was stolen from the wars in Iraq and Afghanistan? My response: So what? If it works, use it. The creep had already killed five; it would have been a crime to put any more people at risk. A robot mitigates that risk. Even more: Given the relentless scrutiny, now directed at exposing the errors of our human police officers, aren't machines the answer? You can't have it both ways. You can't expect officers to act like robots and then whine when robots assume their duties. And you can't ever accuse a robot of racial bias.

So in time, will it be self-driving patrol cars operated by souless, single-minded bots? You hope not. You don't want a perfect police force. You want a human one. But for now that robot killing a fiend, that was a life-saving act learned from the battlefield. So to paraphrase in an old song: War, what is it good for? Absolutely something.