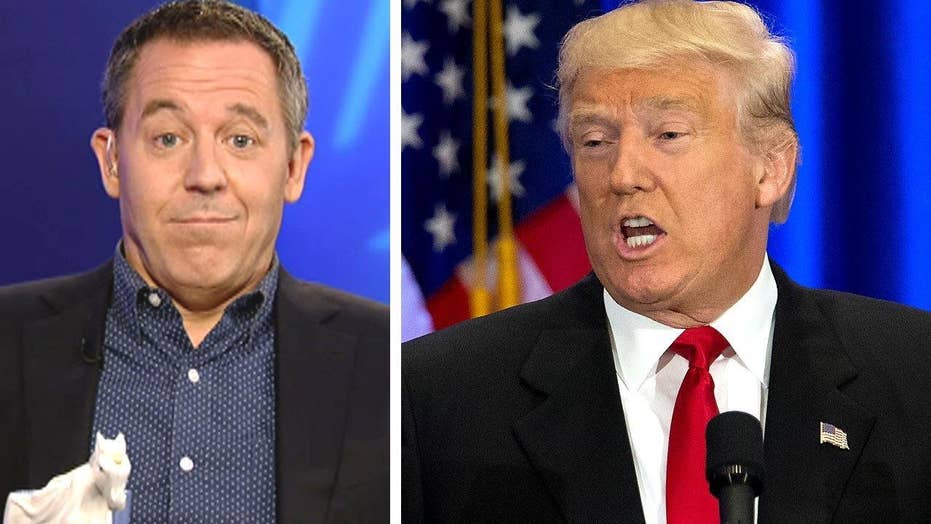 When Donald Trump takes off the gloves, he adds brass knuckles, a blow torch and death metal

Calling Donald Trump's attack on Hillary today "a speech" is like calling D-Day a nature hike:

DONALD TRUMP, PRESUMPTIVE REPUBLICAN PRESIDENTIAL NOMINEE: Hillary Clinton, and as you know she -- most people know, she's a world-class liar.

Hillary Clinton has perfected the politics of personal profit and even theft. She gets rich making you poor.

No secretary of state has been more wrong, more often and in more places --

Her decisions spread death, destruction and terrorism, everywhere she touched.

ISIS threatens us today because of the decisions Hillary Clinton has made.

Hillary Clinton may be the most corrupt person ever to seek the presidency of the United States.

GUTFELD: There you go. He accused her of murder, corruption, lies, creating ISIS, appeasing enslavers and rapists, destroying the entire Middle East. The speech wasn't just a vehicle, it was a dump truck unloading steaming, wet garbage on Hillary's head. The only things he didn't blame her for were "Zoolander 2," man buns and coconut water.

Yeah, I know. What you're seeing is "opposite-Romney." Trump not only takes off the gloves, he adds brass knuckles, a blow torch and death metal. He also employed political jiu-jitsu. Trump took the criticisms about his temperament, put them in a t-shirt cannon and fired them right back.

TRUMP: She simply lacks the integrity and temperament to serve in the office. From the bottom of my soul, I know this to be true. Her leadership style, volcanic, impulsive, disdainful and disdainful of the rules set for everyone else, hasn't changed one bit.

Volcanic, impulsive; you could say the same about Trump and be right. It's Godzilla versus Mechagodzilla and it's going to get ugly, like Tyson versus Holyfield in '97: someone is going to lose an ear. But after Trump's bad week, he needed something to help him forget the financials that are trailing him like toilet paper on a flip-flop. He got stuff wrong today, but he got one thing really right: The wrong, condemning offshore practices he once did himself, exaggerating trade numbers, hitting globalism when Americans like its benefits, also condemning stuff that he was once for, but what he got right was really big.

TRUMP: I am grateful beyond words to the nation that has allowed me to do it. So when people ask me why I am running, I very quickly answer, I'm running to give back to this country which has been so very good to me.

TRUMP: She believes she's entitled to the office. Her campaign slogan is "I'm with her." You know what my response is to that? I'm with you, the American people.

This is the pernicious globalism he should be hitting, reminding us that we come first, that America as an idea is worth keeping and fighting for. It's absurd to find that idea so refreshing, but in the age of Obama, saying such things is like belching in a crowded elevator.