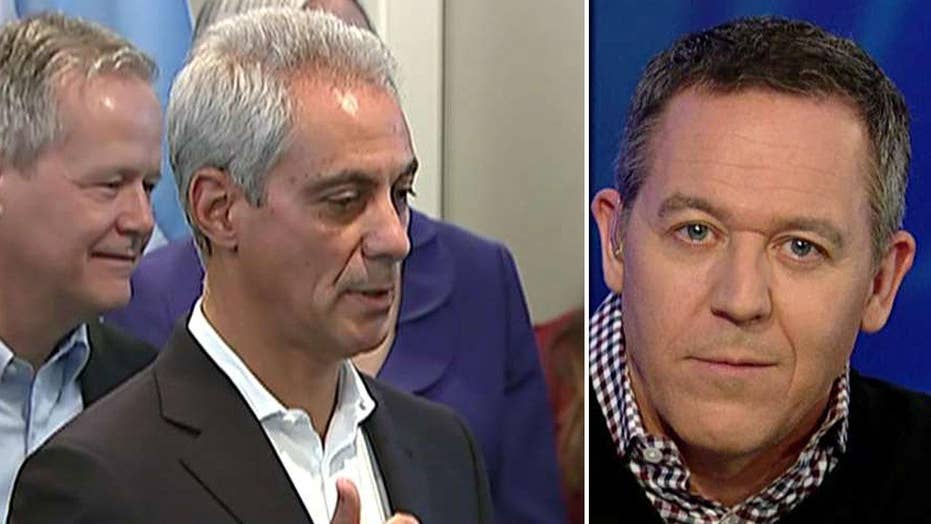 Gutfeld: If I were Rahm, I'd shut up

While bodies pile up in Chicago, Mayor Rahm Emanuel found the time to knock President Trump over his odd obsession with crowd size because that is where Rahm's head needs to be:

RAHM EMANUEL, CHICAGO MAYOR: He got elected to make sure that people have a job, the economy continues to grow, people have security as it relates to their kids' education, et cetera. It wasn't about your crowd size. It was about their lives and their jobs. The most important thing to do is create a relationship between the Oval Office -- the desk in the Oval Office and the issues of the kitchen table. And I don't think in the kitchen tables of America, and I definitely can tell you Saturday at the parade, people were not talking about the crowd size on Friday. I also think the speech missed an opportunity to speak to our better angels as a country.

This guy lecturing people. "Top Ramen" claims that Trump doesn't address the quote issues at the kitchen table. This while in Chicago, people are hiding under kitchen tables to avoid getting shot. As of Monday, Chicago has had 43 homicides, 9 more than the same time period a year ago, a 60 percent surge in homicides or Rahm-icides, if you will. Rahm calls Trump's words bleak, but what of Rahm's actions? There's nothing bleaker than those stats. If I were Rahm, I would shut up and help the police stop the river of red, staining your streets.

But I get why Rahm is ticked off. After eight years of Obama ignoring Rahm's bloody failure, you have a president focusing the spotlight on liberal policies that prevent effective policing and allow for murderous behavior. As the left demean law-abiding gun owners, they turn flaccid when faced with the armed felon. As liberals in charge and a media question the capabilities of police, they then limply ask why there is an anti-police atmosphere or why cops are holding back.

My suggestion to Rahm, ask yourself why homicides are surging in Baltimore, Memphis, Austin, San Antonio, Indianapolis and what they might have in common and then resign.