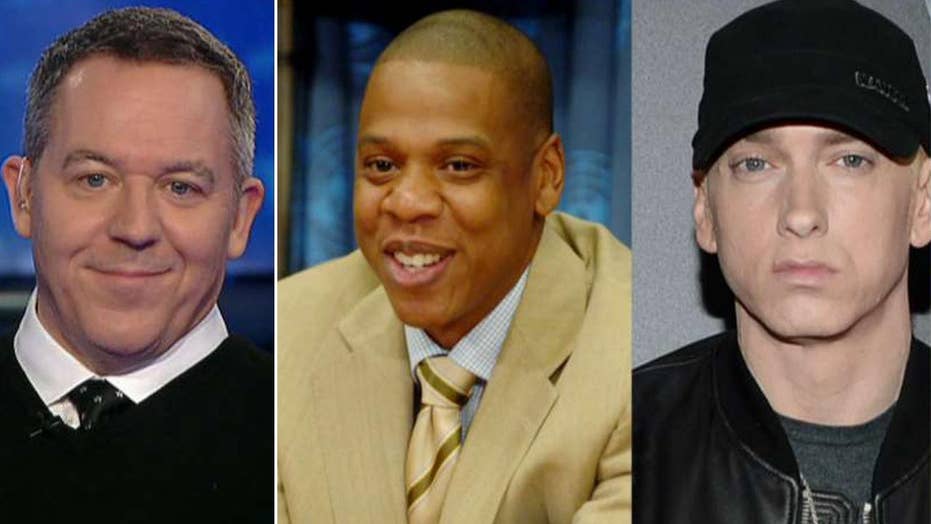 Rappers take aim at President Trump in an attempt to be relevant again.

GREG GUTFELD: Oh, there's a band. So you remember Eminem? Here's a picture in case you forgot. He's still mad at Donald Trump because he won't respond to his sad raps about the president.

EMINEM, ARTIST: That's an awfully hot coffee pot. Should I drop it on Donald Trump, probably not, but that's all I got. Racism is the only thing he's fantastic for because that's how he get his (BLEEP) rocks off and he's orange.

GUTFELD: Gramps is so adorable. Anyway, he just told a music journalist that a, quote, blanking turd would be a better president than Trump.

Eminem says these things to agreeable wimps, I.E., music journalist who never challenge their subjects. If an artist breaks wind, they just giggle and writes how cool it smells. Eminem also says Trump supporters are brainwashed, and that a rich guy like Trump has no business telling the non-rich anything. Yet, Eminem is also filthy rich. Using his logic, why should anyone listen to him? But my question to Eminem is this. Why rage when you can engage? It would be refreshing for him to actually have a conversation with the people he denigrates. If he had the guts, he'd make his points better and not come off as an irrelevant crank.

But he won't. And avoidance of debate reveals weakness in one's own arguments.

But now Jay-Z has knocked Trump, and Trump responded back. That's got to kill Eminem. Apparently, Van Jones asked Jay-Z about the low black unemployment rate under Trump. Jay-Z responded that it's not about money at the end of the day.

Isn't that weird? Pelosi, Jay-Z, Eminem, all stupid rich. One says $1,000 is a crumb. Another says that a job isn't important for happiness. Why is it only the really rich say that? Because they don't need either.

Well, except for Trump. He never says that. Maybe that's why he's president. And they aren't.