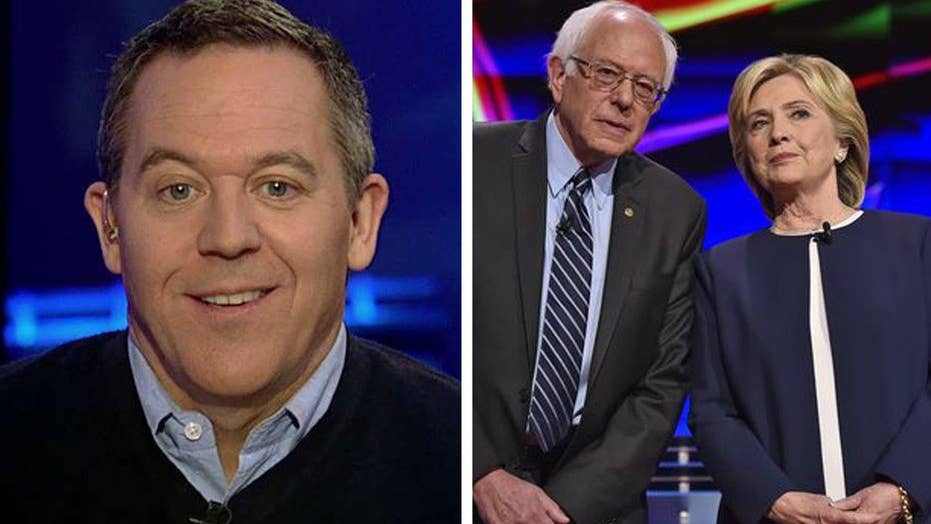 Gutfeld: Can you blame Democrats for hiding their debate?

On Sunday night, American viewers were treated to the crankiest trio since Moe, Larry and Curly

BERNIE SANDERS, DEMOCRATIC PRESIDENTIAL CANDIDATE: There is a responsibility on the part of the pharmaceutical industry and the drug companies who are producing all these drugs and I'm looking at the consequence of it.

We're paying the highest prices in the world for prescription drugs. Getting ripped off.

Look, Bernie, drug salesmen may be greedy, but they aren't cutting people's heads off. But any question about terror ends up being about our own Islamophobia and evil corporations. Terror was about as present as Martin O'Malley's brain matter. Meanwhile, Hillary Clinton took credit for stuff:

HILLARY CLINTON, DEMOCRATIC PRESIDENTIAL CANDIDATE: I'm very proud of the Iran nuclear agreement. I was very pleased to be part of what the president put into action when he took office. I was responsible for getting those sanctions imposed, which put the pressure on Iran that brought them to the negotiating table, which resulted in this agreement.

Always at the right place at the right time. She's Forrest Gump without the charm. She should take credit for the Benghazi flick, after all her lies led to all that. Here's her on drugs:

CLINTON: The policing needs to change. Police officers must be equipped with the antidote to a heroin overdose or an opioid overdose, known as Narcan. They should be able to administer, so should firefighters and others.

Liberals expect so much from the police as they blame them for brutality and racism. And what if a junky dies as a police officer tries to help? Then these goons would charge him with murder.

CLINTON: I would be working in every way that I knew to bring our country together. We do have too much division, too much mean spiritedness.

But minutes later, she says this:

CLINTON: Looking for ways to protect our rights, especially from the concerted Republican assault on voting rights, on women's rights, on gay rights, on civil rights, on workers' rights --

Turning over our White House to the Republicans would be bad for everybody, especially young people.

Of course. She pushes division like a pilled-up Math teacher.

So this three-legged race stumbled toward the same old finish line of lefty smears. The Dems have gone nose blind. Nose blind usually happens in toilets of old pubs -- you adapt to the funk. Now, the Dems got it. They can't smell the stench of their own fetid leaders as they push the same old stink all over us.

As the media slams the Dems for hiding the debate on a late Sunday night, you got to ask yourself this, "Can you blame them?"