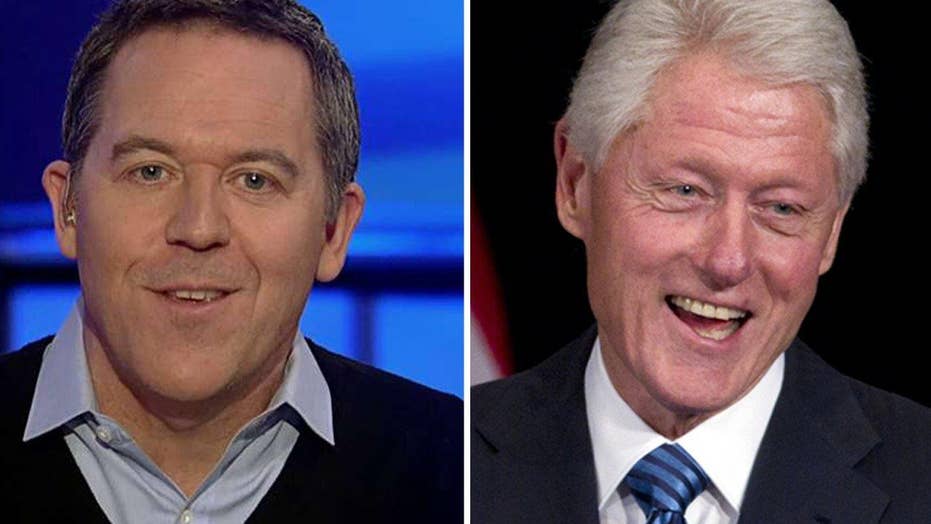 Gutfeld: Bill Clinton too much of a good thing for Hillary?

Once the former president leaves the stage, what are you left with?

Bill Clinton stumped for his wife in New Hampshire with a group of young women behind him. They're safer there. Did you know that soon it will be 45 years ago, in a couple of months, when they met and fell in love?

FORMER PRESIDENT BILL CLINTON: It will soon be 45 years ago in a couple of months when we met. One night, we fell in love. I thought she was the most amazing person because unlike now where more than half of the law students in America are women, then they were a distinct minority. And there she was in a Yale Law School, she could have written her ticket to go anywhere she wanted. All she was really interested in was providing legal services to poor people.

I valued even more a trip she took to South Carolina to see why so many African-American children were being held in adult prisons. It's hard to remember 40 years ago what things were like. She hadn't been elected to anything. But everything she touched she made better.

Everything she touched she made better.

He's great at this stuff. He's like that congenial professor who explains the Big Bang while unzipping his pants. But it's easy for liberals. If your goal is to expand government, then each expansion becomes a trophy that small government righties can never claim. He really is Santa Claus, red nose and all. Sadly for conservatism, our activism is always local. It's in our living rooms. For liberals it's invasive, entering our living rooms, too. And so with Bill, the Republicans face two foes, not just one. But that's Hillary's problem also. For once he leaves the stage then what do you have? Hillary. His charm reminds you it's not him, it's her who's running. He's too much of a good thing, reminding us she might be a bad thing. A minute with Hill erases an hour with Bill. Once she speaks, you're reminded she was a lousy secretary of state, leaving us in turmoil. She blamed videos, contradicted victims' families, dismissed national security concerns. And remember that Russian reset button? Neither does Putin.

So she'll paint Republicans as lady haters. That's fine. Every time she talks about women, just remind her how she treated the powerless ones targeted by her better half. Then focus on Hill's incompetence, as you address the concerns of anxious nation. Don't play the Bill card, play the Hill card. It's an ace, and it beats that joker.