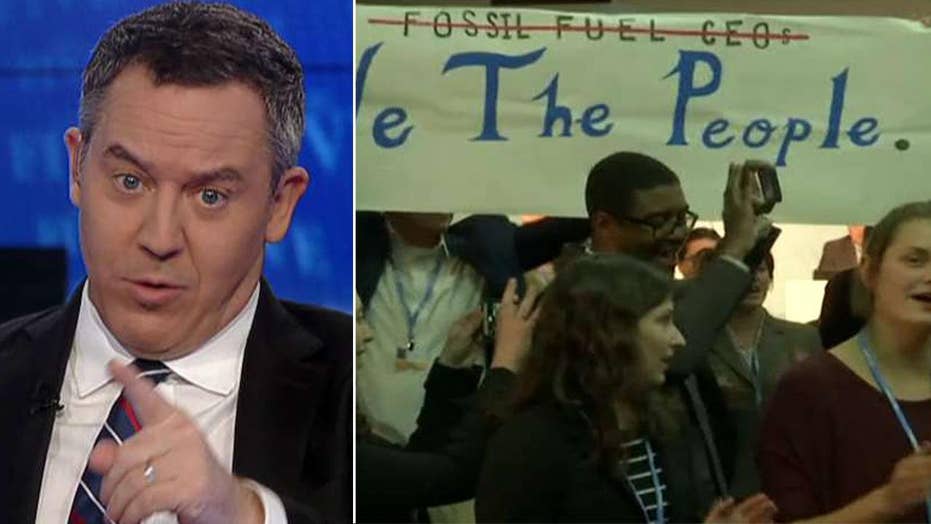 Gutfeld: Another stupid protest at the U.N.

When the administration gave its pitch for coal and nuclear energy at the U.N. conference on climate change -- that's fun -- it was disrupted by evil demonstrators:

PROTESTERS (singing): You claim to be an American, but we see right through your greed. It's killing all across the world for that coal money. And we proudly stand up until you keep it in the ground. The people of the world unite, and we are here to stay.
(END VIDEO CLIP)

Well, that's as catchy as lice -- not as enjoyable. And as surprising as the gas you get after eating a taco supreme.

Trying to speak common sense at the U.N. is like trying to speak Chinese to a table lamp. And anything positive you say is going to get booed. The U.N. prefers dictators and socialism. If you want the U.N. to cheer you, promote failure and death. Their hatred for industry, be it nuclear or coal, is embedded in their hatred, ultimately, for capitalism. Even as we rid the world of its truly worst threat, which is ISIS, they still hate us for trying.

But what can you expect from these climate deniers? That's what these protesters are: climate deniers. They refuse to believe the climate has changed -- one to sober analysis and fact.

Here's what they deny: That coal would save millions of lives in poor countries by replacing the toxic, impure fuels they use and that the Paris Accords was a terrible deal that would also cost lives. You want to spend 100 trillion to capture a fraction of a degree Celsius? Research shows that less than half that cash could rid the world of poverty, hunger, disease and pollution. Using that cash carelessly is homicidal, which could be why the U.N. is in love with it.

By the way, Syria just joined the Paris Accords, and by the U.N.'s logic, that country is far more compassionate than us. So what if you gas your own people? At least that drives down the carbon footprint.